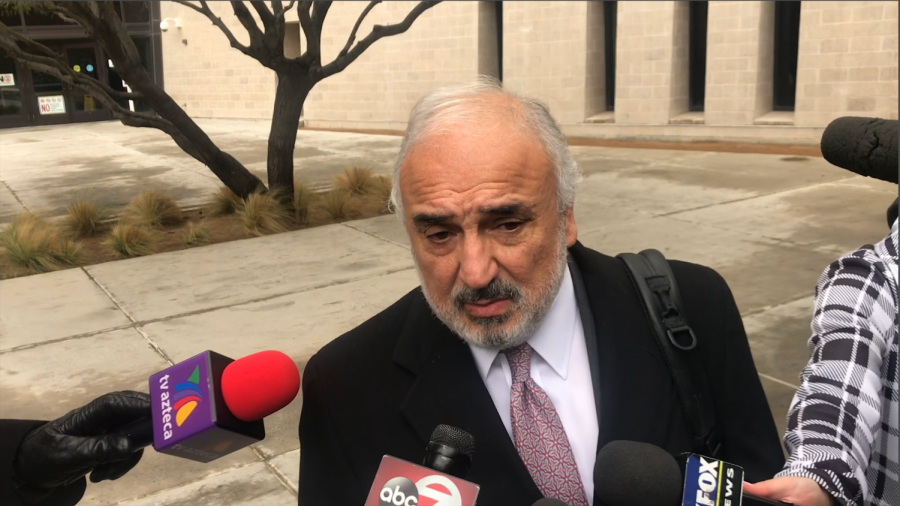 El Paso-based defense attorney Joe Spencer speaks with reporters outside U.S. District Court following a hearing for Patrick Wood Crusius, who is accused of killing 22 people and injuring 23 more in a mass shooting at an El Paso Walmart on Aug. 3, 2019. The 90-count indictment charges Crusius with hate crimes.

Today, Patrick Wood Crusius, 21, the man accused of killing 22 and injuring 23 more in a mass shooting at the Cielo Vista Walmart in El Paso Aug. 3, 2019, appeared at the U.S. District Court for the first time since his federal indictment.

With a courtroom full of attorneys, judges, members of press and family members of the victims, Crusius entered the court of the Western District of Texas in handcuffs, accompanied by federal public defender Rebecca Hudsmith and attorney David Lane.

Today’s appearance comes only a week after the federal district court issued a 90-count indictment against Crusius.

Crusius was brought to a podium ahead of U.S. Magistrate Judge Miguel A. Torres. Without verbal communication, Crusius simply nodded as Judge Torres began to read the charges of the indictment to him and his defense team.

Torres accepted Lane and Crusius’ demands and waived the reading of the charges and the bail hearing.

Lane stated that Crusius’ team is starting this process with the intention of protecting both the rights of the defendant and the victims under the U.S. Constitution.

Torres then provided a summary of the charges against the defendant.

In total, the 90-count indictment charges Crusius with 22 counts of hate crimes resulting in death, 23 hate crimes involving an attempt to kill, and 45 counts of discharging a firearm in relation to the hate crimes. Crusius was notably slimmer now than in past hearings.

When asked about the wellbeing of Crusius, attorney Joe Spencer said, “He is not eating.”

With the detention hearing waived, there are no immediate appearances scheduled for the trial.

Paulina Astrid Spencer may be reached at [email protected]