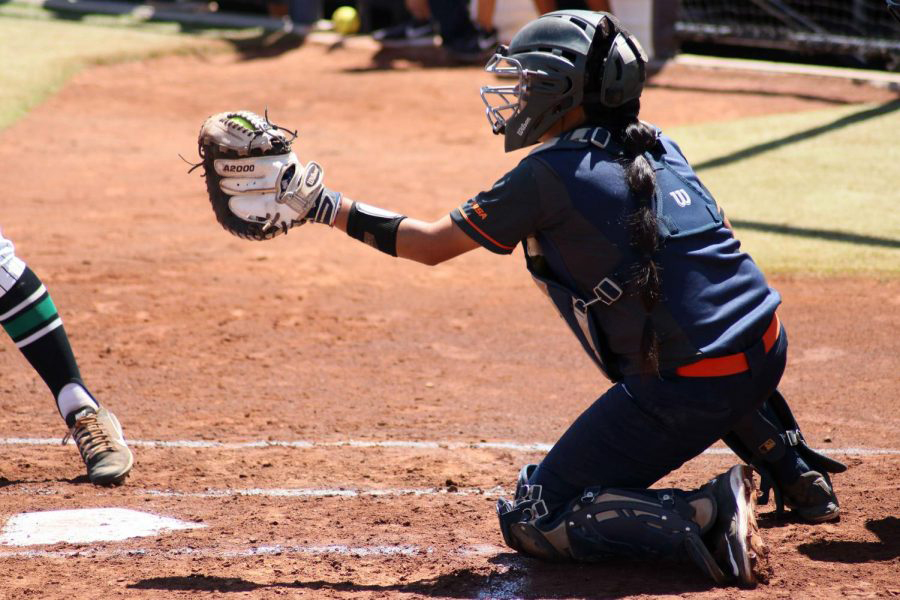 The UTEP Miners started its 2020 softball season losing all five games played in the Troy Cox Classic at Las Cruces, New Mexico. In four of the five matchups the college softball mercy rule ended the games after five innings due to being at least eight points behind in each.

For the weekend, the Miners were grossly outscored 54-11 and the sole bright spot was preseason ALL Conference-USA sophomore third baseman, Kasey Flores, with her two home runs in the five games.

In UTEP’s first game of the season Friday, Feb. 7, the Miners took on the tall task of playing an Arkansas Razorback team that went 38-20, was Southeastern Conference runner-up and went to the NCAA Regionals last season.

Dominated in all areas by the Power Five Razorbacks, the Miners came away shell shocked , losing in five innings 10-0. Mustering only four hits and five baserunners, the Miners were unable to generate any offense. UTEP drew no walks while giving up 12 base on balls. Walks were also a constant issue for the Miners last season, leading the NCAA in walks given up. Ranking 285 in strike to walk ratio kept the pressure on the Miners’ defense throughout last season.

Facing the Nebraska Cornhuskers in Friday’s second game, the Miners once again were hurting themselves with walks and fell behind right from the first  bat with a leadoff home run from Nebraska’s Tristan Edwards.

Through one inning, the Miners were down 4-0. The Miners’ offense came alive with sophomore shortstop Pate Cathey’s bat with a solo home run in the second inning, trailing 5-0 and heading for another possible early stoppage.

Following a Flores home run in the third, senior Mallory Cross doubled in two runs to close the deficit to 5-4. Heading into the sixth inning, the Miners still only trailed by a run, but a four-run inning for the Cornhuskers gave them a five-point lead. The Miners were able to score two more runs in the sixth but were unable to complete the comeback losing 10-7.

Nebraska got on base at will and collected 14 hits while UTEP had 13, while plagued with eight strikeouts. Senior Bryanna Molina reached base all four times at bat going 3-3 with a walk and two RBIs.

Game three Saturday, Feb. 9, started promising with a second home run by Flores tying the score at one apiece after two innings. From that point on it was all Nebraska as they scored 15  points straight for a 16-3 five inning victory.

In the early Sunday tilt, the fourth game for the Miners, the team faced the Bradley Braves and suffered its second shutout of the tournament. UTEP only had two hits and four baserunners total in this game.

In the final game of the tournament, the Miners faced I-10 rival the New Mexico State Aggies and, once again, had a game ended by the five-inning mercy rule as they trailed by eight runs in a 9-1 loss. Two hits, two bases on balls and a player hit by a pitch were the extent of the UTEP offense.

The silver lining, if there is one, is that the Miners reduced its walks significantly each day. The bad news is that UTEP failed to get on base in most of the games played and totaled four hits in its final two games.

Starting off the season with four games ended early due to run differential and only having one game scoring more than three points is not the kind of start first year Head Coach T.J. Hubbard could have hoped for after coming over from Utah State. Hubbard has only been hired as coach for two months, so he has a lot of work to do implementing his system and style on the team.

Former coach Echo Tobin-Hawk’s abrupt dismissal for undisclosed personal reasons so close to the season opening certainly has to have some effect on the team’s development this offseason.

UTEP next plays Santa Clara 10 a.m. Feb.14 in Riverside California at the Highlander Classic, the first of a five-game weekend slate.