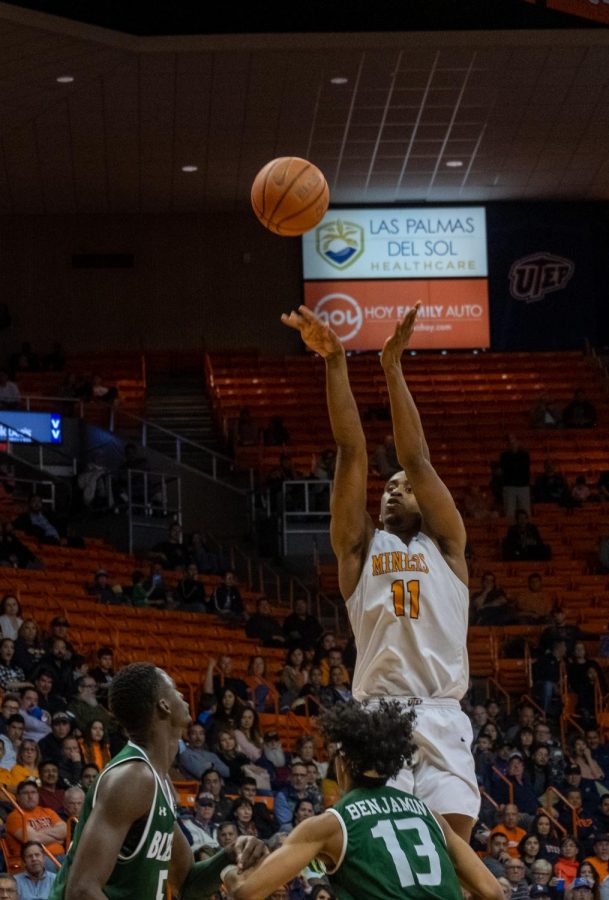 With two games left before bonus play, the Miners will need a lot of help from other teams to make it into the top two group brackets of the 10 best teams in the conference. If relegated to the third group, the Miners could be in danger of not making the tournament as the bottom four teams will play each other in the final bracket of bonus play.

After scoring the first basket of the game, UTEP quickly found itself down by 9 points, after a 9 point run from the Monarchs. Responding with a run of its own, the Miners took a 1 point lead off a 3-pointer by sophomore Efe Odigie with nine minutes remaining in the first half.

Battling back and forth for the next few minutes, ODU would take the lead and never relinquish it with about four minutes left in the first half. A 9-point Monarch run would close the half with ODU leading 34-25. The Miners went scoreless during these final four minutes of the half.

With 12 turnovers the Miners had twice the number of the Monarchs but somehow held a slim 23-22 halftime rebound advantage. Getting to the foul line in the first half was also an advantage for the Monarchs with an eight shot advantage.

Sophomore guard Souley Boum in his second consecutive start was limited to seven minutes and only one shot in the first half while Senior Darryl Edwards led the team at halftime with 8 points off 3-11 shooting. Sophomore Efe Odigie added 7 points in 14 minutes but did not score the rest of the game.

After almost two minutes of a defensive standoff, the Miners closed to within 7 points early in the second half off a layup from Eric Vila. From that point on, the Miners would get no closer than 9 points. A 3 pointer from ODU’s Joe Reece at the 12-minute mark pushed the deficit to double digits.

In the final 11 minutes of the game, the Miners would be outscored 21-12 and end up losing by 19 points.

“We have to take care of the basketball,” Head Coach Rodney Terry said. “We had 12 turnovers at halftime and that was really the difference in the game. We let the half get away from us.”

While shooting a blistering 50% from the field, the Monarchs were able to capitalize on the Miners’ poor 3-point shooting to increase its lead. In a battle of the two worst 3-point shooting teams in the conference, both teams lived up to expectations from that range shooting a combined 28%.

UTEP was dominated on the boards in the second half losing the rebound battle 41-34. ODU had a very balanced attack with five players scoring in double figures. The Monarchs got unexpected scoring outputs from a pair of sophomores Joe Reece with 10 points and a career high 15 points from Kalu Ezikpe.

Leading the Miners were the duo of junior Bryson Williams and Edwards with 16 points total. No other Miner player had more than 7 points. For the season  Boum is averaging more than 12 points a game but only had 4 total points versus ODU.

Sophomore Jordan Lathon making his second start since returning to the team, led the team in rebounds with 11 while only scoring 2 points. Sophomore Nigel Hawkins starting at guard most of the new year did not play at all versus ODU due to sustaining an injury in pre-game warmups.

With one more win than a loss, the Miners are in danger of falling to .500 as it faces one of the best teams in C-USA in its next matchup with the Western Kentucky University (WKU) Hilltoppers (16-8, 9-3).

The Miners play 7 p.m. Feb. 13 versus the second place Hilltoppers at the Don Haskins Center.

Reminder: Students get into all UTEP sporting events free, as covered by tuition cost.