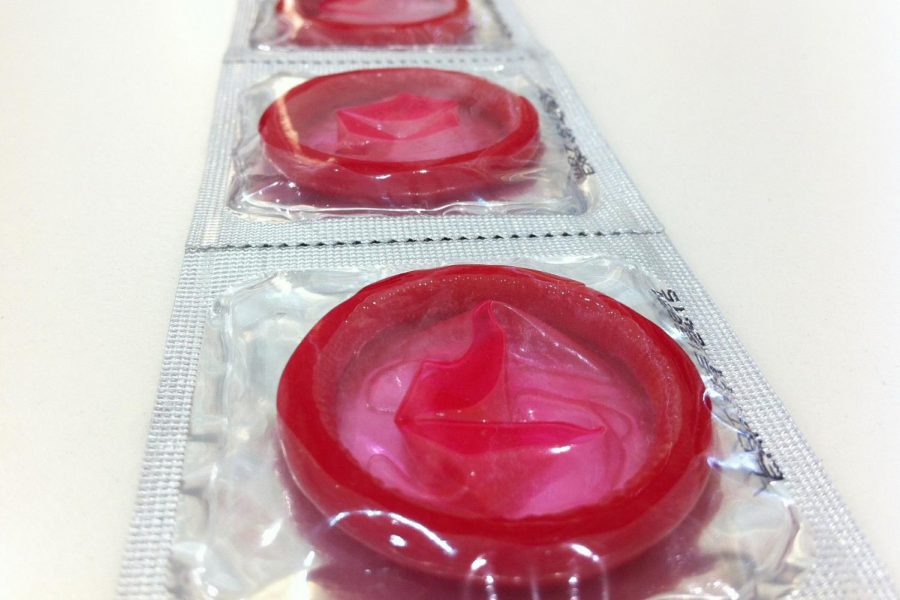 People can now find condom vending machines in bars or in the bathrooms of clubs, but getting condoms still remains as a taboo thing to do, especially among teenagers who start to explore their sexual life.

Any person can walk into a convenience store such as 7-Eleven and buy male condoms for $3 or less. Besides being affordable and accessible, there are multiple options from which to choose. From size, colors, flavors and varying descriptions, such as “pleasure for her,” the options are seemingly endless.

The earliest known illustration of a man using a condom during a sexual intercourse is painted on the wall of a cave in France; it is about 12,000 to 15,000 years old. But the oldest condoms were found in England back in 1640, made of animal guts, according to the archive of  “A History of Birth Control Methods” from Planned Parenthood.

It wasn’t until 1843 when the rubber condoms were mass produced, when Charles Goodyear patented the vulcanization of rubber. By the 1920s, latex was invented, which made the process of creating condoms easier, according to Case Western Reserve University.

People can now find condom vending machines in bars or in the bathrooms of clubs, but getting condoms is still regarded as a taboo thing to do, especially among teenagers who start to explore their sexual life, as seen in various coming-of-age films.

There are many places where condoms are given away free of charge and all kinds and types of organizations that emphasize the use of condoms, not only to prevent unwanted pregnancies, but also to prevent sexually transmitted diseases (STDs).

The cases of syphilis, gonorrhea and chlamydia reached an all-time high in the U.S. in 2018. The latest report from Centers for Disease Control and Prevention (CDC)  published in 2019 reflects the increase. The report shows more than 115,00 syphilis cases, 580,000 gonorrhea cases and more than 1.7 million chlamydia cases.

For about 10 years, UTEP has offered the upper level class Sex, Culture and Evolution, taught by Professor Aurolyn Luykx. The class is divided into two blocks. In the first, students learn about the history of sex and in the second block, a variety of topics such as STDs, birth control methods and pregnancies are explored.

“This semester we are talking about birth control methods and their effectiveness. Of course the male condom is one of the most well-known, but there are plenty more options,” Luykx said.

Women have the option to buy internal condoms, better known as female condoms, which go inside the  vagina.

“Female condoms are less popular than male and also more expensive,” Luykx said. “I think that people don’t hear too much about them. They might think that they are not very effective, but they are.”

On campus, students can pick up free condoms at the Health and Wellness Center. There is also a program from the UTEP wellness center that seeks to educate and promote safer sex. Healthy Miner Sex Positive Peer Education Program  has been in charge of distributing condoms throughout the UTEP campus.

“I believe the university has the resources, they could do more, they can be more active and be more accessible to students,” Luykx said. “For example, we don’t even have feminine products machines in the women’s bathrooms.”

The organization Frontera Folx shares similar ideas. The student organization was born with the goal to promote sex education for youth on campus and around El Paso.

Alexandria Hernandez, a junior majoring in marketing at UTEP, is the president of Frontera Folx. This spring marks the second semester since they created the organization, which has 15 members.

“We know that college life is hard and especially the sex life, but that’s why we want to be a resource for other students like us,” Hernandez said.

The organization offers free condoms around campus. They even have a system coined “condom plugs” in which each Frontera Folx member carries around condoms to distribute among students.

“We call our members condom plugs,” Hernandez said. “If anyone needs a condom or multiple condoms, they can send us a message to our Facebook page and we will set them up.”

The organization invites anyone who is interested in sex education and reproductive rights to attend one of their meetings at 5 p.m. every Wednesday in UTEP’s Old Main Building room 115.

“When you use a condom, you are not only protecting yourself, you are also protecting others,” Hernandez said. “We need to learn to be sexually responsible.”

If students are looking for a birth control method and are not sure which one is right for them, Planned Parenthood offers a free online quiz, which can help them figure out which would be a good option for them before consulting a doctor.

Students also have access to free feminine products at the office of Women and Gender Studies at UTEP’s Liberal Arts Building room 233.

Maria Ramos may be reached at [email protected]