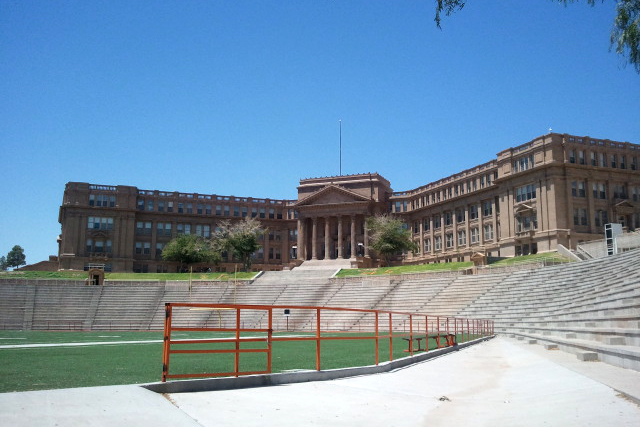 After helicopters and various police units circulated the school’s zone, following a 911 call that stated armed subjects dressed in black were seen wanting to enter the high school, the El Paso Police Department arrested three men, one of them in possession of a BB gun. The El Paso Independent Police District, who have yet to release the men’s identities, reported none of the men entered the school.

The lockdown lasted approximately two hours after the call, with surrounding schools following the same procedure as a form of precaution. Soon after the lockdown was lifted, families began arriving outside of the school upon hearing the news; the school resumed its classes, but gave parents the option of picking up their kids early or at the end of the school day.

“It’s just really humbling to know we work in such a great district where students’ safety is a priority,” said El Paso High School Principal Mark Paz in a Facebook video posted by EPISD.

The video received comments from community members that both praised the school and district for keeping its students safe, but critiqued its reunification process, as parents found it confusing, stressful and insufficient. One user describes having to wait an hour to be reunited with her daughter, as she was misdirected various times around campus due to the school’s lack of communication among themselves, providing an unclear meeting point for families.

“EPISD needs to work out a better plan for dealing with the aftermath of situations like that, and implement it into the drills,” wrote the Facebook member. “There was no coherent process for reconnecting with our kids yesterday; it was stressful and confusing for both the parents and the students.”

While another user shared her experience by writing:

“I was asked my child’s name three times and her ID (number) I even wrote it down and she lets me know no student exists with that name or ID.”

Moments inside the school during lockdown also circulated around social media. One video showed Russell Lang, a social studies teacher, hugging a frightened student, while armed with a yardstick and saying he “would take a bullet” for her and the rest of her classmates.

“I’d take a bullet for you guys,” Lang is heard saying in the video. “You guys have lives to live.”

While the level of the situation became clear for students and teachers as police searched room-by-room inside the school, Lang told KVIA his commitment was in protecting his students.

“I believe that most teachers have a desire to protect and to nurture,” Lang said. “We’ve had situations where we had to go on (lockdown) before and we’ve done lockdown drills before, so I just did my job, which was to ensure the safety of my 30 kids.”

Students, staff and faculty returned to a normal schedule the following day.

“Tomorrow will be another day and we will continue to move on,” Paz said.