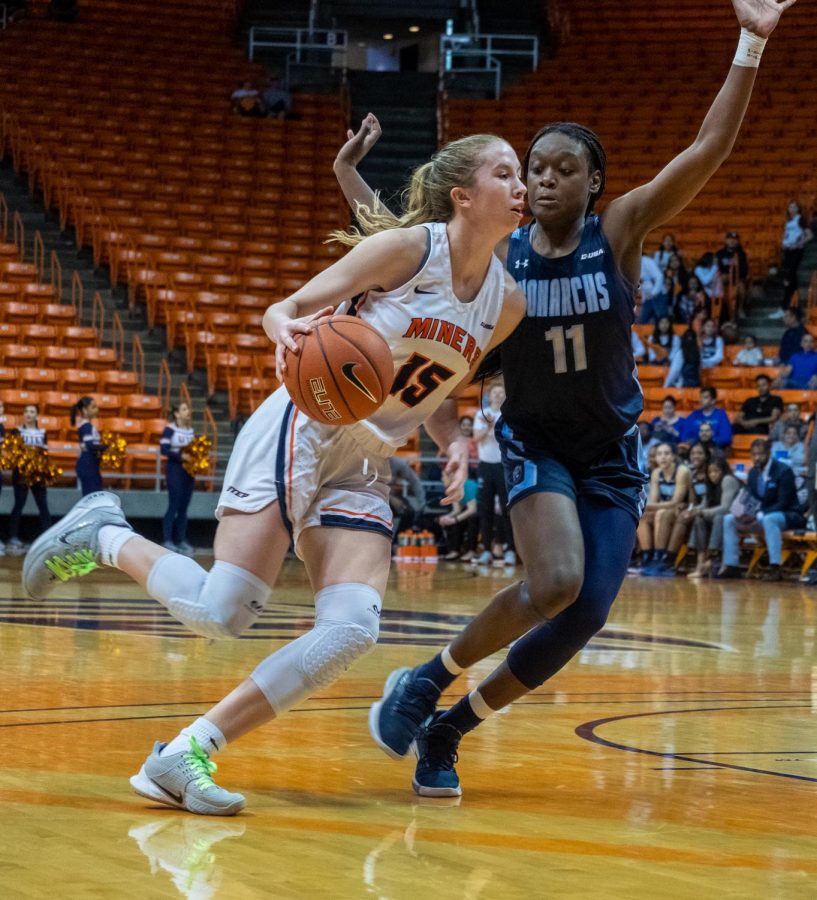 In what looked to be a stellar matchup coming into the Don Haskins Center Saturday afternoon certainly lived up to the hype but the Miners (13-9, 6-4) came up just short of breaking Old Dominion’s (ODU) (20-3, 10-1) now eight-game winning streak falling 77-69. The Miners split its two-game homestand after defeating Charlotte 82-76 in overtime Thursday.

“I thought we played really well today and I’m really proud of our team and I’m really glad that we put ourselves in position to win the game,” Head Coach Kevin Baker said.

UTEP senior guard Katarina Zec came out of the gates swinging scoring 16 points in the first quarter which is the second most in a quarter by a Miner in program history, and both the Miners and ODU showcased a fast-paced style of game throughout the game.

The game was deadlocked at 40 at halftime and the Miners shot 45% from the field while Zec scored 20 points.

After three quarters ODU led by a point (55-54) and the Miners took the lead off of four straight points by Gallegos and led by three with 7:55 remaining. ODU took the lead off of back-to-back shots from downtown by junior guard Victoria Morris. Morris knocked down seven threes tailing 23 points for the Monarchs.  UTEP found themselves with less than three minutes remaining and could not muster within six as ODU closed the lid for the matchup.

Zec was held to two points in the first half as ODU’s stifling defense was evident. ODU came into the game with the top scoring defense in Conference-USA.

“They face guarded me so we’re trying to put the ball inside more instead of focusing on perimeter shooting,” Zec said.

The Miners have put up good fights against the top two teams in Conference-USA in Rice and ODU losing by a combined 16 points between the two teams. Having a team that features two freshmen in the starting lineup and two more in the rotation the experience of nearly defeating tough conference powerhouses will only be beneficial to them moving forward.

“Almost exactly the same situation we were in against Rice and we put ourselves in a position to win that day and the same here,” Baker said. “I do think that championship level teams they look at that moment and they just become special.”

“We got some young kids out there that are still learning and once they get it figured out, they’re going to be pretty good, “Baker said.

UTEP’s next task is a three-game road trip that begins with a against Western Kentucky University, then the Miners take on Marshall and conclude the road trip against the University of Texas at San Antonio.