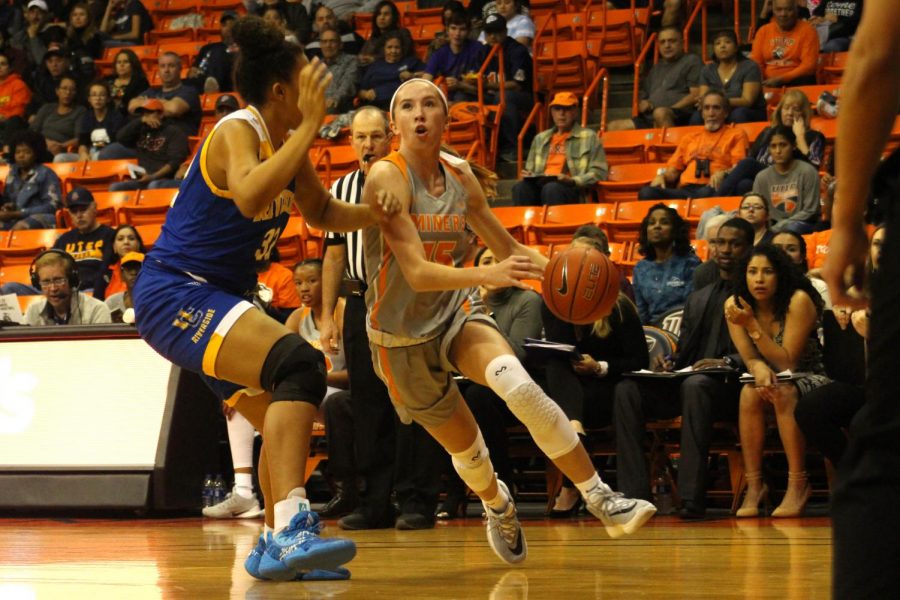 Avery Crouse, freshman playing against Riverside at the Don Haskins Center on Nov. 9, 2019.

Facing two of the top five teams in Conference-USA (C-USA) was a tough task for the UTEP women’s basketball team this past weekend.

The Miners failed to muster a comeback win against Middle Tennessee State University (MTSU) and a rough shooting outing doomed the squad against the University of Alabama at Birmingham (UAB) Blazers.

Now the Miners look to rebound during a two-game homestand against Charlotte and second-place Old Dominion. After the road trip, the Miners are tied for sixth place in conference.

After falling 31-10 against MTSU, the Miners battled to get within seven points (65-58) in the fourth quarter but couldn’t rally in the final stretch to pull off the win. Senior forward Ariona Gill put up a solid double-double performance, posting 20 points and 12 rebounds.

“We were playing our ‘B-level game’ instead of an ‘A-level game,” Head Coach Kevin Baker said. “There’s a lot of reasons for me to be frustrated right now because we didn’t play well, but more reasons for us to be excited with the kind of character we have shown.”

Three players posted double-digit scoring performances for UTEP in the Miners’ second game of its road trip against UAB, but the Blazers lived up to its alias as a great three-point shooting team, going 45% from downtown. The Miners were cold from the field, shooting 29% and 20% from the three. Over its last two games, the Miners averaged shooting 33% from the field.

“We held them to 63points, but as luck would have it, in the first half, we couldn’t throw it in the ocean. That’s how it’s been for our team lately,” Baker said.

The first matchup in the Miners’ two game homestand features the team it is tied for sixth place  in C-USA with the Charlotte 49ers.

The 49ers are on a three-game winning streak and have one of the best defenses in Conference-USA, allowing a third-best 60 points per game.

Charlotte is led by redshirt senior guard Jade Phillips’ 15 points per game, which is eighth best in Conference-USA. The 49ers also have two more reliable playmakers in junior guards Mariah Linney and Christian Hithe, with both players averaging nine points per game.

Last season the Miners fell to the 49ers by 23 points in Charlotte where UTEP had only six active players due to injuries.

UTEP finishes off its homestand against second-place Old Dominion, a team that is on a seven-game winning streak and is talented on defense. Old Dominion can provide pressure on its opponent throughout the game.

For the Miners, the hot hand on the offensive end is Gill, who has posted back-to-back double-digit scoring performances and has averaged 12 points per game in her last five games.

The Miners kick off its two-game homestand at 7 p.m. Feb. 6  against Charlotte and finish off at 1 p.m. Feb. 8 at the Don Haskins Center.