Seeking peace in the Middle East and beyond: El Pasoans rally against all aspects of war 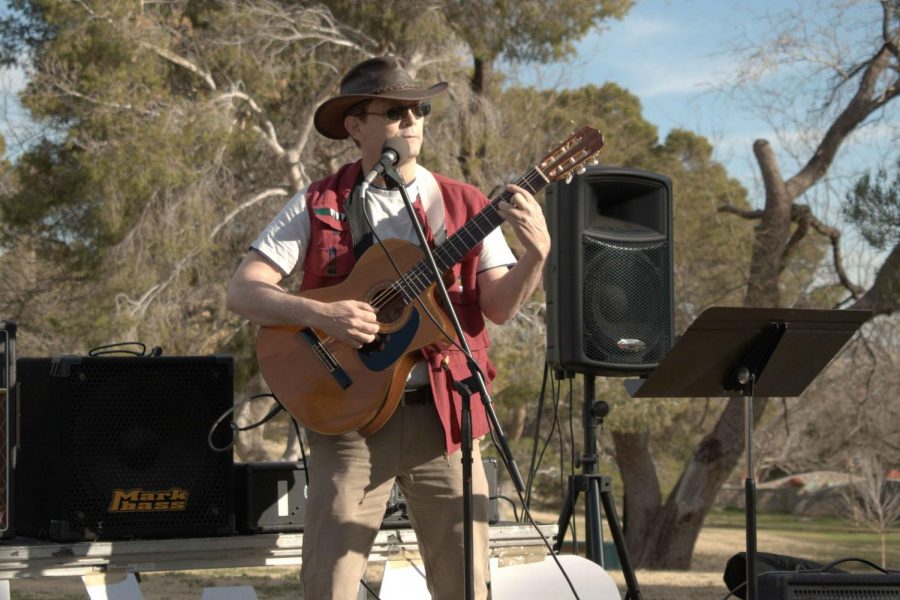 An anti-war rally was held Jan. 25 at the Northwest corner of Memorial Park thanks to the combined efforts of local organizations like Sunrise El Paso, El Chuco Democratic Socialists of America (DSA) and Border Peace Presence.

The event coincided with an International Day of Action in which anti-war groups worldwide assembled in protest of the recent spike in tension between the United States and Iran. A mid-sized crowd of people gathered together, handmade picket signs in tow, to hear a series of speakers discuss relevant topics, with intermittent live music performances from Dr. Pedro Blandon  and local band Diaspora. People of all ages attended the event, which attests to the fact that the issue of war spans across generations.

“I haven’t been alive at a time where this country was not at war,” said Graciela Blandon, 18-year-old Sunrise El Paso member. “So, the need for a broad-based, sustainable anti-war movement was really clear to us, and this event is a kickoff for that.”

Following the U.S. drone strike near the Baghdad International Airport Jan. 3, which resulted in the assassination of Iranian major general Qassem Soleimani, the general public has felt a growing concern about the possibility of yet another military conflict. This series of events may seem all too familiar for many Americans, as the U.S. military involvement in the Middle East has persisted for nearly two decades now.

“I find it very depressing that war in Iraq started in 2003, yet here we are — it’s 2020,” said Merlyn Heyman of Border Peace Presence. “I mean, when are we ever going to learn, right? After the horrors of World War II, people said never again, yet here we are. It’s happened over and over again.”

Joe Heyman, also of Border Peace Presence, explained that the biggest combatant against the forever wars goes beyond voting in the next election.

“2020 is the year to vote, but there are a lot more things we need to do beyond voting,” Heyman said. “We need to educate ourselves and we need to be out here at events like this.”

The rally was not limited to discussion solely about the war in the Middle East, however.

It also hosted a number of speakers from different local advocacy groups, each facing a war in their own unique form.

Lorena Andrade of La Mujer Obrera spoke about feminism and Violence in Latin America, Adrian P. Ordoñez-Jasso of Sunrise El Paso spoke about the corporate greed behind war and how it accelerates climate change and Marlo Holguin gave a passionate speech about the war on drugs and the devastating impact that the punitive justice system has brought upon communities of color.

“These organizations have found that their issues are incredibly intersectional, along with the anti-war movement,” Blandon said. “When we say we’re anti-war, we’re talking about the war against women; the war against drugs; the war against immigrants … When we condemn violence, we’re condemning all violence.”