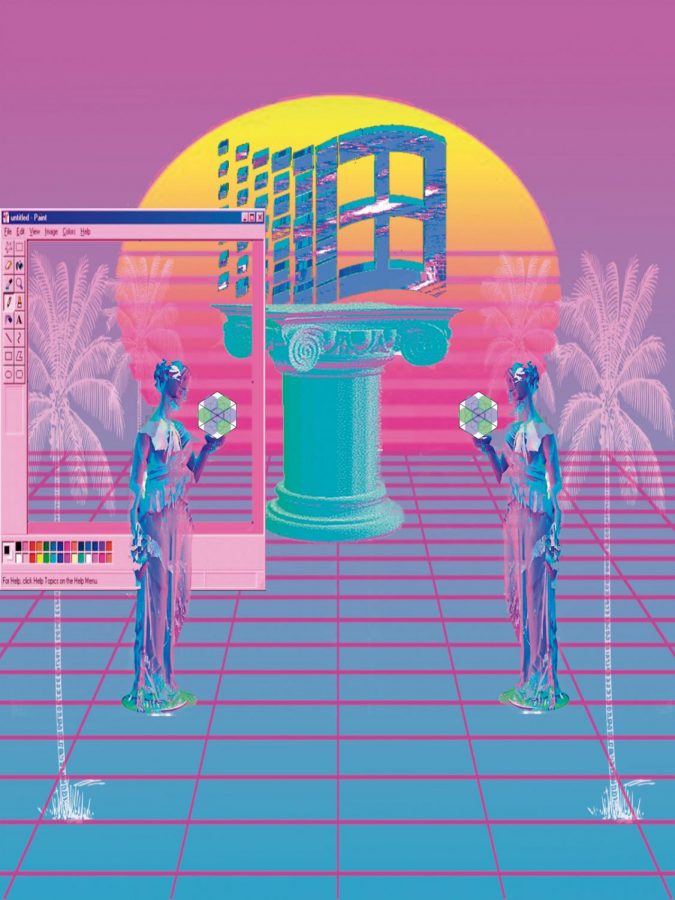 Vaporwave is an Internet-based microgenre that was built upon the experimental and ironic tendencies of genres such as chillwave and hypnagogic pop.

Vaporwave is an internet-based microgenre that is characterized by distinct low-fidelity, or lo-fi, beats skillfully paired with heavy sampling of existing media to produce music that sounds refurbished, post-modernized, retro and futuristic – all at the same time.

Dummy Mag defines the genre as “wholly synthesised or heavily processed chunk of corporate mood music, bright and earnest or slow and sultry, often beautiful, either looped out of sync and beyond the point of functionality or standing alone, and sometimes with a smattering of miasma about it.”

Producing vaporwave music is entirely based on being resourceful because it is mixing and mashing songs from different generations, like the ‘80s and ‘90s, to create a sound that’s brilliantly paradoxical – both retro and futuristic.

“The whole appeal of vaporwave is its use of remaining unknown, that in a world where nothing is private, it is refreshing to find something that feels like it was found in the dumpster of a thrift shop where it does not matter who it came from or who made it only that it takes you elsewhere, somewhere distant from reality,” vaporwave artist Eco Virtual told music writer Ben Heels in an article titled “History of Vaporwave.”

This notion of “remaining unknown” is driven even deeper due to vaporwave artists using pseudonyms like “Blank Banshee” and “Macintosh Plus” to remain anonymous while professionally putting out their work, adding a degree of amorphousness that reinforces the enigmatic quality of the genre.

Chuck Person’s 2010 album “Eccojams Vol. 1” is thought to be one of the earliest vaporwave albums and is essentially a compilation of sampled ‘80s tracks with a breath of new life yet still leaving intact the tinge of familiarity that evokes nostalgia.

Following Person’s pioneering lead was James Ferraro who drew inspiration from the concept of 21st century consumerism to create the album “Far Side Ritual,” released in 2011.

Then came the release of the successful vaporwave album “Floral Shoppe” in late 2011 by Macintosh Plus, which currently has more than a million views on YouTube.

With such momentum, the album made the microgenre more approachable to new audiences with its most recognizable track “Lisa Frank 420,” a slowed down rework of Diana Ross’ “It’s Your Move,” which went viral, racking up over nine million views on YouTube.

Vaporwave has an extremely distinguishable aesthetic characterized by its use of vintage computer imagery and its satirical appropriation of old media and the romanticizing of ’80s and ’90s consumerist culture. Common consumer imagery reflective of the time and desired design include Arizona Iced Tea, Fiji Water and video game cover arts, an example being Person’s “Eccojams Vol. 1” album cover featuring box art from the Sega Mega Drive game “Ecco the Dolphin.”

The videos are recognizable by their production and editing, vintage VHS video quality, superimposed static lines with the music synced over a despondent backdrop. Greek imagery such as the use of Greco-Roman statues, busts and pillars are wildly prevalent, one of the most notable uses of them being their depiction on the cover of Macintosh Plus’ “Floral Shoppe.” Some have speculated and attributed the use of the architecture to be a nod to the garishness of the interior design of the ’80s and ’90s.

Vaporwave also experienced somewhat of a cyber revival in the form of memes and parodies, succumbing to the irony-driven attitudes saturating the internet.

The spaced out, all caps typography is also another example of yet another staple of this microgenre. The video went viral, giving prominence to what would later be known as Simpsonswave. By marrying popular culture and the vaporwave aesthetic, Simpsonswave magnetized a whole new dimension of the genre, coalescing old nostalgia with the new.

“Listening to vaporwave reminds me of going to Taco Bell as a kid and seeing its interior design of the ’90s,” said vaporwave enthusiast Jesus Hernandez. “It reminds me of re-watching your favorite VHS for like the hundredth time and noticing how the image quality gets worn down, but you keep re-watching it. It makes you want to go back.”

With its overtones of nostalgia, vaporwave has lent itself to be established and remembered as a microgenre that uses the past to give to the future.