Alabama Birmingham blazes by the Miners

The UTEP Miners (13-10, 4-6) lost its second home game of the season to the University of Alabama at Birmingham (UAB) Blazers (14-9, 5-5) after being outscored by 14 points in the second half. At halftime, the score was tied at 27 points apiece, but a 14 point run by the Blazers during a four-minute stretch of the second half put UAB in control of the game the rest of the way.

Both teams came into the matchup with identical records of 13-9 and tied for eighth with  4-5 conference records. UAB won its second straight game and third straight road game on the season.

About three minutes into the second half, the Blazers took charge after shutting down the Miners scoring for four minutes and taking a 13 point lead. With about eight minutes left in the game, the Miners were trailing by 16 points.

UTEP cut the lead in half with about six minutes left in the game off a 3-pointer by sophomore Souley Boum. Unfortunately, over the next three minutes of the half, the Blazers went on an 8 point run to shut the door on the Miners to push the lead back to 16 points. Junior Eric Villa’s 3-pointer with 27 seconds left would make the final margin of loss of 14 points.

In the second half, UAB shot a blazing 60% from the field and for the game dominated in the paint outscoring the Miners 36-16, including 20 points off turnovers. The Blazer ball movement continually set up easy baskets inside to which the UTEP defense had no answer.

Four UAB players scored in double digits led by senior forward Will Butler with 17 points. Butler over the past two games has been on a tear with 35 points combined while shooting 69 % from the field. Freshman guard Jalen Benjamin continued with his impressive first season putting up 15 points on 4-8 shooting, including 2-5 from the 3-point line.

Leading the way once again for the Miners was junior Bryson Williams with 26 points and eight rebounds. 14 times this season, Williams has led the team in scoring and he is currently second in Conference-USA scoring with 19 points a game as well as fifth in rebounding with seven a game.

Boum was the only other  Miner in double digits with 10 points in the game on 4-6 shooting. Fellow sophomore point guards Nigel Hawkins and Jordan Lathon were held scoreless in 40 minutes of combined play. Hawkins did not attempt a field goal and Lathon was 0-2 from the field.

Before entering the transfer portal, Lathon was the starting point guard and was averaging 6 points a game. Coming off the bench, Lathon is 0-17 from the field and has six points in those eight games, all from free throws. Playing time for Lathon has fallen from 27 minutes a game to 15.

Sophomore forward Efe Odigie coming off a double-double performance, the game prior played 17 minutes and made his presence known with 6 points, five rebounds and three steals.

We did not play with the kind of urgency or defense that you need to have this time of year in conference play,” Head Coach Rodney Terry said. “We have not had consistent guard play from game to game; those guys have to play better.”

“Those guys out willed us and were more physical in the paint. Players got to play, they have to compete and we did not compete for whatever reason tonight and that is the disappointing and embarrassing part of it,” Terry said. 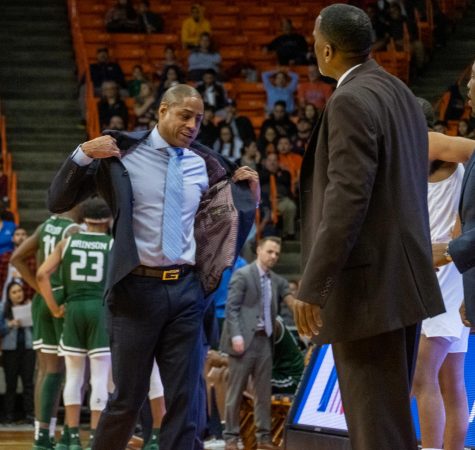