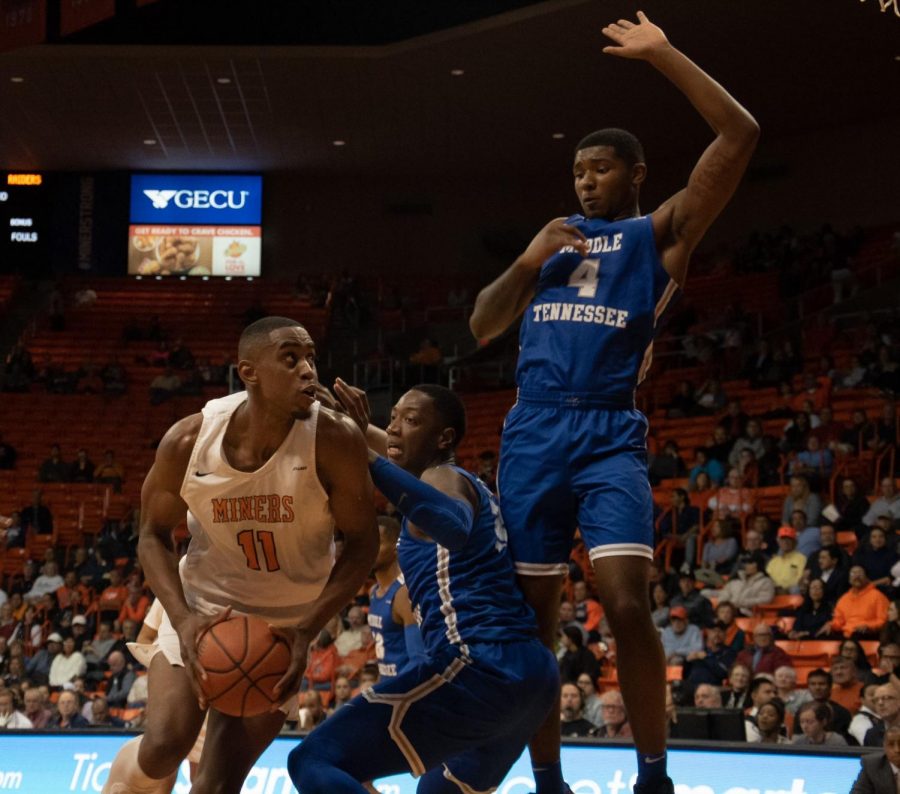 The UTEP Miners were able to hold off and secure a home win defeating the Middle Tennessee State University (MTSU)  Blue Raiders 67-66 Thursday at the Don Haskins Center.

MTSU came out swinging early in this contest, scoring inside the paint and were successful getting to the foul line. The Miners eventually answered back to get on the scoreboard with a dunk from freshman guard Deon Stroud. MTSU began heating up from the 3-point range as well as midrange jump-shots to take an early double-digit lead. UTEP was down by as much as 13 in the first half, but a 15 point run helped bring the Miners roaring back to tie the game at 22 apiece.

At the half, the Miners were dead even with Middle Tenssese State at 34. Junior forward Bryson Willams led the first half in scoring with 19 points with five rebounds.

In the second half, sophomore forward, Efie Odigie broke the tie giving the Miners a two-point lead to start the half.  MTSU took the lead momentarily, but the Miners regained the advantage as Stroud got a score and foul to pull ahead by one.

Sophomore guard, Souley Boum, made his presence felt by draining a shot as he was fouled and hit the subsequent free throw after being quiet most of the night. Late in the second half, the Miners started to pull away with a  jump hook from Williams, causing the Blue Raiders to call a timeout as UTEP led by four at 65-61. MTSU, in the final seconds, sank a late 3-pointer to pull the game within three of the Miners at 67-64.

The Miners were able to hold off the late surge, claiming victory 67-66. Leading the way for the Miners was Williams with 28 points and 10 rebounds. After not playing the previous two games due to oversleeping and missing the team bus sophomore Efie Odigie came through with a double-double scoring performance notching 15 points and pulling down 10 rebounds.

“We knew they could really shoot the basketball,” Head Coach Rodney Terry said. They are a much better team than their record shows; we knew it was it all going to be about our defense. We were able to play to our strength, getting easy opportunities in transition. I am again happy with the win and  thought we could close it out a little better.”