‘The Gentlemen’ a quick-witted, action-packed success of a crime thriller despite a few culturally insensitive jokes 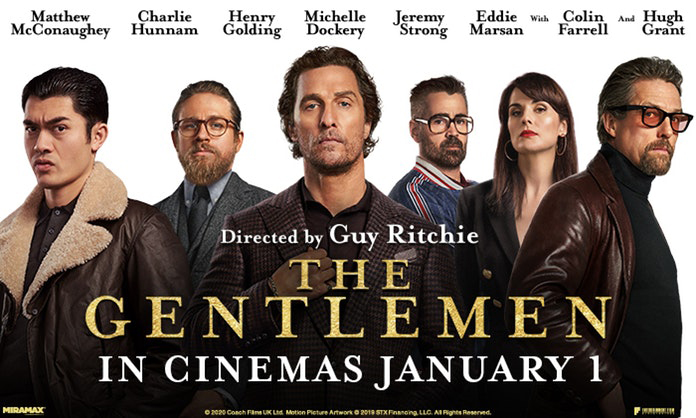 The Gentlemen is a 2019 action crime comedy film written and directed by Guy Ritchie, from a story by Ivan Atkinson, Marn Davies, and Ritchie.

British filmmaker Guy Ritchie’s latest film, “The Gentlemen,” is an excellent action-comedy crime thriller with as many twists and turns as a rollercoaster to hell and back that depicts a violent battle of wits between sophisticated British mobsters over the lucrative, yet bloody marijuana black market in Ritchie’s fictional United Kingdom.

Ritchie is known for directing successful comedic crime films like his 1998 “Lock, Stock and Two Smoking Barrels” and his 2000 “Snatch” that capture this rugged working-class Londoner aesthetic–sometimes known as cockney. The Gentlemen is a continuation of this prosperous streak of action-packed, quick-witted crime films, a streak that the director deviated from to produce “Aladdin” for his five children, among other reasons.

Breathing life into this intricately clever screenplay is a star-studded cast featuring Matthew McConaughey as the cunning protagonist, Mickey Pearson. McConaughey’s character is a rags-to-riches tough guy that’s not only street smart, but also book smart since he went from an unstable home in Tennessee to becoming a Rhodes Scholar at the prestigious University of Oxford, selling weed to the university’s rich upper-class student body.

Aside from his superb acting, McConaughey’s snazzy outfits and his luxuriant curls are two details that amusingly bring this archetypal mobster character to life.

However, the same can be said about the entire cast when it comes to wardrobe. From stylish leather jackets and turtlenecks to exuberant tracksuits, a major cornerstone of this film is quite simply its wardrobe. McConaughey, however, took it a step further with his dapper-style wavy, curly hair.

The film begins with a scene of Pearson enjoying a tall glass of English Lore beer accompanied with a pickled egg in what seems to be a British pub. This scene is very Ritchie-esque considering Ritchie himself enjoys beer and even owns his own pub in London with footballer David Beckham that has English Lore on tap.

What seems to be a relaxing and elegant scene quickly turns bloody and the majority of the film tells the story of all the events leading up to this one particular scene, that actually ends up taking an unexpected twist in the end.

Enter “Sons of Anarchy” actor Charlie Hunnam as Pearson’s reliable sidekick, Raymond, and the iconic Hugh Grant as the whimsical private investigator and hopeful screenwriter, Fletcher, who gives the film its moments of lighthearted comedy.

Fletcher somehow snuck into Raymond’s cozy upscale home to negotiate a £20 million deal to sell a screenplay he wrote in exchange for this large sum of money from Raymond.

Fletcher is literally blackmailing Raymond with the actual screenplay because it’s not just any piece of writing. The screenplay is an actual account of all the notes Fletcher took as an investigator for the opportunistic British tabloid, The Daily Print, of all the messy dark deeds committed by Raymond and Pearson in the midst of a mobster business deal gone wrong.

The film’s plot unfolds as Fletcher explains the content of his screenplay, which again, are events that actually happened and is just Fletcher basically touting his investigation to Raymond in the form of proposing a screenplay.

One thing that must be discussed is Fletcher’s sexuality and how it’s hilariously expressed in his dialogue with Raymond.

In one scene, Raymond says it’s time for him to go to bed, to which Fletcher responds, “Can I come?” which obviously implies that he’s either gay or bisexual, but in a very witty way.

It’s a very simple comedic element and Ritchie did well in strategically placing jokes throughout the entire film — at least most of them.

On the topic of humor, some jokes simply fell flat, like a joke about the appropriateness of saying the term “black cunt.”

The Hollywood Reporter criticized this “non-woke” humor in its review of the movie, asserting, “The film’s undercurrent of knowingly non-woke humor is also slightly grating: weak jokes about Chinese people having comically rude names and mixing up English vowels, for example, or a digression on whether it is racist to call somebody a ‘black c—.’ These nagging details feel more lazy than willfully offensive, but they are still oddly out of place in a film set in multicultural 21st century London.”

Jokes having to do with race are always hard to gracefully pull off without raising an eyebrow.

Ritchie might have missed the bullseye in that regard, but Fletcher definitely kept the comedic spirit alive throughout the movie.

Other big names in the movie include “Downtown Abbey” actress, Michelle Dockery, playing Pearson’s partner-in-crime/wife, Rosalind Pearson; “Succession” actor, Jeremy Strong, as the film’s conniving backstabbing antagonist, Matthew Berger; Colin Farrell as the film’s track-suited father figure, Coach; and host of BBC’s “The Travel Show,” Henry Golding, as the other brutal antagonist, Dry Eye, who “explodes onto the scene like a firecracker,” according to Fletcher.

The business mobster deal that goes wrong in this film is between Pearson and Berger and it has to do with weed —  a lot of it.

Pearson plans to retire a bit early after a successful career running a marijuana agribusiness and distributing its products to the British masses of pot smokers with the help of rich buddies he made in college, namely the Pressfield family.

Pearson drives Berger to a run-down shed in a rural area that has a secret entrance to one of his state-of-the-art weed operations, but Berger doesn’t take the offer upfront.

Enter Dry Eye, a ruthless Chinese-British drug lord who boldly approaches Pearson in an attempt to buy his business.

There is obvious bad blood between these two characters with Pearson declining Dry Eyes’ offer, of course, after a jaw-dropping action scene which is another twist in this rollercoaster of a film.

Things start to go wrong after a group of young amateur boxers break into one of Pearson’s underground marijuana crops to steal several plants and film everything for a rap video that’s eventually uploaded to the internet. Yup, there’s even a musical worked into this film.

However, despite the catchy rap lyrics, this video spelled out bad publicity for Pearson’s business since growing marijuana is still illegal in the U.K., but the break-in did not happen out of pure chance.

In the midst of this growing uncertainty for Pearson and the future of his cannabis business, the Pressfields ask Pearson for help in retrieving their runaway daughter, Laura.

Raymond takes on that job and tracks down Laura living in a sketchy apartment with other junkies, where she agrees to return to her wealthy family but ends up dying of a heroin overdose shortly after. However, in trying to retrieve the woman, one of Raymond’s associates accidentally pushes one of Laura’s Russian buddies out of the high-rise apartment building, falling to this death.

After all the punches have been thrown and all the bullets have been shot, someone gets the last laugh while someone else bites the dust because in the comical and clever words of Fletcher, “there are those who are heroes and those who are zeroes.”