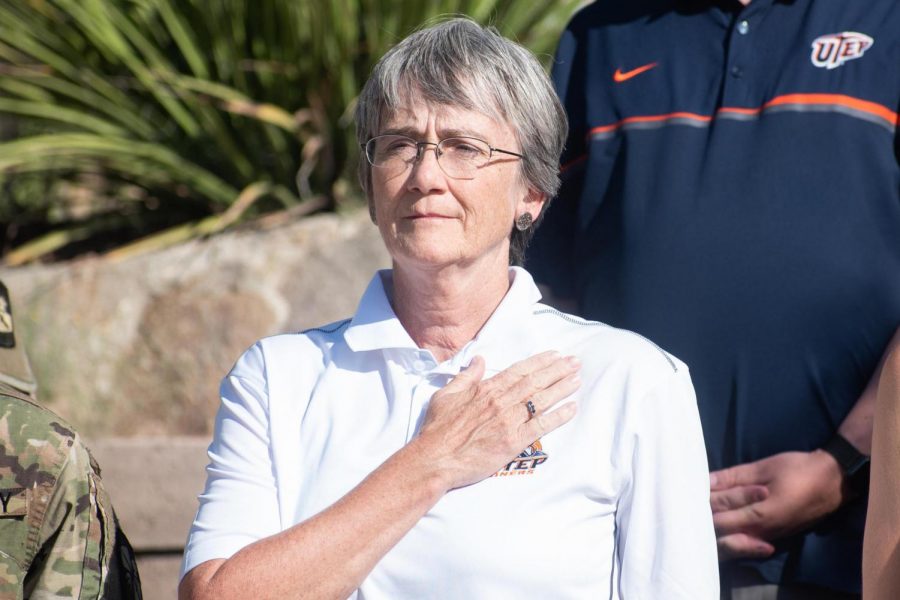 Since leaving her role as Secretary of the U.S. Air Force, Heather Wilson became the newest president of UTEP.

The Colorado Independent reported on a leaked list of mostly Republican candidates who were under consideration to lead the University of Colorado (CU) System as its president, which listed UTEP President Heather Wilson among the 30 candidates — a search conducted around the same time the University of Texas (UT) System conducted its own search to fill UTEP’s presidency.

The Prospector inquired on Wilson’s decision to lead UTEP instead of CU, to which she provided the following statement:

“Current and former University Presidents are contacted very frequently by headhunters to see if they are interested in particular positions or are asked to recommend others who might be. I knew I wanted to return to public higher education in the West when I finished my service with the Air Force, and Colorado met that criteria. However, the Chancellorship in Colorado is not on a campus. One of the things I enjoy most about higher education is engagement with students and UTEP was a much better fit for what I love and wanted to do. I’m very happy to be here.”

Wilson did not specify roughly how many high-ranking university jobs she was under consideration for before she landed UTEP’s top job.

The short list anonymously leaked to The Colorado Independent indicates that only 11 candidates among the 30 were recommended for interviews, most of whom are conservative like Wilson, resulting in the selection of former Congressman Mark Kennedy as CU’s new president.

CU’s selection of Kennedy was shrouded in controversy and met with protests because “the secrecy around his hiring by a Republican-controlled board that promised applicants confidentiality led to concern among critics that partisan politics, not just merit, determined the outcome,” according to The Colorado Independent.

This same concern over a secretive process that results in the selection of someone with a history of conservative politics was expressed by critics on a local and statewide level when Wilson was selected to succeed UTEP’s previous president, Diana Natalicio, even by UTEP faculty.

Guillermina Gina Núñez-Mchiri, UTEP faculty senate vice president, told Inside Higher Ed that the faculty senate “was never consulted during the search — nor was it told who the semifinalists were” and that “faculty members on the UT search committee, she said, were required to sign a nondisclosure agreement prohibiting them from talking about the process.”

However, the report also acknowledges that “presidential searches are often secretive” and according to a study in the Journal of Higher Education, university presidencies are also often political appointments.

“A troubling aspect of most public boards is that people come to the work with a particular ideology based on their political party,” an interviewee said in the academic article. “Yet the work of the board needs to be carried out in a nonpartisan way.”

“To be effective, however, public higher education boards must confront the natural tendency to adopt a political culture,” Another interviewee said.

The structure of public higher education boards varies by state. In Colorado, the CU regents are elected by voters in partisan elections, while in Texas, the UT regents are selected by the governor. But both governing boards used seemingly partisan and secretive processes to appoint high-ranking administrators.

Unlike the process conducted by CU’s governing board that narrowed a pool of 160 applicants down to 30, the UT Board of Regents named Wilson as the sole finalist for UTEP’s presidency.

Any other candidates who might have been in the running for UTEP’s presidency remain a mystery — a mystery  enforced by nondisclosure agreements.