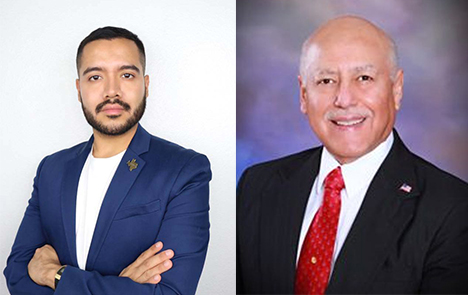 According to the Texas Comptroller of Public Accounts, the responsibilities of the county tax assessor-collector include assessing and collecting property taxes, the registration, titling and transfer of all vehicles, the issuance of disabled parking permits, the collection of sales tax on automobiles and collecting fees and distributing beer and liquor permits on behalf of the Texas Alcohol and Beverage Commission.

However, both candidates expressed that the office is mostly preoccupied with automobile registration over anything else.

Gonzalez is running for reelection after being elected in May 2016 in his own right. He was initially appointed to the post by the county commissioners court months before that.

In an interview with The Prospector in his county office that was coordinated by his administrative assistant, Gonzalez highlighted his more than 38 years of experience working for the state in several different capacities      .

“I’ve been focused on customer service since I’ve been here and that’s an important thing that the citizens of this county deserve,” Gonzales said. “I am a responsible person and I’ve proven it. I have proven leadership, proven experience and I bring proven results to the field in this position. I have a lot of support. I’ve been endorsed by César Blanco. I’ve been endorsed by the veteran community. So, there’s a lot of people that believe in me.”

While the incumbent touts his vast experience as a government employee, Gonzalez also acknowledges that he is “not a politician” and that he is not much of a campaigner either.

“I don’t do this all the time,” Gonzalez said. “I’m here for the service.”

The incumbent also boasted about his ability to manage the financial resources of the office.

“I’ve accounted for every single penny that belongs to the county … We contribute over $150 million to the state. We’ve collected over $21 million for the county in registration and total fees,” Gonzalez said. “I have passion for this work because I know what to do. My opponent does not have the experience and the caliber of expertise that I bring to the table.”

This past November, 28-year-old Niño announced his bid for the position as a Democrat. He previously worked with the county tax assessor-collector’s office as a deputy through a contracted title registration firm.

The candidate said he brings new ideas to the table and experience serving on advisory boards for the Texas Department of Motor Vehicles Title and Registration and the City of El Paso Museums and Cultural Affairs Department, among other advisory groups.

Niño sees a need for the county tax assessor-collector’s office to not just “complete duties at the office,” but to also “better the community.”

“I know Congresswoman Veronica Escobar co-sponsored a bill, I don’t remember the exact number, but it’s an automatic voter registration initiative that automatically registers you to vote,” Niño said. “I think that is a great idea and I would love to work with the Congresswoman

to make sure that this is something that could become national.”

The bill seeks to ensure every person that provides “identifying information to the State motor vehicle authority is automatically registered to vote.”

However, the bill remains pending in the House Administration Committee and has not received any action in over a year.

Niño repeatedly said that it is simply not enough to just get the job done, but to ensure that “we’re truly representing our constituents.”

The candidate plans to eventually release videos through his campaign to illustrate his ideas and plans to “empower the community.”

The last day to register to vote in the March 2020 primary election is Feb. 3. For a complete list of important dates, visit the county’s election office website.