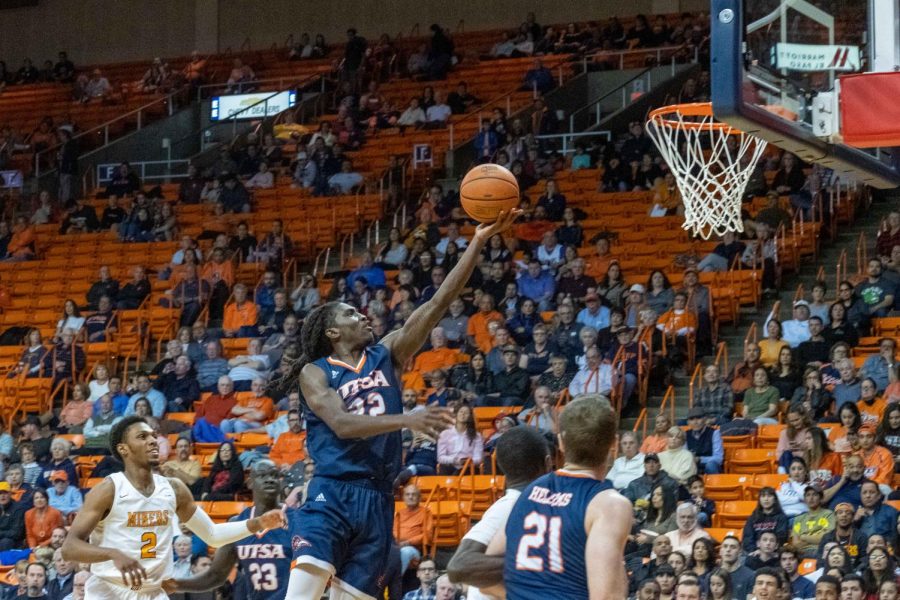 UTSA's Keaton Wallace drives to the basket versus the UTEP Miners Jan. 15.

The University of Texas at San Antonio (UTSA) got payback against the UTEP Miners Saturday with a dominating 86-70 victory on its home court. Leading from start to finish in this matchup, the Roadrunners shot 61 percent in the first half to build a 17-point halftime lead. Early in the second half, UTSA built up the lead to 23 points, much as it did in the previous matchup in El Paso.

After securing a 24-point comeback in the last matchup, the Miners chipped away at the UTSA lead at about the 12 minutes mark. This game was at a similar point that UTEP staged its biggest comeback in history a few nights earlier versus the same team. With the lead cut to six points at the seven-minute mark, the Miners were regaining the swagger from its overtime victory over UTSA. Junior Luka Barasic of UTSA then proceeded to throw cold water on the UTEP comeback with a layup and one to extend the lead to nine points.

Nine points would be the closest that the Miners would get for the rest of the game and UTSA extended the lead into double digits at the 4:30 mark and never looked back. With about 2 minutes left, the Roadrunners led by 15 and the game was never in reach.

Losing its eighth road game of the season and Head Coach Rodney Terry’s 21st straight as a Miner coach, UTEP fell to 11-8 on the season and 2-4 in the conference with the loss. Currently residing in 11th place in Conference USA, the Miners are a far cry from where they were predicted to be in the preseason.

“We let them go early in transition. We can’t let a team like that get transition baskets like that to start the game, “Terry said. “We didn’t have the urgency to get back and get stops when we needed them on defense.”

UTSA’s one-two punch of Jhivvan Jackson and Keaton Wallace combined for 44 points doing most of the damage as they had in the previous matchup. Senior Otem Bior putting up a career-high 13 points was the surprise of the night. After being held scoreless just three nights prior, Bior, who averages about 4 points a game, put up 11 in the first half and missed only two shots out of eight for the game.

Junior Bryson Williams led the way for the Miners as usual with 21 points and seven rebounds. Unfortunately for Williams, he fouled out at the two-minute mark putting on a game effort. Williams has done a much better job recently in staying out of foul trouble and has played well when in danger of fouling out, but this was his first foul ejection of the season.

Rebounding was a major Achilles heel for the Miners against the Roadrunners as they were out-rebounded by a 47 to 32 margin. Defensively this may have been the Miners’ worst game as they gave up the most points to an opponent by nine more than the previous high of 77.

Junior big man Eric Vila returned to the starting lineup for the first time in four games as Terry stayed with the players who played the most minutes in the last game. Sophomore Jordan Lathon went his fourth straight game without making a field goal since returning to the team after entering the transfer portal. Lathon is a combined 0-11 in his last four games and his minutes have dipped below double digits during that time.

Hoping for its first road win, the team next faces conference opponent the Rice University Owls (9-10, 1-5), which has won the last two home games against the Miners. UTEP plays at 6 p.m. 23 Jan. at Rice in Houston. The game will be televised on ESPN + and broadcast on AM Radio 600 ESPN El Paso.