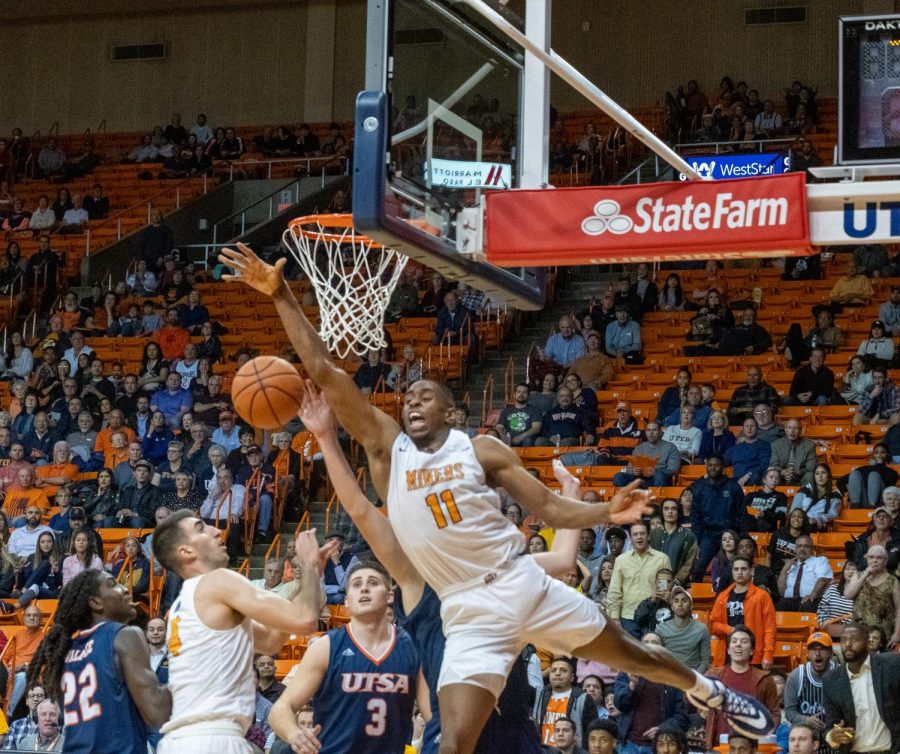 The UTEP men’s basketball team came back from a 24-point margin against the University of Texas at San Antonio Wednesday night to win in overtime 80-77. Junior Bryson Williams took the team on his back as he scored a career-high 34 points with 20 of those coming in the second half.

“The thing we kept trying to echo to our guys was work the game possession by possession and not rely on home runs, “Head Coach Rodney Terry said. “Easily the best comeback as a head coach I have been involved with.”

During the first eight minutes of the first half, the Miners were engaged in a tough back and forth with the Roadrunners trailing by only one point. Less than three minutes later, the Roadrunners had soured to a 10-point lead at 24-14 led by the second-leading scorer in the nation junior guard Jhivvan Jackson and his 14 points and eight rebounds in the first half. Sophomore Keaton Wallace led all scorers at the half with 18 points for the Roadrunners, who shot 48 percent as a team from the field.

Shooting a dismal 32 percent from the field, the Miners struggled in all areas in the first half. Defensively UTEP had issues guarding anywhere on the floor and offensively were too one dimensional relying on less than stellar three-point shooting. Fortunately for the Miners, they shot slightly better from the three-point line than from the rest of the floor and got to the line more consistently than UTSA, which only had one free throw in the first half.

At the half, the Miners trailed 42-28 and outrebounded 22-17 while doubling the number of turnovers of UTSA. No Miner outside of Williams had more than six points, and sophomore guard Souley Boum was one of six from the floor. The arena was in a bitter mood considering the expectations of facing a UTSA that was below .500 squad at home and trailing by double digits.

The lineup changes only seemed to make matters worse for the Miners as UTSA stretched its lead to 20 points, so after four minutes, both Stroud and Verhoeven were replaced on the floor by junior Eric Vila and Boom. Both Vila and Boum would play the remaining 21 minutes of the game for the Miners, helping to lead the comeback. Williams would play the entire second half and overtime for UTEP and a total of 42 minutes on the night. Williams played all but three minutes of the game and his ability to get to the charity stripe was key in the comeback as well as avoiding foul trouble.

At the 14-minute mark of the second half, the Roadrunners now held a 54-30 lead, which brought out vocal disdain from many fans as the most distinct boos of the season were heard in the background of the arena. With 12 and a half minutes left in the game, Terry made his final substation he would make by bringing Nigel Hawkins back in the game trailing by 20 points. In a span of five minutes, the Miners went on a 20-2 run to pull within six points of the Roadrunners.

With 10 minutes left in the game, the Miners had found their rhythm and were forcing other UTSA players to make shots outside of its big two. Only three UTSA players scored any points at all in the entire second half and its offense was becoming very predictable. UTEP forced the Roadrunners into nine turnovers and took full advantage of the mistakes made by UTSA.  Second chance shots were also being minimalized by better blocking out under the boards, especially by Vila and Williams. Williams finished the game with 10 rebounds as the Miners closed the gap in rebounding advantage with 39 from each team.

A layup by Williams tied the game in regulation and the teams went into overtime tied at 68. There were no lineup changes made for overtime. The first three minutes and half of overtime went back and forth with no team able to carve out a significant advantage. A dunk by Vila off a quick pass from Williams gave the Miners a three-point lead with a little over a minute left in-game. The UTEP lead was extended on free throws from Boum to 79-74 with 50 seconds left. A heavily guarded Jackson hit a three a few seconds later for UTSA to narrow the lead to a single basket. With about 16 seconds to go, Williams missed a shot for UTEP, giving the Roadrunners a chance to tie. UTSA missed two consecutive three-pointers, including one blocked by Vila, which sealed the victory for the Miners 80-77.

The Miners survived the efforts of Jackson, who ended the game with 29 points and 13 rebounds with a strong defensive effort by senior Darryl Edwards, making him work for every point. Edwards also helped on the offensive end with 18 points as well as playing the final 25 minutes of the game.

“One of the best feelings I ever had playing basketball, “Edwards said. “We are all learning to lead, and Bryson did a great job of leading the team tonight.”

We believed that even though we were down so much, we knew if we played defense, we could get in a position to win the game,” Williams said.