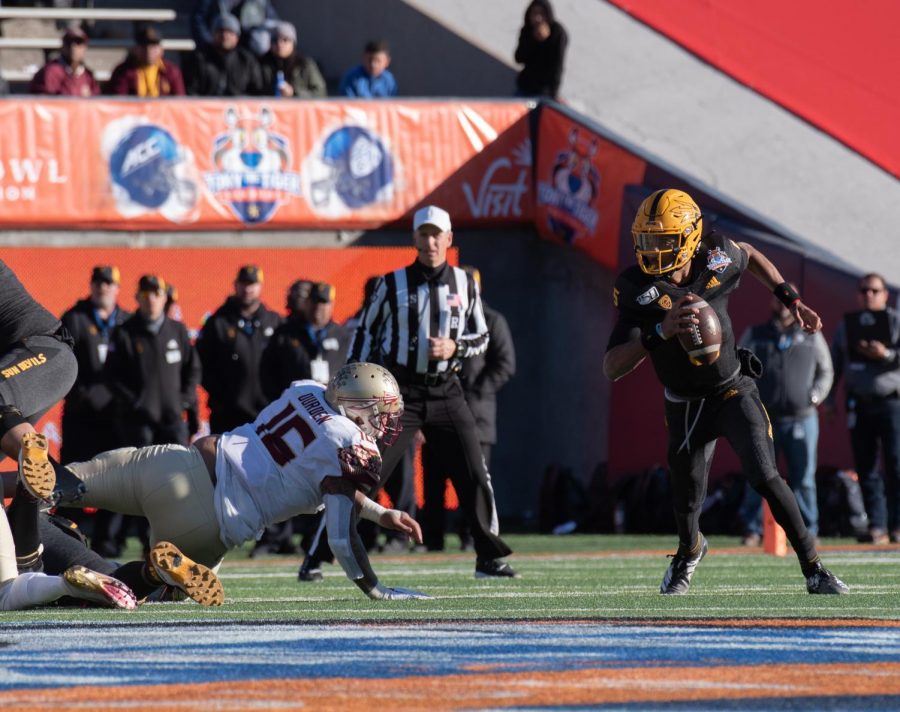 Six turnovers forced by Arizona State turned out to be Florida State’s kryptonite as the Sun Devils snapped a three-game bowl losing streak in their 20-14 win over the Seminoles on a beautiful New Year’s Eve in El Paso, Texas.

42,412 fans were treated to an exciting bowl game between two teams from power five conferences in Arizona State and Florida State. The Seminoles just five years removed from winning a national championship came into the Sun Bowl with a 6-6 record, while Arizona State came in with a 7-5 record and a huge win over eventual 2020 Rose Bowl Champion, Oregon.

It was just the second time this season Florida State was held scoreless at the half.

Arizona State bounced back in the fourth quarter with 11 straight points behind a 34-yard field goal from sophomore kicker Christian Zendejas, and the Sun Devils first pick-six of the season  would end up being the game winning play by sophomore defensive back Willie Harts with 10:06 left in the 4th quarter.

The Sun Devils were also led by standout true freshman quarterback Jayden Daniel’s 195 passing yards and a team high 36 yards on the ground.

Blackman on the other hand struggled tremendously behind center for the Seminoles throwing for a career high four interceptions and was sacked four times in the game.

“I didn’t perform at the level that my teammates needed me to perform and I gave the ball away to many times and you can’t win games like that,” Blackman said.

The Sun Devils also had two fumble recoveries along with the four interceptions for the game.

“We just go with the momentum that’s what we do, and we just want to be that unstoppable defense that goes out there and plays hard and keep making stops,” senior defensive back Kobe Williams said.

Florida State hired new head coach Mike Norvell in Dec. 2019 and the Seminoles were led by interim head coach Odell Haggins, has been with the program for 28 years.

“This game was a very pleasing game to the eye by any stretch of the imagination and you have to give credit to both defenses I thought they played really good,” Edwards said.

The Sun Devils were held to their fourth lowest rushing outing of the season with just 87 yards on the ground.

“ To end the season with a bowl game was very important and it’s a good way to set the 2020 season off for us and to go to a bowl game you have to get invited and this team earned it,” Edwards said.