Activists, academics say indigenous women are among most vulnerable in Mexico’s femicide crisis, amid global protests 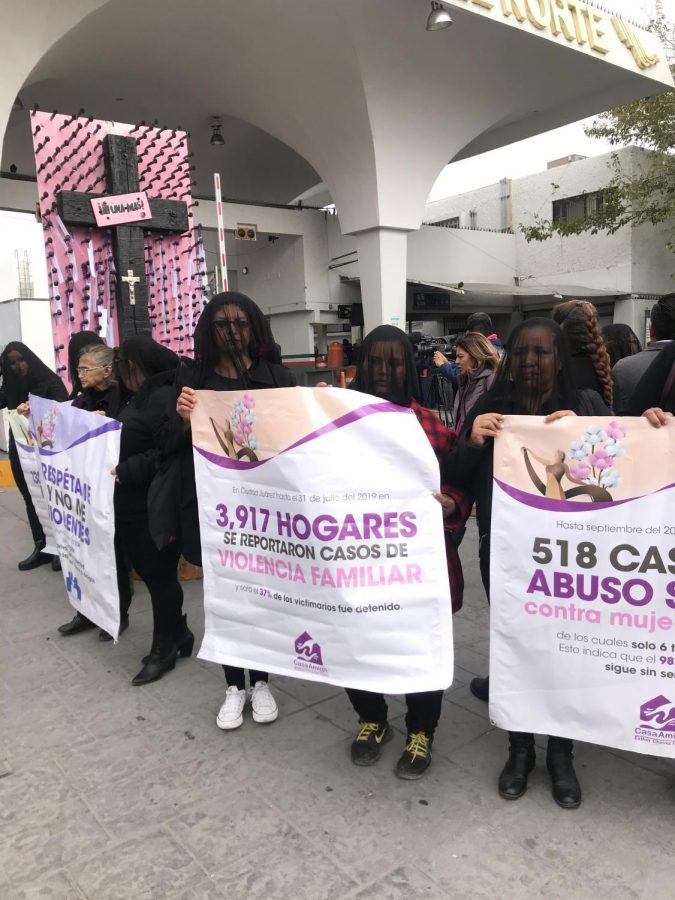 Anti-femicide advocates standing in solidarity to protests the disappearances and deaths of women throughout the country late November in front the Paso del Norte international port of entry.

A wave of anti-femicide activism rippled throughout the globe last month protesting the disappearances and grotesque murders of young women on International Day for the Elimination of Violence Against Women, and it eventually reached El Paso and Ciudad Juárez, Mexico, where activists and academics say being poor and indigenous are significant risk factors.

“Femicide is a purposeful attack on women because they’re women. It’s not just any homicide,” said Guillermina Gina Núñez-Mchiri, director of women and gender studies at the University of Texas at El Paso. “(Parents) want to know, ‘Why did this happen to my daughter? Who did this to my daughter? Who would dump my daughter’s body in the desert?’ and here, there’s a vast desert.”

According to Informe sobre Violencia contra las Mujeres, a data report on gender-based violence in Mexico, the country saw a total of 833 cases of alleged femicides nationwide between January and October of this year spanning more than 2,460 municipalities.

The report includes continuous data from the past four years, disclosing a national total of 3,578 victims of femicide since January 2015, with 341 of those victims being under 18-years-old.

The report also reveals that Ciudad Juárez, a city with a female population of more than 727,600, was the municipality with the third highest number of femicides at 1.65 per 100,00 women, well above the national average of 1.25 femicides per 100,00 women.

Although there’s sound data available for gender-based violence, Mexico’s federal statistics agency released an editorial in 2017 acknowledging its challenges and limitations in collecting data that “truly reflect the characteristics of (femicide), not only at the national level, but also for certain population subgroups of interest like the various indigenous groups in Mexico.”

Femicide has several causal factors that have been examined by academics for decades like the impacts of neoliberalism, drug cartel foul play and even police corruption, but scholars have widely argued that being indigenous and poor exacerbate the risk of exploitation which often leads to femicide.

“Why prey on indigenous women? Why prey on poor women and young women? Often times, in terms of what brought so many women to the maquilas by the border, is this need for labor,” Núñez-Mchiri said. “In rural Mexico and southern Mexico, they don’t have jobs. They don’t have industries.”

In a scholarly article for the academic journal Gender & Development, researchers assert that Mexican authorities typically fail to acknowledge “unequal gender relations” which “is itself evidence of gender discrimination, and of discrimination on the basis of class and ethnicity, as victims are often poor, indigenous or migrant women.”

Activists echo these exact same notions that poor and indigenous women are among the most vulnerable to femicide.

“Right now, the concern is that we’re seeing more and more murders of women now than we did during the height of the femicides. It’s not only just the killing of women, but the targeting of brown, young women,” said Cemelli de Aztlan, a local activist based in El Paso. “We’ve seen a history of indigenous brown women being raped, mutilated, exploited and murdered throughout the Americas.”

De Aztlan tries to remedy this reality by volunteering with La Mujer Obrera, a social enterprise founded in 1981 by Chicana activists that offers an array of programs and services to uplift disenfranchised women of Mexican heritage.

“Feminicide to me was an issue I already had a political commitment to and (her death) just reinforced that for me,” Márquez Méndez told the crowd in Spanish. “Guadalupe was a woman that lived in the rural community of Cherán, Michoacán, that belonged to the indigenous Purépecha tribe.”

At the event, Márquez Méndez recited a eulogy she wrote to commemorate Campanur Tapia, someone she considered a lifelong friend. She titled the eulogy “Guadalupe Campanur ¡Vive!”

“Lupe was a woman who kept the traditional Purépecha embroidery technique alive with her beautiful drawn thread blouses. She had such beauty and technical precision in her work that, in her final days, she received recognitions and invitations to present her embroideries in different places,” Márquez Méndez read aloud in Spanish at Café Mayapan. “The femicide against Lupe and so many other women in Mexico was a sinister warning for the women who remain indolent in the face of such acts.”

Márquez Méndez explained that anti-femicide activists like herself play a very vital role in restoring dignity to the lives of the women who fall victim to femicide by speaking about exactly who they were as women and the legacy they left behind as human beings.

She believes that advocates humanize the women who have passed.

“Our commitment is to dignify the lives of the assassinated women and to name them, so they’re not just a number,” Márquez Méndez said in Spanish. “And it would not be easy because that implies knowing in detail the person’s way of life, and how that loss hurts.”

The femicide of Campanur Tapia is just one of many that have systematically transpired in Mexico since its peak in the 1990s, affecting women from a variety of backgrounds.

In late November, the mothers of femicide victims stood by the entrance of the Paso del Norte port of entry in Ciudad Juárez to stand in solidarity and protest femicide.

Yadira Cortés, a human rights defender with the Juárez-based anti-femicide organization, Red Mesa de Mujeres, joined the grieving mothers who all covered themselves in a black veil.

Cortés believes that Mexico’s cultural underbelly of misogyny, commonly known as “machismo,” is a major contributing factor in the femicide crisis.

“The (patriarchal) system itself raises macho men who violate women’s bodies, because 99.9 percent of the aggressors are men,” Cortés said in Spanish. “Today we are highlighting the data of 145 victims of femicide in Ciudad Juárez only in 2019. All these were killed by a man.”

When asked about the impacts of neoliberalist initiatives like the North Atlantic Free Trade Agreement (NAFTA), which scholars argue exploit cheap female labor, Cortés disagreed, saying that machismo is the main culprit.

KTSM reported that 17 women were victims of homicide in Ciudad Juárez last November alone, with one found dismembered and another “whose head was wrapped with a plastic bag.”

Nonetheless, activists and academics in Ciudad Juárez, El Paso and throughout the world continue to advocate for a world free of femicide.