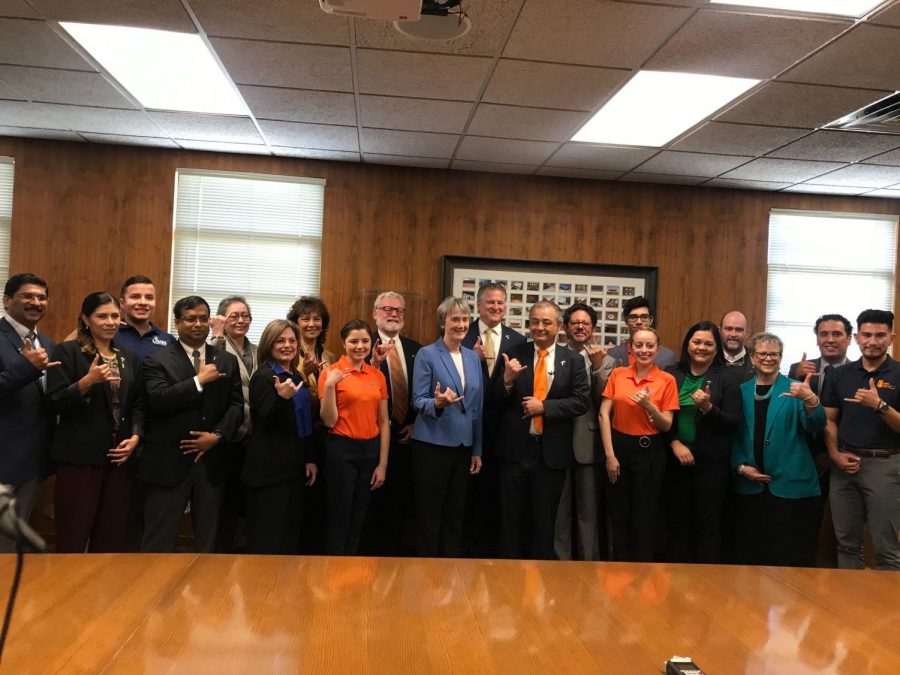 The University of Texas at El Paso (UTEP) announced it surpassed a milestone of $100 million in research expenditures after securing 200 grants in 2019, totaling more than 530 active grants Thursday, Dec. 5.

“Research is fueled by our faculty through competitive funding,” said UTEP President Heather Wilson at the press conference.

Wilson reported the exact figure of $108 million in expenditures beforehand to the National Science Foundation (NSF) for its Survey of Research and Development Expenditures at Universities and Colleges, according to a news release.

“It is not just the big grants that we care about; it is about the grants our faculty (are) passionate about,” Vice President for Research Roberto Osegueda told The Prospector.

Wilson and Osegueda stood with students, faculty and several administrators who have contributed to research and developments, including UTEP research administrators William Hargrove and Craig Tweedie, among others.

Osegueda boasted that the university is now well positioned to expand its research efforts not just with funding, but with the tentative opening of UTEP’s new research building.

Osegueda said more than 530 grants were active this year at UTEP. He calls this the “magic number,” which has been the standard number of yearly active grants the university has had for the last three years.

An award is considered active when at least some of the funding is used during the current academic year. Of the more than 530 active, only about 200 new grants were awarded in 2019.

“50 percent of the funds are secured by 10 percent of the people,” Osegueda said. “There is that 10 percent of special individuals who are big in writing applications and securing money, who are leaders and invite the participation of other faculty to interact.”

The Office of Research and Sponsored Projects (ORSP) recognizes those who totaled more than $1 million in research expenditures every year with the Millionaires’ Club Award. The complete list can be found in ORSP’s newsletter.

A notable awardee this year was Juliette Caire, whose research expenditures totaled nearly $2.4 million from a single grant from the U.S. Department of Education for the GEAR UP Partnership. She had this year’s highest expenditure.

GEAR UP (Gaining Early Awareness and Readiness for Undergraduate Programs) provides comprehensive support for middle school students and has been operating at UTEP since 1999.

In a UTEP news release, Caire said the new grant’s main goal is to assist students in preparing for and attending college.

The majority of the funds that UTEP secures externally every year are nationally competitive.

“This is our faculty competing against faculty from all the universities in the country,” Osegueda said.  “We don’t succeed in all of them, but we succeed at rates of 30 percent, which is very, very good.”

“Other universities that are very affluent in terms of endowments do not need to be writing grants to get money because they’ve got the money available to do their research; that’s what makes it special,” Osegueda said.

The external agencies that award faculty include the Department of Health and Human Services, the National Institute of Health, the National Science Foundation, NASA, USDA, Homeland Security, the National Endowment of the Arts, among many others.

In the 2018 fiscal year, 87.7 percent of these agencies were federal. Out of those, 94 percent granted more than one award to the university, according to information provided by the ORSP.

“There (are) many, many people in the campus writing grants, not only just do the research, but also to support students,” Osegueda said.

Such is the case of Associate Professor of Computer Science Salamah Salamah, principal investigator of the project “Developing Software Engineering Leaders of Tomorrow.” His project was awarded $742,174 by the U.S. Department of Education and will launch one-credit courses to enhance students’ leadership and professional skills.

“Everybody wants computer scientists, but we want to make sure that our students … are enhanced with leadership skills and all that, so that hopefully they can move up the ladder faster,” Salamah told The Prospector.

In the fiscal year of 2018, 1,531 students were supported through all grants across the university, according to ORSP.

“When (students) get involved in grants, with the level of engagement that our faculty does, it is just a very short path to success,” Osegueda said.

According to Osegueda, UTEP did “very well,” attributing the securement of big grants for its success.

At the end of the press conference, Wilson turned to the students, faculty and administrators by her side to thank them.

“I wanted to say that you’ve done an exceptional job and I know that a lot of you went into education both because of the opportunity to influence students, but also to drive discovery and find out new things, and I hope you keep enjoying it along the way.”

Marisol Chávez and Bryan Mena may be reached at [email protected].