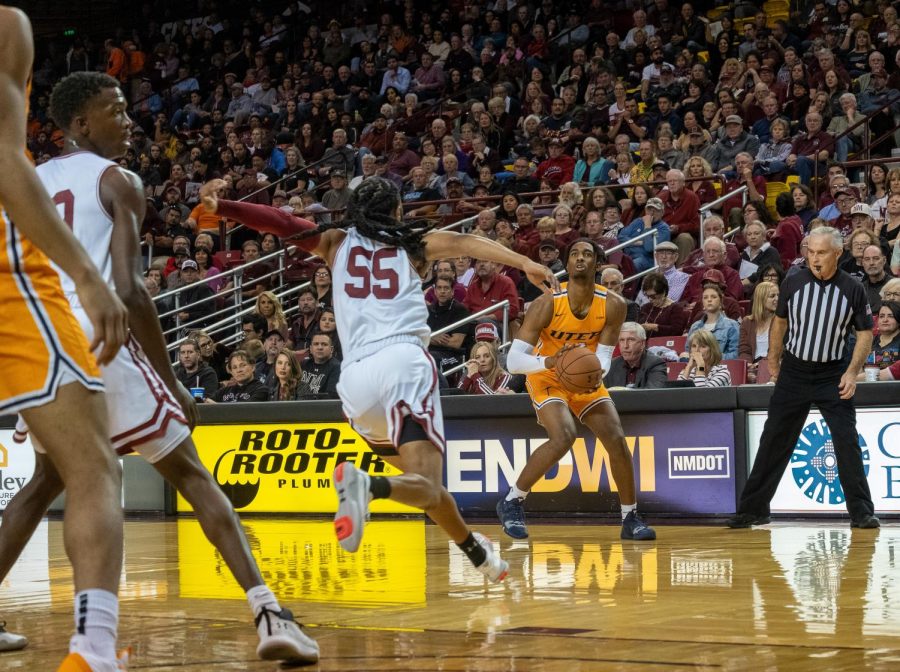 The Miners came up short Tuesday against longtime rival New Mexico State (NMSU) with a final score of 59-56. Sophomore forward Bryson Williams led the team in scoring once again with 27 points.

In the first half the Miners went toe to toe with NMSU tied for a while at 6-6. Bryson Williams then made a three–pointer to give the Miners the lead. 9-6. The Aggies responded with a lay-up and to cut the lead to two (9-8). The back and forth continued with NMSU tying the game (18-18) off a turnover that was committed by Miners sophomore guard Jordan Lathon. The Miners found itself with a six-point deficit before cutting cut the lead to four with a jump shot by sophomore forward Efe Odgie (27-23). At the half, the Miners would still trail by four points.

UTEP got in foul trouble, which led to more points from the Aggies. The Miners committed nine fouls in the first half. The Miners missed a lot of wide-open looks from the 3-point line, shooting 3-of-9 in the first half. NMSU took advantage of those misses to build a lead. The Miners got to the free-throw line, which would cut down a marginal lead from NMSU that would balloon up to five points.

The Miners opened the second half trailing by six (31-25) before responding with a three-point shot by Williams. The Miners then made two free throws to cut the Aggies lead (31-30). The Aggies in the second half dominated inside the paint increasing its lead to four (34-38).

At that point, both teams started to heat up from the 3-point line. The Aggies then sank a pair of 3-point shots to extend its lead. The Miners proceeded to answer back with a 3-point shot from sophomore guard, Souley Boum. The Aggies continued to find a way to the hoop with its big men, increasing the lead to six points. The Miners were down three points later in the second half (55-52). The Miners got a pivotal block to get the ball back followed by a timeout from Head coach Rodney Terry to draw up a play. The Miners missed the shot that was drawn up from beyond the arc.

NMSU took advantage of that miss and took the ball to the hoop. The Aggies then missed a shot but drew key fouls increasing the lead (57-52). Quickly responding, the Miners rebounded by going to the foul line to cut the lead down to three (57-54). The Miners got one more shot in the game as UTEP headed to the free-throw line, cutting the lead down to one (57-56). The Miners had to race down the floor to get a timeout after NMSU sank both free throws. UTEP lost to the Aggies by a final score of 59-56.

Falling from the ranks of teams without a loss, the Miners are now 5-1 on the season, while NMSU improves to 5-4.

“Give those guys credit those guys were tougher than us,” Terry said. “Perimeter guys guarded really well, but we did not get it done in the paint. We must deny the ball in the post. We have not played our best basketball yet. We are still learning what it takes to win on the road.”

The Miners next take on the Arkansas Pine Bluff Golden Lions (1-5) 7 p.m. Saturday Dec. 7 at the Don Haskins Center.

Danny Lopez may be reached at [email protected]