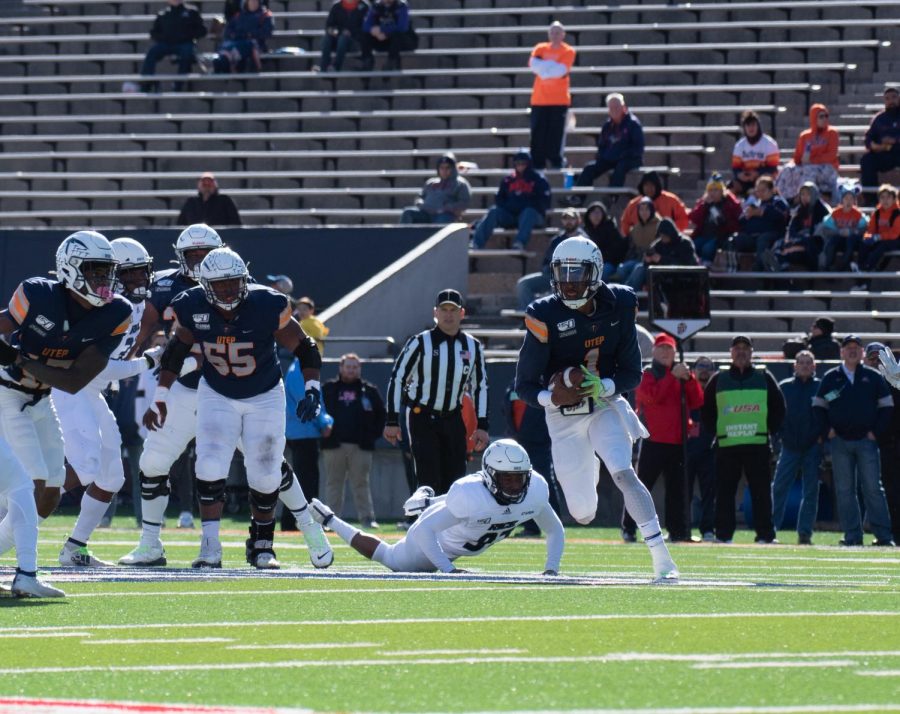 The 2019 season did not go as many Miner fans expected and the season finale after two quarters looked promising for UTEP with a 16-14 lead. In the end the Miners fell to Rice (3-9, 3-5) 30-16 on a windy afternoon earning their 11th straight loss, finishing the year 1-11 and winless in Conference-USA play in front of 11,776 fans at the Sun Bowl on Senior Day.

Rice would take the lead after a rough punt by the Miners in the windy conditions that put the Owls in UTEP territory. Rice graduate transfer quarterback Tom Stewart connected with junior wide receiver Austin Trammell on a three-yard touchdown reception on a three play 28-yard drive.

UTEP bounced right back with solid defense forcing Rice within their own three-yard line as Miner redshirt freshman defensive end Praise Amaewhule recovered a fumble by Stewart in the end zone for a touchdown. The PAT was no good by redshirt senior kicker Brady Viles.

Rice scored once again in the first quarter off a 30-yard rushing touchdown by graduate transfer Aston Walter with two seconds remaining in the quarter as the Owls took a 14-6 lead.  Walter finished with a game and career high 149 rushing yards and averaged 9.3 yards per carry.

The running game of the Owls bested that of the Miners in the first quarter with Rice outgaining UTEP 61-19.

Rice finished the matchup with 256 rushing yards to the Miners 99.

The Miners scored 10 points in the second quarter and held the Owls to zero. UTEP senior quarterback Kai Locksley linked up with redshirt junior wide receiver Justin Garrett for a 12-yard touchdown reception. A false start calls on the Miners spoiled UTEP’s opportunity at a two-point conversion as they opted for the extra point.

Locksley would go down with a hand injury towards the end of the first half and did not return for the rest of the game as he was seen on the sideline with a cast on his forearm.

Sophomore kicker Gavin Baechele converted a 45-yard field goal with 3:51 remaining in the first half to put the Miners up 16-14.

The Owls held the Miners scoreless in the second half as UTEP sophomore quarterback Gavin Hardison stepped in for the injured Locksley but struggled in the beginning to get into a rhythm going 1-for-5 for 9 yards.

Hardison did find a bit of momentum after the rough start finishing the game with 123 passing yards on 11-of-24 attempts.

Rice sophomore quarterback JoVoni Johnson tacked on two rushing touchdowns in the second half from eight and 11 yards. Johnson finished the game with 62 rushing yards for the Owls.

The Miners struggled to find any sort of momentum in the second half offensively.

For UTEP head coach Dana Dimel this season was one of improvement and the Miners have a lot to build upon heading into the 2020 season.

“I thought in a lot of ways we improved, and I thought we were a better football team than last year by all means and I feel we got ourselves in situations where we could’ve won four or five ballgames this year.” Dimel said. “The team played extremely hard and made some strides and every coach in the conference would tell you how hard we played.”