Seeking to revive a sense of normality for employees and community 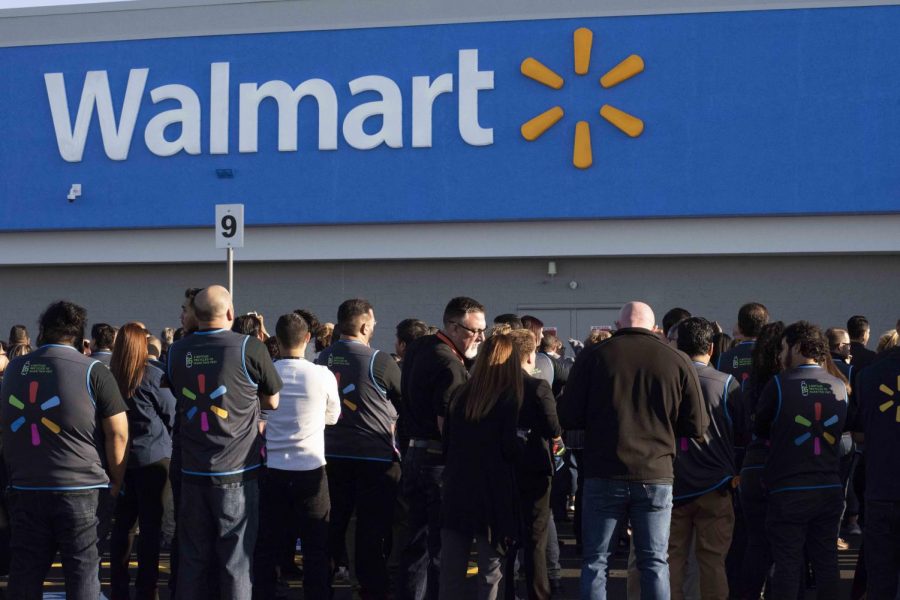 Cielo Vista Walmart employees gathered outside the store Thursday, Nov. 14. After opening the store’s doors for customers, they cheered and welcomed people as they entered.

Doug McMillon, Walmart’s president and chief executive officer, made an early appearance in front of the store to greet employees returning to their home store for the first time in months.

Robert Evans, the store’s general manager, hopes to help the community recover from the tragedy by reviving a sense of normality in opening the refurbished store.

“I’ve got my associates and my management team who’ve been working really hard to get the store open,” Evans said. “They’re going to see a very fresh new look in the store, a lot of new technology and just a better shopping experience.”

Raul Navarro, a retired 74-year-old resident, patiently waited next to his van to enter the store. With a cigarette pressed between the corner of his lips, Navarro said the store should not suffer because of the tragedy.

“It’s not the business’ fault. There are folks nowadays killing just about anybody. The business has its clientele and has to keep selling,” Navarro said in Spanish.

Employees were eager to return to the Cielo Vista Walmart, despite the circumstances of the tragedy.

Security guards stood around the perimeter of the store, who appeared to be contracted from Brosnan Smart Security Solutions.

Dozens of Walmart officials and employees exited the store before 8 a.m., convening a few feet away from the store’s doors.

A banner with the hashtag “#ELPASOSTRONG” was unveiled shortly after.

“I’m for the reopening. It’s unfortunate that (the shooting) happened,” said Ceci Lopez, 47, waiting to enter. “Life goes on, whether it’s at home, at the roads, in school — life goes on.”

Amidst the flock of employees and media personnel, a handful of residents quietly observed the event in the background.

“I have heard the mixed reviews on the Walmart reopening,” said Jordan Flores, a 20-year-old college student who stood in a corner of the parking lot. “If all these employees are happy to go back to work — as sad as the event was — God wants us to be happy. No matter what evil there is in this world, you can always overcome it.”

Customers were allowed into the store just before 9 a.m. Several Walmart employees stood inside by the entrance, loudly cheering on and greeting those who entered.

Security guards were scattered throughout the store.

“I’m just glad to be back with my coworkers,” said Raven Ramos, current Cielo Vista Walmart employee, wiping tears from her face. “It was a very long journey to get here.”

Lucero Lopez, 44, attended the reopening and was also at the scene during the August shooting.

“I came out of the emergency back door during the shooting,” Lopez said.

She said people were confused and asking for help during the shooting.

Lopez believes that the only option is to remain strong.

“You never know when is your last day, but here I am,” Lopez said.

The store’s ten checkout lanes were all open, along with both of the self-checkout stations on each side of the store.

The liveliness and vibrancy of the once busy Walmart came back to life.

“This is our Walmart. I live nearby and this has always been my Walmart,” said Gloria Parga, 75, in Spanish as she held recently purchased Christmas decorations. “I felt so much emotion. I cried so much that my Walmart is finally open.”

Parga was also at the scene of the August shooting. She recalls people leaving the store, panicking about the shooter.

Walmart released a statement late October confirming the construction of a memorial dubbed “Great Candela” to honor the 22 killed. Walmart officials expect the construction to take four to six weeks from the date of the announcement.

The structure will stand 30 feet high in a plaza on the south side of the store’s parking lot, consisting of 22 individual perforated aluminum arcs grouped together into one.

Following the Aug. 3 mass shooting, members of the community commemorated the victims themselves by erecting makeshift memorials near the Walmart.

City officials say that some of those items were moved from the backside of the store to the nearby Ponder Park.

“Ponder Park became the place where our community gathered in the immediate hours following this horrific attack, and we hope the park will continue to be a place where people can go to reflect and heal,” said Tracey Jerome, quality of life deputy city manager, in a news release.

As shoppers return to the store and the construction for the memorial continues, the AP reports that local prosecutors have said they will seek the death penalty for the 21-year-old mass shooter who pleaded not guilty to capital murder charges.

Multiple reports and sources deemed the attack a hate crime against Latinos and an act of domestic terrorism, referencing an online manifesto. Eight Mexican nationals were among the 22 killed.

The Arizona Republic deemed the attack “one of the deadliest hate crimes in American history against Latinos.”