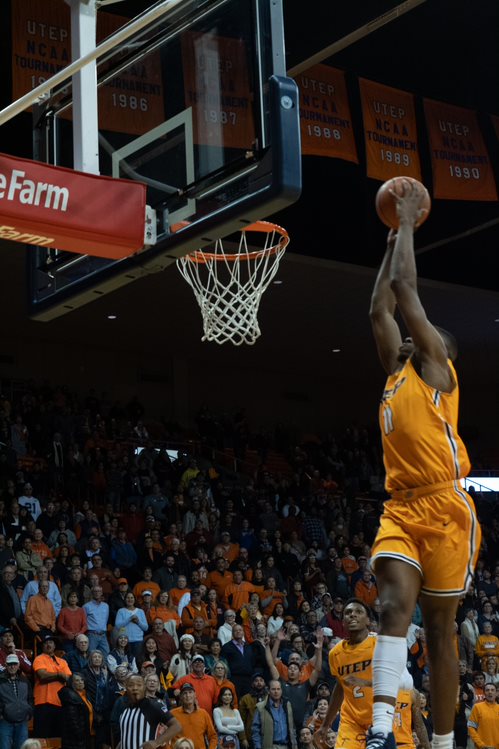 UTEP junior forward Bryson Williams goes for a slam dunk towards the closing seconds against NMSU in the Miners 65-50 win.

A new era of UTEP men’s basketball is here and if the Miners performance against New Mexico State tells anything it’s that this group is not to be taken lightly.

Behind a tough defense, constant makes around the rim, and a roster that is filled with depth the UTEP men’s basketball team (2-0) defeated the New Mexico State Aggies (1-1) 65-50. This is the Miners first win over the Aggies in nine contests with its last win going back to Nov. 22, 2014.

UTEP held the Aggies to 37 percent shooting from the field for the game and forced 16 Aggie turnovers. This is the second game in a row and now the fourth game including exhibition matchups in which the Miners have held their opponent to under 40 percent from the field.

“This time of year, we’re really trying to instill in our guys that you really got to take a lot of pride defensively and to guard as hard you can guard,” UTEP head coach Rodney Terry said. “We’ve had four games right now and we’ve held every opponent to under 40 percent and we’re still building right now and trying to establish our identity, but the guys are trying to buy into what we’re trying to do especially from a defensive standpoint.”

The atmosphere in the Don Haskins Center was electric with 8,993 fans in attendance including El Paso product and Green Bay Packer star running back Aaron Jones, and former Presidential Candidate and El Pasoan Beto O’Rourke.

“It was great to see all the fan support and all the excitement for us because we really work hard so to see that they’re really supporting us it feels good to be here,” sophomore guard Jordan Lathon said.

Lathon earned the mantra “walking bucket” after finishing the game with 13 points and led the Miners in points in the first half with nine.

“Their size on the perimeter didn’t allow us to catch the ball where we wanted to and we were just uncomfortable offensively and they did a good job of making us uncomfortable,” New Mexico State head coach Chris Jans said. “They thoroughly out played us took us to the woodshed and they deserved to win.”

The Aggies were without senior point guard and 2019-2020 All-WAC Second Team preseason selection A.J. Harris who is out for eight weeks with a fractured finger.

The Miners turned up the intensity in the second half outscoring the Aggies 37-25 while shooting 50 percent from the field (13-26).

“We played a lot better in the second half by far and we knew we had to lock in on defense knowing this is a good offensive team and they can really shoot the three ball very well,” junior forward Bryson Williams said.

One bright spot for New Mexico State was senior guard Trevelin Queen who finished the matchup with a game high 21 points, knocking down three three-pointers for the night.

UTEP was led by Williams with 19 points and eight rebounds but did have to overcome foul trouble committing two fouls in the first half, and one more early in the second half. Williams would overcome that roadblock putting up a near double-double in just 17 minutes of play.

“ I had a couple of bad fouls but for the most part I just try to tell myself to just stay in the game the big picture is we need to get the win and when I get in and my number’s called I just get ready to do what I do,” Williams said.

“This was two really good teams and a great matchup, and we knew to hold that team to 50 points in terms of their shooters and I thought our guys came out and competed at a very high level,” Terry said.” This time of year, when you play in these types of games, you’re only going to get better and I think we got better tonight.”

UTEP will hit the court again and continue their five-game homestand this week against Eastern New Mexico at 7 p.m. Nov. 15 at the Don Haskins Center.