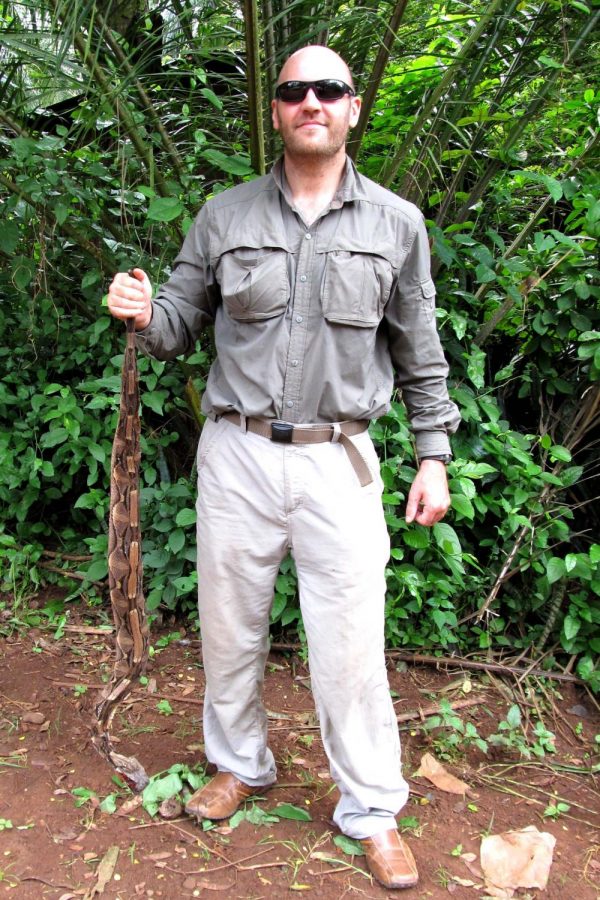 Eli Greenbaum, associate professor of biological sciences at UTEP, led a study that was recently published in the Journal of Natural History. The study focused on the suspected mimicry of Gaboon vipers by the rare Congolese giant toad.

The vipers and the toads are both species of the African rainforests. It is thought that the coevolution of the two animals is a strong basis to support the theory that, in order to avoid predators, the Congolese giant toad is able to contort its external appearance in a way that mimics the highly venomous Gaboon viper.

The idea for the project came about during the fall of 2018, after coauthor Teresa Edmondston noticed a resemblance between one of the toad specimens discussed in a class she was taking at the time and the Gaboon viper.

Greenbaum happened to be taking the same class and, after hearing Edmonston’s observation, he recruited two of his doctoral students, Vaughan and Teshera. Together, they began to develop a hypothesis.

“That’s really where it started,” Vaughan said. “Somebody noticed the possible mimicry and we looked into it.”

“(Kusamba) said that when you get near them, they let out a hiss, like air being let out of a balloon,” Teshera recalled. “He also said they kind of arc their bodies in a way that might mimic a viper’s head when they get ready to strike.”

This description was an important element in the research and indicated exactly what Greenbaum and his team should look for.

After obtaining the lab specimens from museums and other sources in Congo, the team took precise measurements of each animal’s shape and color pattern.

“I measured the viper heads,” said Teshera, “Gene, the other Ph.D. student and coauthor, measured the toads.”

Teshera went on to explain how, after comparing measurements, they were able to determine that the color patterns and shape of the toad matched well with the viper’s dorsal surface, or the top of its head.

Despite the overwhelming support for the team’s hypothesis, proper testing has yet to be done.

“This isn’t like a slam dunk,” Teshera said. “The problem is, you would have to test it and verify it experimentally over there, which would be very difficult to do.”

Experimental testing would require the research team to travel to Congo and observe the Congolese giant toad for long periods of time — time that is unavailable to Vaughan and Teshera at this point in their academic career.

“I think it’s unlikely that I would get out there and test it,” Vaughan said. “My research is primarily evolutionary research and, while the hypothesis is largely an evolutionary question, testing it is mostly in the wheelhouse of ecology and that’s not what I do.”

Likewise, Teshera’s dissertation focuses on the behavior of rattlesnakes, not toads.

“I think I can speak for all of us by saying that we did as much as we could without conducting behavioral experiments,” Teshera said. “I think we did everything we could to show that this phenomenon is probably occurring.”

Still, publication of the research Greenbaum and his students conducted means a great deal within the scientific community.

“As scientists, that’s kind of the name of the game,” Teshera said. “We need to publish our research so that we can share it with the scientific community.”

To Vaughan, seeing his name in an academic journal was surreal.

“I’ve been reading scientific papers probably since I was 11 or 12,” Vaughan said. “It’s definitely cool to see and it’s an important step for me.”