Sister cities divided by a wall of metal, united by a bridge of light 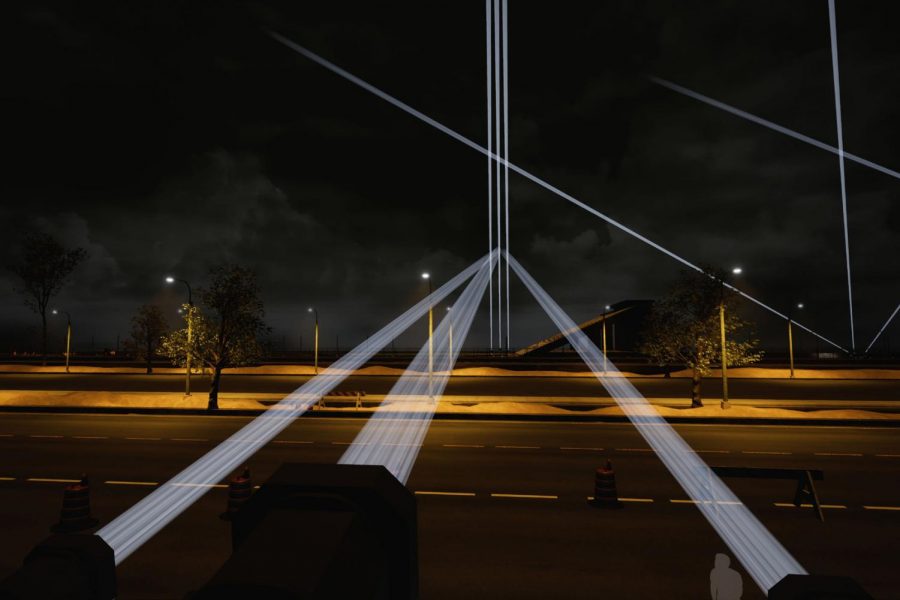 The connection between the bordering cities of El Paso and Ciudad Juárez will be showcased visually and audibly through microphones and beams of light.

Border Tuner is an interactive art installation which aims to visually represent the deep connection El Paso and Ciudad Juárez have through the concept created by Rafael Lozano-Hemmer.

Six stations are set, with three on each side of the U.S.-Mexico border. Curators and individuals are allowed access to point a beam of light toward another beam whether on the same side or across the border.  The individual then uses a microphone and speaker to transmit their speech or conversation onto the other station and vice versa. At the start of each nightly event, all beams of light will intersect at one fixed point for all stations to hear at the same time.

“Magnifying existing relationships, conversations and culture. The piece is intended as a visible ‘switchboard’ of communication where people can self-represent,” the project’s website, bordertuner.net, reads.  “Draw international attention to the co-existence and interdependence between the sister cities that create the largest binational metropolitan area in the western hemisphere.”

With light pollution in mind, Hemmer was concerned with the carbon footprint the event would have on the environment and made sure the installation only uses up to 126 kilowatts of power.

Hemmer also disclosed his concerns on preserving dark skies in the website, to which he states the project will not have any lasting impact on light pollution.

“For me, light pollution is a serious issue and I am aware of the inconvenience that the project will cause,” Hemmer wrote in the website. “Our lights do diverge with distance and lose intensity by the square of their target’s distance.”

Every night, there will be different forums and tents from local organizations, vendors and significant individuals from the surrounding region for people to visit.

Hemmer will hold a conference Wednesday, Nov. 20, on Mexican technology and its past titled “Techs-Mechs: A Run Through the History of Mexican Technological Culture.”  The following day will have an activation opening performance and conversation by the local LGBTQ+ community from both sides of the border.

The Border Tuner’s closing night will feature local performers and will hold a final forum presenting the “legacy” of the project.