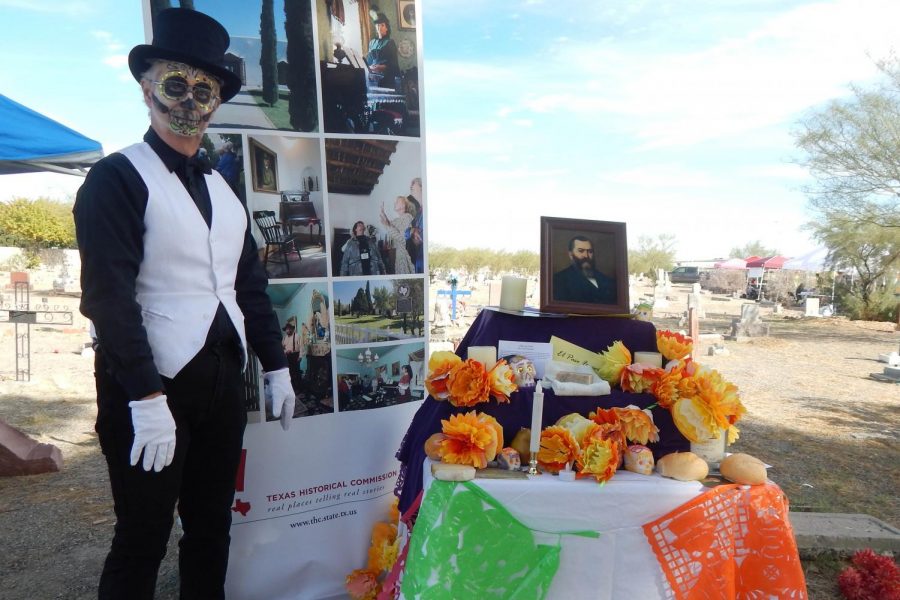 Locals and organizers gathered at Concordia to observe the local Hispanic holiday Día de Los Muertos in honor of loved ones, historic figures, and fundraising.

Locals gathered to observe the traditional Mexican holiday, Día de Los Muertos, Saturday, Nov. 2 at the historical Concordia Cemetery to honor loved ones who have passed away.

The cemetery opened at 2 p.m. allowing visitors to enter for a $5 donation benefitting the Concordia Heritage Association, a nonprofit that works to preserve and maintain the historical cemetery.

Visitors were able to walk freely around the cemetery and enjoy live performances, check out vendors and have their faces painted.

As the sun set, the performances concluded with a fire dance by M.O.B. Tribal Group.

Visitors also learned bits of historical information about the cemetery, its buried residents, and the holiday itself from the cemetery’s staff and event volunteers.

“To honor the traditions of the Southwest, it is to honor those lives who made El Paso what it is,” Kiddney said. “So we are here to honor them, but to also to preserve the legacy and history of El Paso.”

Currently, more than 65,000 graves are located in Concordia. Within this sea of graves are a dozen members of Alicia Martinez’s family members who were buried but not kept track of.

“I’ve been able to locate six (of them,)” Martinez said. She has made it her goal to find the remaining unmarked relatives.

Martinez told her story at her own booth, displaying an altar with the traditional three layers and an additional section showcasing the ashes of her pets that passed away.

Martinez celebrated the holiday in remembrance of her ancestors, including her famous uncle Silvestre S. Herrera, a WW2 veteran who was discharged after losing his legs in a mine field. Herrera was awarded the Medal of Honor by U.S. President Harry Truman on Aug. 23, 1945.

Nearby, Frank Varela, who is a Mojiganga dancer, wore a skeleton costume typically mounted onto the person’s shoulders. It is used to celebrate the holiday and give spectators a taste of Mojiganga culture.

“They originated from Spain and were brought into Mexico around the 1600s. They were introduced to give a little cheer and liveliness to religious festivities,” Varela said. “Then Mexico took it a step further and started using them for funerals and death processions.”

Jeff Harris, site manager for the Magoffin Home, stood before an altar commemorating Joseph Magoffin, the pioneer and constructor of the historic site. Harris offered a take on the Magoffin Home regarding the celebration.

“We’re celebrating Día de Los Muertos, and the Magoffin Home is here because Joseph Magoffin is half Irish and half Mexican,” Harris said. “He was born in Chihuahua and was one of the early mayors of El Paso.”