University pushes for attendance: Number of students at games drops by half at midsemester 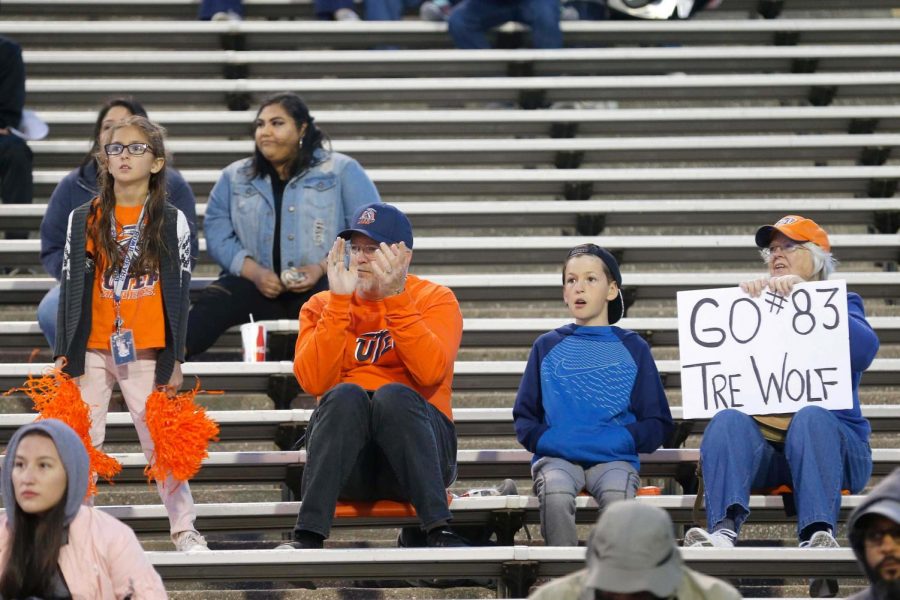 The university’s football season started off with a strong supportive audience.

The university’s football season started off strong this semester, with more than 34,000 football fans filling up the Sun Bowl Stadium as the UTEP Miners took a 36-34 victory over Houston Baptist.

Since then, the Miners have returned to a losing streak for the past six games, meaning attendance has also dropped, with about 16,000 fans attending the team’s last home game against Louisiana Tech.

“We recognize our students have very busy lives,” said Catie McCorry-Andalis, UTEP’s associate vice president and dean of students. “You have your academics, research, internships … We have to regularly remind students ‘Hey, you can go to a football game, a basketball game, a softball game, whatever it is.’”

In an effort to make these challenges easier on students, the university has abandoned any prior ticket registration. Now, all students need to do is bring their Miner Gold Card to get into the football games.

“As a result of that, we’ve seen more students coming to the games,” McCorry-Andalis said.

UTEP has also begun to increase its student body spirit through marketing strategies as the university now has a director of spirit operations who is in charge of hosting events every week before a football game.

The Orange and Blue Spirit Crew also debuted this fall and will continue on to basketball season. The university also began to display a large banner promoting UTEP games and Paydirt Pete has been even more present on campus.

“It’s really about visibility and getting out there,” McCorry-Andalis said. “You can’t take it for granted that anyone knows there’s a game. We’ve got busy lives and lots of things happening in the city. Now we have to make sure we market things.”

Although the university is increasing its efforts to promote attendance and student engagement, some students still find themselves not participating.

“I’ve always wanted to go to a game,” said Ana Sofia Santiesteban, a UTEP senior majoring in psychology. “All my friends and I live all the way on the East Side, so it’s kind of an inconvenience to come all the way to the West Side.”

Others find themselves consumed in school assignments, making it difficult to attend games or engage in school spirit.

“I’m a little bit more focused in getting through this program,” said Yoko Kato, a senior enrolled in UTEP’s nursing program. “This program is very demanding and it sometimes feels separated from the entire school.”

Still, the university will continue to promote student participation in order to equally see the success of its sports teams, like it has done in the past through the successful “Every Person Makes A Difference” fundraising campaign launched by Director of Athletics Jim Senter.

“I think it’s important to attend,” said Jordan Dominguez, a biological sciences major. “These sports players are students too, so, as students, we need to support each other in whatever way.”

UTEP will face off the University of North Carolina at Charlotte at 1 p.m. Saturday, Nov. 9, at Sun Bowl Stadium.