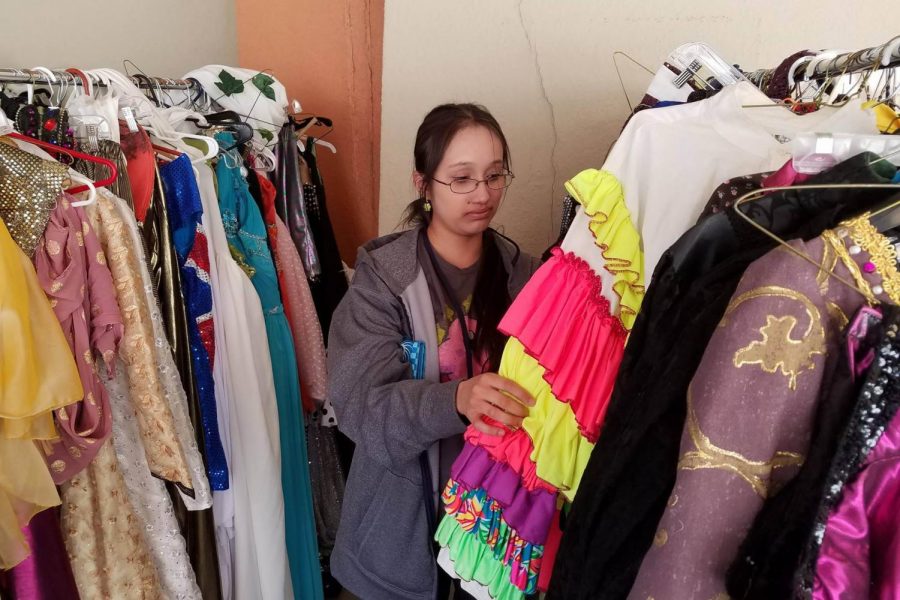 The UTEP Dinner Theatre rent costumes at the Union Breezeway.

Halloween festivities call for costumes. From partying to going trick–or–treating, the season invites people to dress up in their favorite characters. UTEP’s Dinner Theatre Costume Shop is further extending this invitation by renting out its own custom-made pieces and accessories until Oct. 30, for anyone looking for a specific costume idea at an affordable price.

“I know people might go to stores and pay all this money for something they’re only going to wear once,” said Jaime Barba, the dinner theater’s custom designer, who has been running the shop for 13 years. “They can get a great quality costume, pay a small price, look good and not have to worry about spending a lot of money.”

The costume shop consists of a wardrobe made of  the theatre’s past productions. A complete outfit goes for $25, while costume pieces and wigs range between $5 to $10. A costume from the dinner theater costs $50, less than the average amount Americans spend on Halloween costumes, according to a 2017 Forbes study revealing men spend on average $96 on their costumes, while women will spend an average of $77.

“As young adults, who are trying to socialize, some people don’t have the financial resources to have fun on Halloween night,” said Tracy Huhn, a UTEP linguistics major. “So, for them to provide something like that is really nice.”

Aside from trying to help relieve economic stress of costume shopping, Barba also rents his pieces to help supply the dinner theater production with new equipment.

“I’ll go out on Halloween sometimes and I’ll see someone wearing one of the costumes,” Barba said. “And I’ll go ‘Hey I made that!’ or ‘That’s from UTEP.’ It’s cool.”

Although Halloween season is the only time Barba advertises his costume shop, he rents his pieces all year long.

From theatres around the country to film students, Barba rents his work to a variety of different customers. This form of exchange also establishes what a student believes to be a good way to practice the reuse of materials.

“I think it’s a good idea for sustainability,” said Miriam Aguirre, 20, and a UTEP communication studies major. “Buying a lot of costumes every year adds up a lot of money but it also wastes a lot of fabric, because people don’t use the same costume every year. Now people can use one costume and return it and then next year they can get something different.”

UTEP students or members of the general public looking to rent one of Barba’s costumes can contact him via email at [email protected] or at 915–747-5492 and must be ready to show a UTEP ID or driver’s license.

As for returning the costume, customers are only asked to bring it back in good condition by Nov. 4.