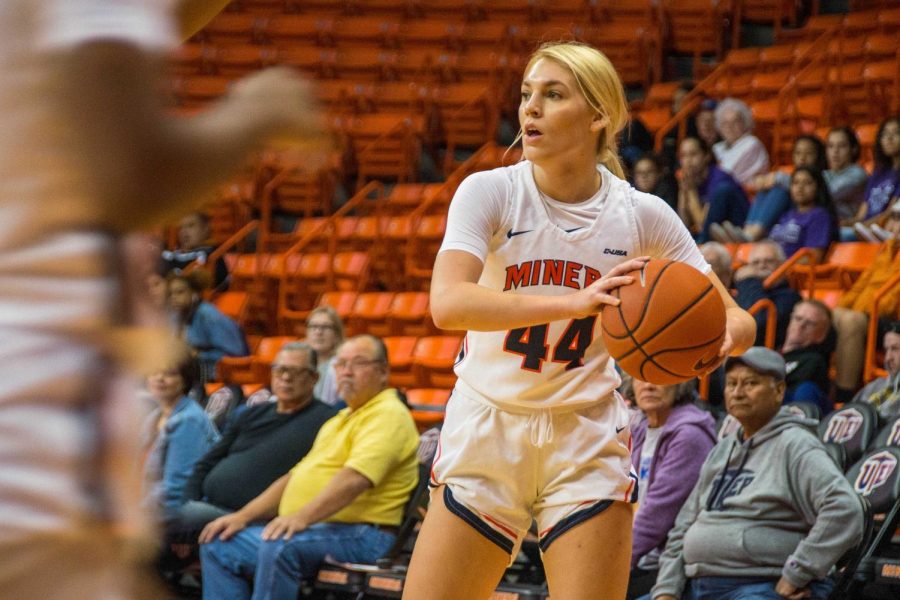 Senior Katarina Zec leads the team for the upcoming season.

The game was the first of two exhibition contests for the Miners before the Nov. 9 season opener against UC Riverside. Senior forward Katarina Zec led the team in scoring with 18 points.

“I thought the team played really well as a whole,” Head Coach Kevin Baker said. “We had a positive assist/turnover ratio from our point guard; it’s been tough sledding the past couple of years. Now we’re getting into positive numbers and I’m proud of that.”

Consistent play from the point guard position is  what the Miners have been missing the past few years. The performance Saturday has given UTEP a substantial confidence boost for the challenges they will face during conference play.

“This is probably my first season that we’re complete on the point guard,” Zec said. “It is always good when you have somebody to lean on in the guard spot when she distributes the ball and takes care of the ball—it’s good and gives me confidence.”

The Miners brought in seven newcomers to the team, including freshman forward Tatyana Modawar and homegrown talent Katia Gallegos, from Franklin High School. Both were instrumental in notching the team’s first win. At one point during the first half, Baker sent in four freshmen and a sophomore to the floor.

The young team stormed onto the court, looking to impress in the team’s debut at the Don Haskins Center.

Three top 100 junior college transfers have been added to the Miners, including All American juniors Tia Bradshaw and DeJaNae Roebuck, both from Hutchinson Junior College.

The Miners’ lead ballooned to 26 in the final minutes, proving the incoming players have integrated well in the program.  Modawar contributed 15 points and four rebounds in limited play.

“She works extremely hard and puts a lot of extra hours in the gym,” Baker said. “To see players get payoff for that hard work makes me feel really good. She’s only going to get better.”

Eastern New Mexico struggled to regroup following a shaky first half and conceded a total of 26 turnovers in the end. Senior Natalie DeLonge led the the Greyhounds efforts, scoring 16 total points for the contest.

The Miners’ final exhibition game versus St. Marys is set for 1 p.m. Saturday, Nov. 2 at the Don Haskins Center. Admission is free.