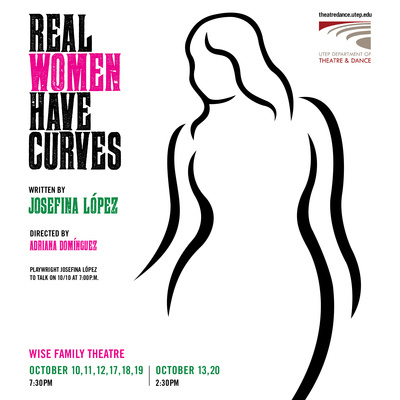 Written by Josefina Lopez and directed by Adriana Dominguez, the UTEP Department of Theatre and Dance performed a two-hour long play between its Oct. 10 debut until its conclusion Oct. 20 to shine a spotlight on Latina women, their power and the personal struggles every woman has to deal with.

Taking place in an East Los Angeles sewing factory during the first week of September 1987, the play tells the story of five hard-working Mexican-American women who try to meet a tight deadline for a specific production order.

Starring Paola Dubrule as “Ana,” Isabelle Rivera as “Estela,” Larissa Reyes Arzate as “Rosali,” Jennelle Villa as “Pancha,” and Alexis Medina as “Carmen,” the story is told from Ana’s point of view as she writes in her journal her memories in hopes to get her autobiography published once she became a famous writer.

As the five women work together to meet their dreaded deadline, they address several topics, such as immigration, bodyweight issues, romance, marriage, abortion, pregnancy, sexuality, education and the injustices they suffer working for a big corporation that pays them small wages.

Arguably one of the most prominent performances was by Medina, who played Carmen, Ana and Estela’s mother. Medina had the audience laughing as her character displayed traits reminiscent of typical Latina mothers.

Rivera as Estela also gave an emotional performance as her character struggled with being undocumented and being the owner of the shop with everything at stake.

Reyes Arzate’s performance as Rosali was a sobering reminder of the dangers of eating disorders and “sketchy” diets. Her performance was upbeat, kind and warm even though it touched on the serious topic of anorexia.

The message of the play was that no matter how different women are personality-wise, or in physical terms, real women should be proud of their “curves,” both physical and metaphorical.

“It was fantastic, it was realistic and it was right on point,” attendee Leticia Batson said. “I liked it all.”

On its opening night, the show began with playwright Josefina Lopez giving an introduction.

Tickets were priced at $18 for adults, $15 for UTEP alumni and faculty, staff, seniors, military and non-UTEP students, and $12 for UTEP students and children under age 12.

The play was part of this year’s Hispanic Heritage Celebration.

Alejandra Molina may be reached at [email protected]