Congresswoman Veronica Escobar visits UTEP for a conversation with students 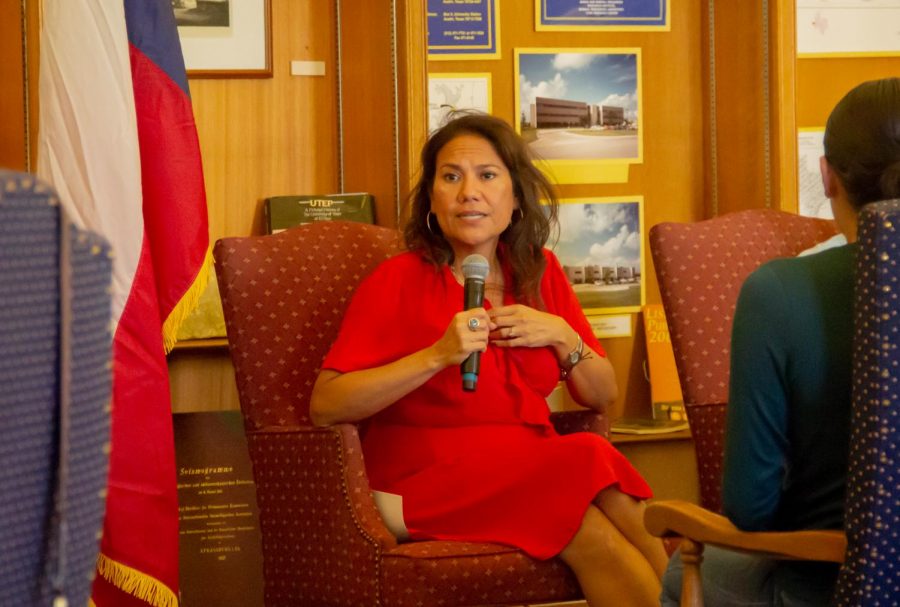 Congress representative of District 16 Veronica Escobar was invited by SGA to talk about the community and education on Oct, 7.

The event featured a panel made up of SGA senators.

Escobar has been an active voice in the recent border crisis.

Some of the most notable initiatives that Escobar has supported in the nine months since her election include the protection of citizens against gun violence, addressing immigration challenges in a humane way and promoting generic competition for prescription drugs.

Escobar is not one to shy away from political conversations, and this meeting was heavily influenced by conversations about education and immigration challenges in El Paso, Texas and neighboring Ciudad Juárez, Mexico.

Escobar opened her speech by highlighting achievements and transformative progress as part of the House of Representatives and promised to continue to deliver for El Pasoans.

After her opening remarks, a panel of SGA representatives was introduced. The panel was made up of Adriana Chavez de la Rosa, senator for the College of Liberal Arts; Austin Stephens, senate majority leader; and Luis Hinojos, senator-at-large. The panelists each took turns asking questions.

Panelists asked Escobar about Heather Wilson, UTEP’s new president, and the resistance she received after her nomination. Escobar said she had a conversation with Wilson where she voiced her hopes of inclusion and her view of what she referred to as “El Paso 2.0,” which seeks to keep students working in El Paso after graduation.

When asked about her opinion on standardized testing and whether Congress had a say, Escobar said that she believed the education system in the country is outdated and “not innovative,” confessing that she did not do well on her SAT.

She does recognize, however, that testing is necessary and hopes for a change in the education system.

The most prominent topic at the event was the topic of immigration, ranging from the border shut down to asylum seekers.

Victoria Rivas, a junior at UTEP, considers the most important topic to be about asylum-seeking in the U.S.

“Our laws are broken and outdated,” Rivas said about immigration laws.

With President Donald J. Trump’s constant threats to close the border, many students are left wondering how a border shutdown would affect their lives. Escobar called the idea of closing the border “shocking and unacceptable” as the bridges between El Paso and Cd. Juárez are “key economic lifelines.” Escobar called for an increase in U.S. Customs and Border Protection (CBP) officers as there is no “formal policy” and they should be at the ports of entry.

Over the months, El Paso has been on the map for the immigration crisis and the detention and separation of families. Escobar said that she believes “all humans deserve grace” and to be treated humanely.

The president of the university’s Green Team spoke about environmental issues such as the expansion of hemp in Texas, the poisoning of fields and its harm to people. Escobar said she feels “hopeless” in terms of the denial of climate change.

“Each and every one of us who believe in climate change want to make sure that we have the type of government that tackles honestly, ambitiously and urgently,” Escobar said. “We’re going to keep fighting for that, and each and one of us has the power to create change.”

Escobar was asked about her statements after Trump announced his visit to El Paso in the aftermath of the Walmart shooting.

“I have publicly said he has a responsibility to acknowledge the power of his words, apologize for them, and take them back because they are still hanging over us. I asked for a call so I could say this to him over the phone and ask for a dialogue that could lead to healing,” Escobar wrote on a Facebook post.

Escobar said that she stands by what she said.

“He had no place here,” Escobar said about Trump’s visit.

“Our hearts are completely broken by this needless loss of life, especially here in our beautiful home,” was written on a sheet passed out by Escobar’s team.

Paulina Spencer may be reached at [email protected].