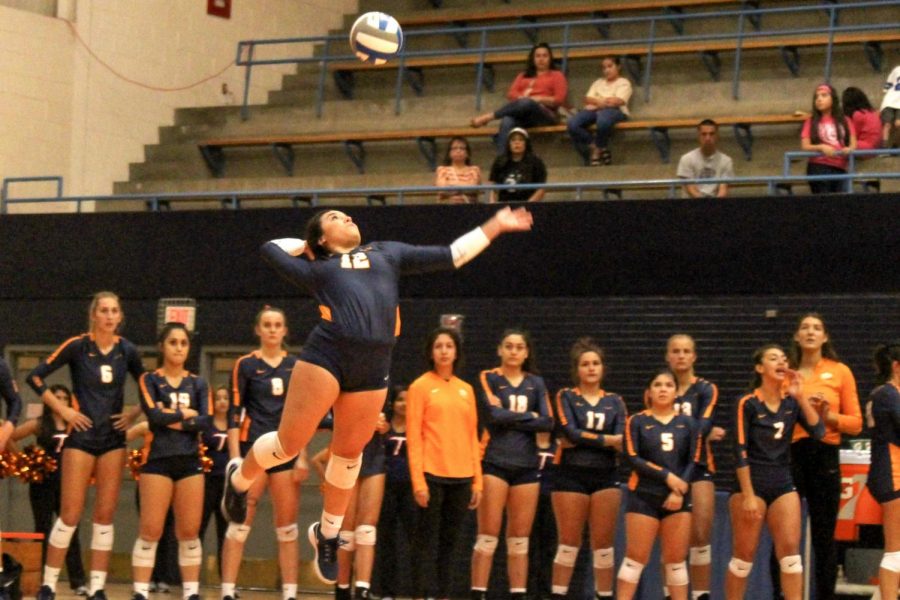 While the result was the same as the past Sunday losing in four sets, the Miners were much more competitive as they lost two of their sets by just two points. to the Roadruners. The previous matchup had the Miners losing three straight sets by eight points or more  after winning the first set in San Antonio.

The Miners were without promising freshmen Irbe Lazda and Alianza Darley who have been standouts for the team this season and are potential members of the Conference USA all-freshman team. Both these players have been frequent starters and appeared in most of the games played this season. Lazda ranks fourth on the team in service aces with 15 and Darly is fifth on the team in kills with 80.

“We are beat up for sure but that’s why you have a big roster. The players on the floor have to execute for us,” Coach Ben Waller said.

Darley had the misfortune of injuring her ankle in pre match warmups, joining Lazda on the bench who has been out for the past six games with a broken foot. Senior Brianna Arellano was recovering from a groin injury which hampered her play quite a bit in this match.

The opening set was all UTEP as the Miners never trailed in the game winning 25-20.

The second set was a complete reversal with UTSA dominating from early in the set and once they took the lead at 4-3 the Roadrunners never looked back with a 25-19 victory.

Opening the third set the Roadrunners were still dominating like the previous set, starting off with a 6-1 lead but the Miners fought back and tied it at 18. Later in the set the Miners and Roadrunners were tied at 23, but UTSA scored the next two to pull out a close win.

UTEP, now faced with being down by a set were in a must-win situation in the fourth game. Twice in the final set the Miners took the lead by three points, the last being at 15-12. The teams went back and forth for the second half of the set with the Miners finding themselves at game point up 24-23, but two consecutive attack errors by junior Cheyenne Jones sealed the fate for UTEP falling 26-24 in the last set losing the final three points.

“We didn’t execute at the end and they did,” Waller said. “That’s the difference between a win and a loss at this level against a good team.”

Waller felt that having played against two of the top teams in Conference USA showed that they were capable of competing well with the rest of the conference and that the team is gaining confidence as well as trust in the staff.

The UTEP leader for kills was junior Anamarija Mikovic with 11 with senior Serena Patterson second with 10. Alex Torres led the team in digs with 14 and Patterson had 12 to notch a double-double for the match. Junior Mallory Yost led the team in blocks with five with Jones having four.

For the Roadrunners, Hanna Lopez paced them with 13 kills along with four digs and Kara Teal was a force defensively as she had eight blocks against the Miners.

UTSA has constantly been an elite team since they entered Conference USA with a 71-17 record and hold a 14-1 series advantage over the Miners since 2010 when UTEP upset them  games to two.

Ben Waller is in his first year as UTEP’s head coach,  after being an assistant at I-10 Rival New Mexico St. since 2013.

“I feel confident that we are going to give ourselves a chance to be in the mix for the conference tournament,” Waller said.

The Miners played in front of an estimated 1,100 UTEP fans against  UTSA, which was the largest crowd at Memorial Gym since  1,543 showed up Sept.11, 2011 versus Southern Methodist. The crowd was noticably enthused with the Miner’s effort as they cheered on the home team.

“I’m really excited about the people in this stands that were starting to get behind us, “Waller said it was an exciting atmosphere here.”

The Miners have back-to-back home games this coming week. UTEP plays UAB  6 p.m. Oct. 11 and Louisiana Tech noon Oct. 13 Both games will be in Memorial Gym.