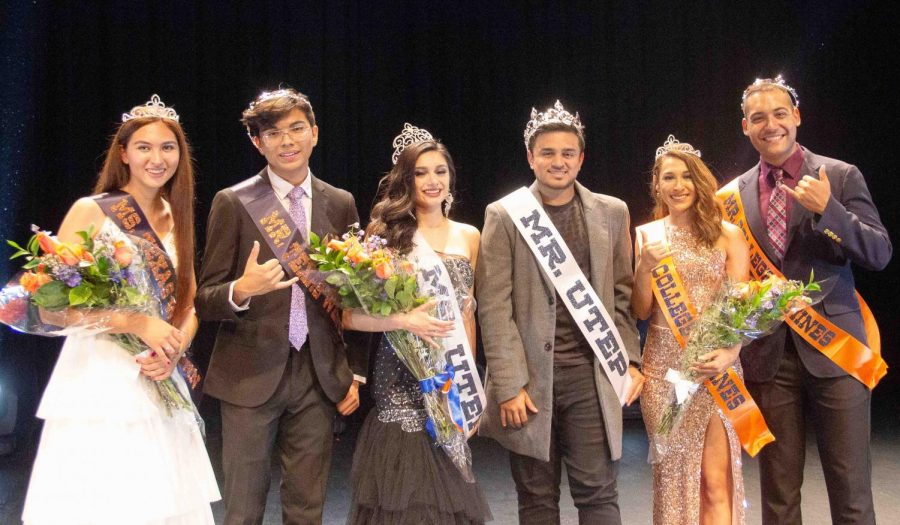 The winners of the 2019 SGA Pageant show.

The Student Government Association (SGA) kicked off this year’s Homecoming festivities with its annual homecoming pageant show Friday, Sept. 27 at the Magoffin Auditorium.

SGA has been hosting the pageant show for over 25 years and Natalia Dueñas, senator-at-large, was proud to be a part of this year’s show.

“It has been an SGA tradition for a really long time and we are happy to continue with it,” Dueñas said.

Priscilla Gallegos, collegiate senator of business, wanted to demonstrate through the pageant that UTEP is as diverse as it claims to be.

“We want to show people that we are a diverse campus by incorporating the theme of being global,” Gallegos said.

For the opening number, each contestant was assigned a country to represent, Miss Universe style, and wore attire to represent the respective country. All contestants were introduced on stage by name.

For the second number, the contestants individually performed their talent in front of an audience and a panel of judges.

This part showcased the talent UTEP students have to offer through singing, dancing and even a make-up tutorial.

The audience was enthusiastic and supportive of every performer throughout the night.

Krissana Haugen, 20, was there to support her cousin, who is in a sorority, and enjoy the show.

“I think the whole show is pretty fun,” Haugen said.

After a short recess, the contestants came back on stage one by one to show off their outfits for the formal segment of the show. From perfectly fitted suits to floor-length gowns, all of the contestants wowed the audience and judges.

After deliberation amongst the judges, five female and five male contestants were chosen to continue on to the last part of the pageant.

During the final segment, contestants drew a question from a bowl to answer in front of everyone, including their competitors. With questions ranging from favorite school traditions to changes they would implement on campus, the contestants gave it their best while being in the spotlight.

Once the judges decided on the results, SGA announced the 2019 SGA Homecoming Pageant winners which included Mr. and Ms. College of Mines, Mr. and Ms. Texas Western and finally Mr. and Ms. UTEP.