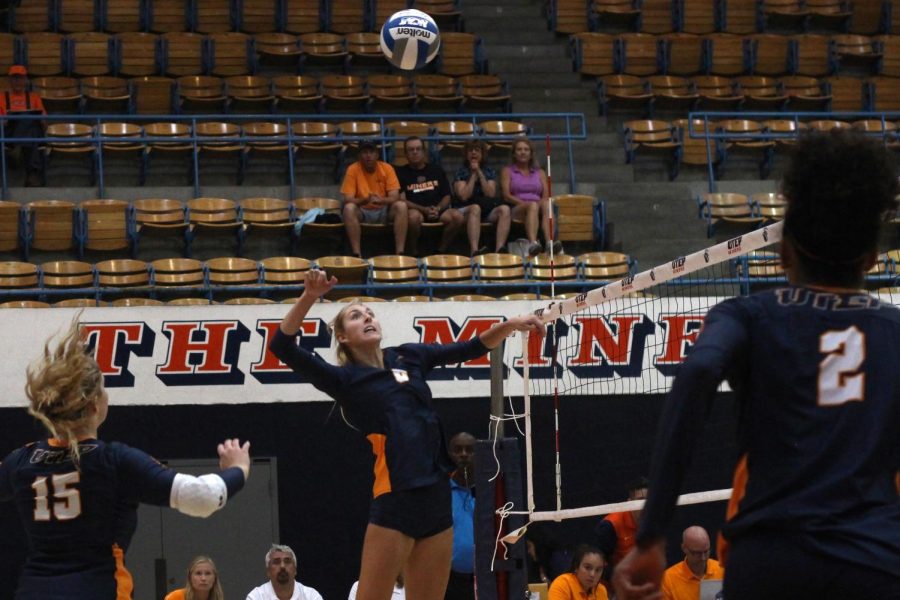 UTEP stands at 4-3 after losing its last two matches of the Borderland Invitational. Despite a promising start, winning their first two matches Friday, the Miners lost two very close games versus Pacific and I-10 rival New Mexico State this weekend.

In Friday’s first tilt, the Miners swept three games against Coppin State winning (25-21, 25-17,25-19). In the first set the Miners were down 13-12 but went on to score five  points buoyed by two kills from junior Cheyenne Jones. Sophomore Serena Patterson would close out the first set with a kill for a 25-21 win for the Miners.

In the second and third sets, the Miners led by  10 points as they closed out the Eagles in three  games. Sophomore Kristin Fritsche finished this matchup with a season-high 20 assists and sophomore Alex Torres finished with 16 digs.

UTEP versus Texas A &M-CC

UTEP’s second match of the day would see them win a five-set series versus Texas A & M Corpus Christi. The miners opened the match by losing the first two sets 25-18 and 25-15.

In the third set, the Miners were locked in a 9-9 tie when they went on an unanswered six-point run with Jones once again getting crucial kills on the way to a 25-15 set victory.

The fourth set was close up until both teams were tied at 16, but a four-point Miner run shut the door with a 25-19 victory.

Freshman Irbe Lazda led the way for the Miners with 16 kills as well as three service aces.

In the final set of the match, the Miners fought back from four points down to tie the score at 10 points apiece. Forced errors took the Miners out of the match as they ended up losing the final decisive set 15-11. Patterson paced the Miners with 10 kills for the match.

Taking a two to one set advantage after three sets, the Miners did not see a lead in the fourth set as they went on to lose by 10 points trailing most of the way. In the fifth and deciding set, the Miners followed the same path, not seeing a lead in the final set of the match. Patterson paced the Miners with 12 kills and Fritsche led the team with 19 assists in the final match.

The Miners will travel to Missoula, Montana for the Missoula Invitational on Sept.13 to face Montana, Montana State and California Bakersfield in this series.