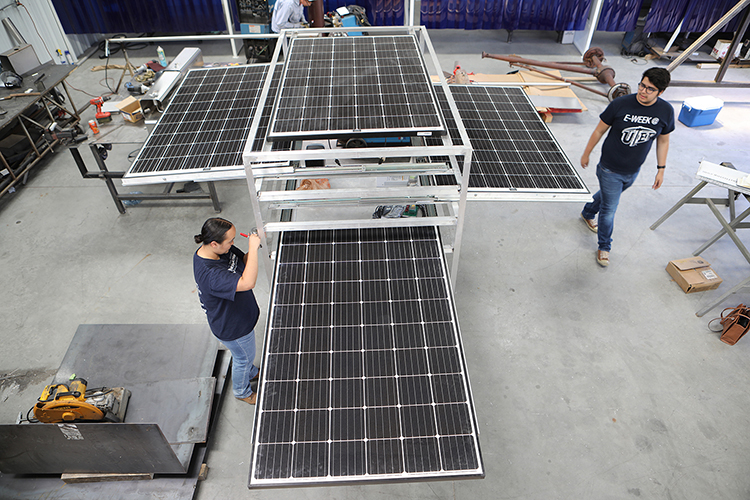 A portable charging station designed by Ivonne Santiago, Ph.D., clinical professor of civil engineering at UTEP, was on display on campus Tuesday, Aug. 27.

Ivonne Santiago, clinical professor of civil engineering at UTEP, unveiled a project dubbed the “portable charging oasis” Tuesday, Aug. 27 in the walkway between the Liberal Arts and Administration buildings.

The project is an endeavor known as “peace engineering,” which is the “application of science and engineering principles to promote and support peace,” according to the International Federation of Engineering Education Societies.

Santiago’s project is a solar-powered portable charging station equipped with four AC outlets, four USB ports and four retractable solar panels that slide in and out. Overall, it provides 1,500 watts of renewable energy. The pinnacle of the portable charging oasis is its sustainability and practicality.

“It is made of aluminum, which makes it lightweight and rust resistant which is important in coastal environments. It weighs less than 1,000 pounds,” Santiago said. “It is easily movable from one place to another. It can even be relocated with a motorcycle. We also eventually expect to install a hot spot for Wi–Fi using cellular service where available.”

The portable charging oasis also contains a refrigerator which plays a live-saving role in times of crises where there is no power for extended periods of time, such as the storage of insulin. Insulin needs to be stored under a 46-degree Fahrenheit temperature and, even if there are enough supplies, there is no consistent electricity, making the preservation of this medication difficult, Santiago explained.

“The refrigerator, conceivably the most important part, is used for people that need to store medications such as insulin,” he said. “Many of the deaths in Puerto Rico after Hurricane Maria were directly attributed to the lack of electricity for life-sustaining needs such as medications.”

Stephanie Marquez, a UTEP student majoring in environmental science, highlighted the fact that Santiago’s project is “low cost” and “dependable” which are two crucial aspects of sustainability.

“Instead of relying on a utility company, they will have the access readily available,” Marquez said.

The portable charging oasis will be sent over to the University of Puerto Rico at Humacao.

Aside from championing peace engineering, Santiago also has a personal connection to the project since she herself is Puerto Rican and has experienced first-hand the destruction a hurricane or a tornado leave behind. At the age of 10 her house flooded and everything was lost. The only thing left behind, was the house itself because it was made of reinforced concrete, Santiago said.

“That was my first lesson in civil engineering. Also, that’s when I missed and understood the small luxuries of my life like a clean floor, clean water, clean clothes, clean shoes and electricity,” she said. “My father and sister still live in the same house I grew up in. I have other close relatives and friends in Puerto Rico. It has become a grim reality for them to often have recurrent power outages and or water supply interruptions.”

“During our orientation week, (Santiago) showed us this project, which helped us understand the mission and goal of peace engineering and how using our engineering skills to provide a sustainable solution in areas of need can make a difference,” said Aibhlin Esparza, a mechanical engineering student at UTEP. “Although I didn’t contribute to the project, it did open the door for me to explore peace engineering and think of bigger ways to help other countries and communities with my skills.”

“There is a new global need to make the social and economic impact of engineering projects an integral part of our work to benefit communities within those ‘hard places,’” Santiago said. “As engineers, we have an ethical responsibility to worry about what results, expected or unexpected, occur from our projects including how they affect a community after design and construction.”

In late 2017, Puerto Rico’s main distribution network of power was destroyed by Hurricane Maria causing a blackout throughout the entire island. Like Santiago said, this lack of power in the island was deadly in itself. This year, the eye of Hurricane Dorian just missed Puerto Rico, according to BBC News.

Bryan Mena may be reached at [email protected]utep.edu