Khalid presents ‘A Night for SunCity’ 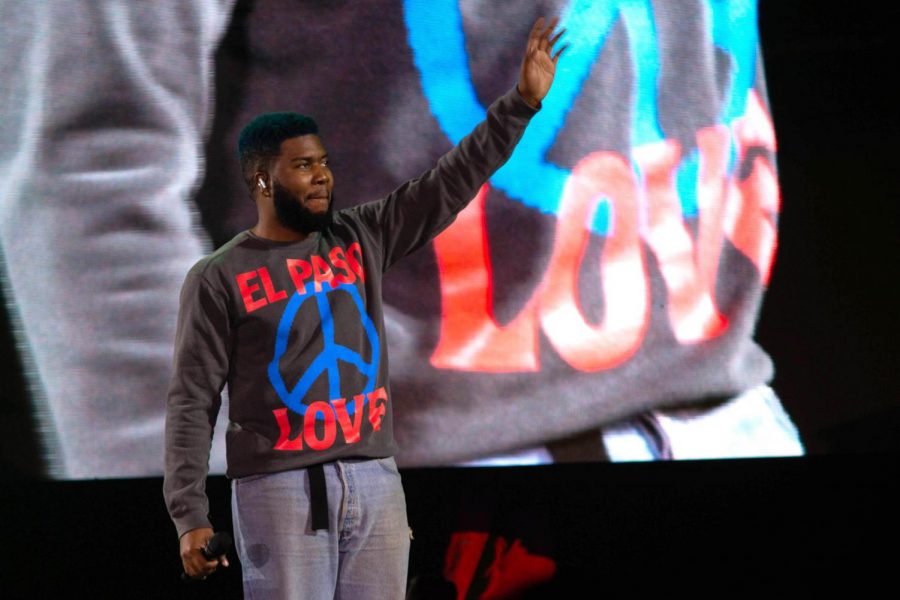 Khalid greets the crowd on his concert made to benefit El Paso shooting victims at the Don Haskins Center Sunday Sept. 1, 2019.

The Khalid Foundation and Right Hand Foundation hosted “A Night for SunCity,” a benefit concert at El Paso on Sunday, Sept. 1, to help support the families of the 22 victims who were killed during the city’s recent mass shooting at the Cielo Vista Walmart.

“I’m sending you guys my love. It breaks my heart,” Khalid told a sold-out arena at the Don Haskins Center, who gathered to celebrate the city of El Paso and honor the victims of the Aug. 3 domestic terrorist attack.

As initially promised by the R&B singer, he was joined by various friends throughout the night including movie star Mathew McConaughey, presidential candidate Beto O’Rourke and performers such as Lil’ Yachty, SZA and Rae Sremmurd.

The concert began with McConaughey and O’Rourke as they addressed the incident.

“What we are seeing here tonight says everything that you need to know about El Paso,” O’Rourke said.“Thousands of us coming together for one another, for El Paso, for Ciudad Juarez, Chihuahua, Mexico, for the families who lost someone or the families who still have someone pulling through tonight.”

The concert featured many of the Americas High School graduate’s hit songs, including his song titled SunCity, which pays homage to his love for his hometown.

“I have been rocked to the core by the horrific act of gun violence that came to El Paso and by the continued acts of senseless violence that our country faces daily,” Khalid said in a statement back in August, when he first announced the concert of which all the proceeds will go to the El Paso Shooting Victims’ Fund and the El Paso Community Foundation. “I want to give back to my community of El Paso, the city of the 915, who has given so much to me. Please come out and let’s heal together through music while raising money to help those who need it.”

Fans waiting outside the venue said they were delighted when they heard Khalid was hosting a benefit concert in honor of the victims but were not surprised, as being there for one another is just El Paso’s way of doing things.

“Here, we are all a huge family, even if we don’t know each other,” said Danielle Leydon, 15, a Loretto Academy student.

Families also attended the event and praised Khalid for using his platform to convey an important message, one they hope their kids carry with them.

“My son said, ‘He’s just doing this for all of us to feel happy’ … I think it’s good that we have somebody like that and so many others that are from El Paso that have a voice,” said Sandi Brackeen, 37, who was accompanied by her husband and their two elementary school children.

“He does have a young following, which is really cool for these kids to kind of know about respect and respect for each other,” said her husband Chris Brackbeen, 37.

The night came to an end with Khalid extending his condolences to the city.