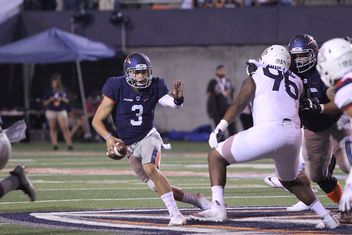 Junior quarterback Mark Torrez will look to earn playing time this season for the Miners.

Hometown product and junior quarterback Mark Torrez of Eastwood High School only appeared in one game last season, but did gain extensive experience as a redshirt freshman.

During his freshman year, Torrez played in seven games, completing 14 of 48 passes for 126 yards with no passing touchdowns and two interceptions. Torrez played a significant role in games versus New Mexico State and the University of Arizona scoring a rushing touchdown against the Wildcats, but both games ending up being lopsided losses.

As a two-star recruit out of Eastwood, Torrez had one offer from a major school ― UTEP. Torrez was a star at Eastwood and accounted for 56 total touchdowns his senior season with 41 passing and 15 rushing. After throwing for 3,837 yards and rushing for 1,026 yards, Torres was named District 1-6A Offensive MVP, while also being named first team  all-district offense.

“Mark Torrez has a lot of talent; you saw him create things when things weren’t there,” Kugler said in a post-game interview versus Arizona in 2017.

With Kai Locksley suspended, Torrez is the only other UTEP quarterback on the roster that has taken a snap with this team, and is the longest-tenured quarterback. Even with senior quarterback Brandon Jones as the likely starter, Torrez will have opportunities to earn his spot on the gridiron in a wide-open field of quarterbacks.