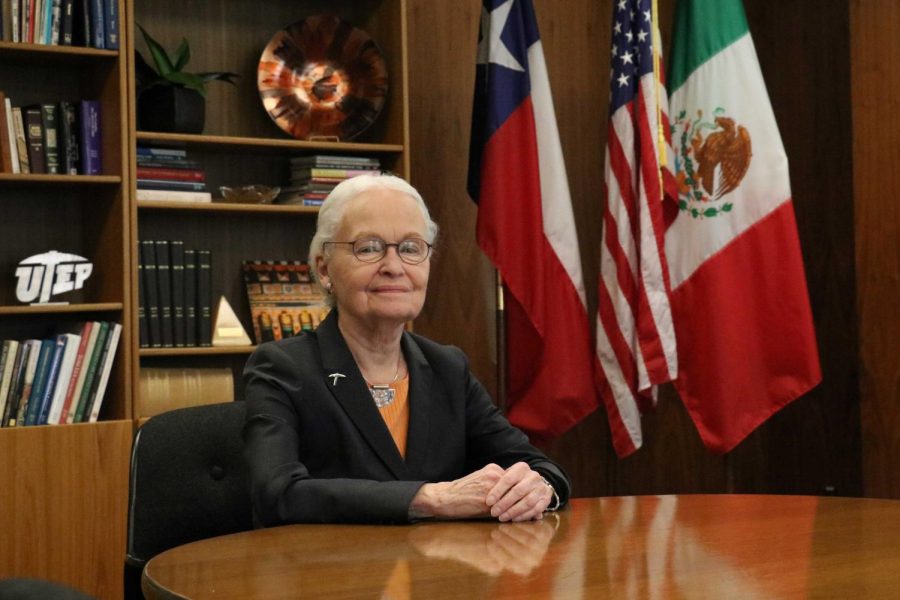 UTEP President Dr. Diana Natalicio announced her retirement from the university May 22 2018.

It’s a common word used by the community to describe UTEP President Dr. Diana Natalicio, who has played an extremely impactful role in the UTEP, El Paso and Cd. Juárez communities for decades. Her efforts to achieve access and excellence for all students has become a staple in the mission of the university.

“I just think that, you know, we shouldn’t say anyone is irreplaceable. I think what we should say is that we hope that the values will be the same,” Natalicio told The Prospector in an interview in late March.

She walked into the president’s conference room on the fifth floor of the administration building sporting a black blazer with a pickax pin, a bright orange shirt underneath and of course, her classic pinned up bun.

“There’s never really a good time,” Natalicio said when asked why she decided to retire. “I was trying to find a logical stopping point and 30, it’s a round number, right,” she joked. “I mean, I don’t know. For me, 30 just sounded right.”

She had just returned from a collaborative event at Socorro High School put on by UTEP, El Paso Community College and the Socorro Independent School District to encourage high school seniors to go to college­—a “one-stop shop” for students as university officials helped them through the application process. That event is just one of the many community outreach efforts that Natalicio has helped implement over the decades.

Natalicio described the event as a way to promote a sense of ease for students, and reduce stress for high school seniors enrolling in college.

“The fear of failure is the thing that I think we need to try to help students (by saying), ‘You can do this. You’ve already demonstrated you can do it by succeeding in high school,’” she said.

Natalicio’s passion for education came after she graduated high school.

“My own personal experience was really the driving force because I went to a very mediocre, unambitious high school,” she said.

“When I finished high school, I went out like all my fellow graduates and got a job. I mean, that’s what we did. So, I was working at a large manufacturing company as a receptionist and switchboard operator,” she said.

There she learned how to plug in and change the cables swiftly to connect telephone calls. Within the first month of doing so, something felt off.

“I looked at that switchboard. And I realized I can’t live my life just be swallowed up by this by this box,” Natalicio said.

A scared 17-year-old girl who had never left her neighborhood did something out of her comfort zone. She walked into St. Louis University, a private Jesuit college, and asked how she could enroll.

“They knew from the high school’s name and reputation that it wasn’t very strong so they told me, ‘Look, you can come, but you’re going to really have to work hard; you’re going to have to really catch up,’” Natalicio recalled.

So she did. Natalicio took classes in the morning, walked to work after class and studied on the bus on her way home. Her collegiate journey taught her the importance of a higher education and why students, like the ones at Socorro High School she had spoken to earlier that day, need to realize that.

“I really understand how important it is not to get into the trap of not going to college and telling yourself ‘I’ll go later’ because it doesn’t happen, seldom happens,” Natalicio said. “And sort to trying to grapple with the fact that you’re going to have to step up your game, you’re gonna have to do this, if you want a different kind of life.”

The idea of having a better and different life for herself resulted in several personal achievements. During her time at SLU, she became a part of the honors program which eventually opened the doors to a fellowship that sent her to Brazil­—a trip she said changed her life.

“I was on my own. I’d never been on an airplane. I’d never traveled anywhere, really. I was kind of transformed,” Natalicio said.

It also gave her the opportunity to connect with the then-chairman of the languages department of the University of Texas at Austin. She became a teaching assistant and earned a master’s degree in Portuguese and a doctorate in linguistics from the university.

From professor to president

Natalicio arrived at UTEP to become a visiting assistant professor. She said she wanted to try out the job and the university for one year, but one year turned into 45. Natalicio fell in love with the city and all it had to offer, including the drive and motivation many UTEP students have. She went on to become professor of linguistics, chair of the modern languages department, dean of liberal arts, and vice president for academic affairs.

Natalicio said the process to become president is much different today, but becoming president was never really a goal of hers until she realized her plans could change if she didn’t. Natalicio was three years in to her five-year plan as provost when she applied for the position.

“As the process began to develop, I began to understand that if I didn’t get the job as president, I wasn’t going to get to do my agenda anyway. So, I might as well throw my hat in the ring,” Natalicio said.

After several interviews, Natalicio—the only woman out of five finalists—was selected to become president in 1988. During her 30-year tenure, the university has worked tirelessly to provide access and excellence for all UTEP students.

“Thirty years is enough time to get something like that done because executing a strategic plan takes time,” Natalicio said.

When her tenure year began, Natalicio said one of the challenges she faced in order to provide access was getting the student demographics to mirror El Paso’s demographics.

“I mean (UTEP is) a public university. You have a public mandate. You’ve got to do that,” Natalicio said. “So, that’s one of the things we set out to do and not without resistance from a lot of people who kept telling us ‘you’re going to have to lower standards.’ I told them ‘no, we’re going to raise standards.’”

She added that in order to create access for students, UTEP needed to be able to do it well in order to give students access to the highest quality degree they need to compete with other people out in the world.

Natalicio said the excellence aspect of the university’s mission has taken a bit more time in order to provide students, faculty and staff with better resources. During her final year of her tenure, UTEP was able to obtain a national top tier ranking. UTEP’s charted course and its mission, led by Natalicio, has become a model for other universities.

“You’ve just got to do both access and excellence, because too many students don’t have any other options. We have to give them the best education we can, so that this college investment, this big bet that they made on themselves, is going to pay rich dividends,” Natalicio said.

Looking to the future

The UT Board of Regents unanimously selected Dr. Heather Wilson, U.S. Secretary of the Air Force, as Dr. Natalicio’s successor, on April 2.

Natalicio said the most important advice she can give is to get to know and understand the UTEP students.

“I think the hard part will be somebody coming in new, and not having that kind of ecosystem understanding, and having to develop it quickly in order to be successful,” Natalicio said. “Because here, the surrounding area, and the people who live in it, are really important factors. … Our role here is to educate the people who are here.”

In March 2018, The Prospector spoke to Natalicio as she celebrated her 30th year as president. She said at the time she had a long list of things she wanted to accomplish before she retired. When asked about that list and what has been checked off, she simply said “many things,” but she’s also added to it, too.

Natalicio said it will be difficult to downsize as she is preparing to move out of the Hoover House.

“I have a lot of work to do at home, because I’ve accumulated so much,” she said. “I’m going to have to get a little faster at it. Because my pace is too slow, I wouldn’t be able to move for at least five years if I stay at this pace.”

She plans on traveling, she said. She will visit Portugal this summer, a place where she said she feels “in her element” and once called home for a year and a half.

“I love Portugal, it’s a place where I feel tall. Portuguese are fairly short and that’s always reassuring,” Natalicio said.

While she may be stepping out of the administration building and the Hoover House, Natalicio will still call El Paso her home. She said she will still be cheering the university on and offer her opinions “if anybody wants them.”

It’s hard not to call Dr. Diana Natalicio—a woman who saw the university’s potential and pushed students to achieve their goals just as she did—irreplaceable. But, we won’t say she’s irreplaceable. Instead, we’ll say she’s one of a kind. We’ll say she has definitely impacted the lives of many people within the UTEP community, and that will forever be cherished.