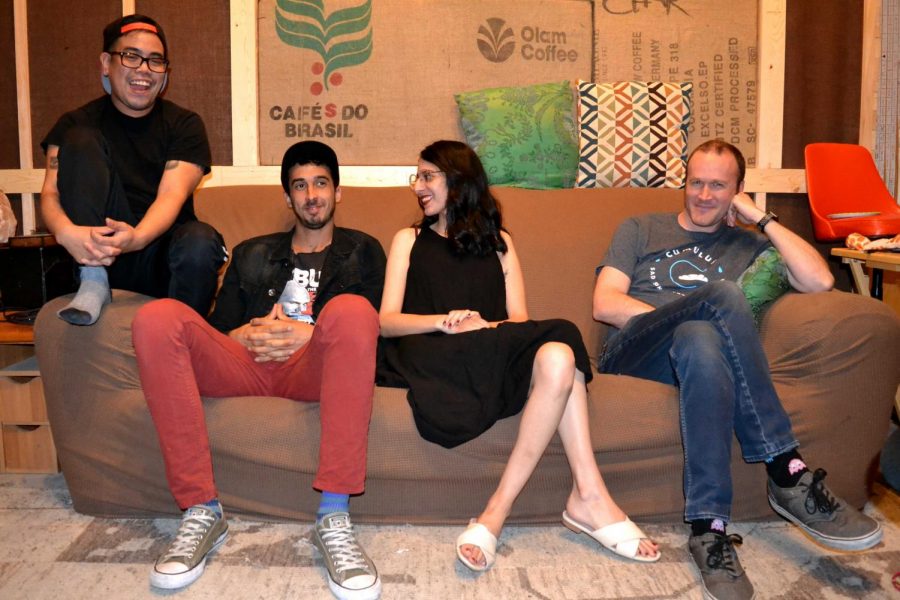 Pet People is set to perform on May 26 in Downtown El Paso.

Local art-pop band Pet People is set to perform at the ninth annual Neon Desert Music Festival 2019 on May 26 in Downtown El Paso.

“(Our name is) Pet People because we love pets and we love to pet people,” said Simsuangco jokingly, while Bo and Honey (studio pet dogs) sniffed and scratched the door during an interview with The Prospector at the band’s recording studio at Brainville.

Velarde played solo for a while before deciding to form a band. The bandmates met through local shows and began working together and writing music in January 2017, months before playing their first show at El Paso’s local venue, Neon Rose, the following summer.

“We found that we worked together really well and had common musical goals,” Ingram said.

Pet People works together in making their music. All songs are written collaboratively as the band expands on one another’s ideas and concepts. Velarde focuses more on the lyrical content, and she said the band is inspired by human experiences.

“The challenges of being human, insecurities, outside judgments,” Ingram said. “Whatever is happening at the moment. Our music is always changing. The process changes, and over time our music is going to be different because we are different people every day.”

Along with life responsibilities, the band carries on with their own personal lives knowing that finding time and logistics is often the hardest challenge for the group.

“We are relatively ambitious about making our music. We really want to make sure that everything is perfect and the way we want it. So we put a lot of work in it and that takes a lot of time,” the band said.

Pet People has performed at local venues all over El Paso such as Monarch, Love Buzz, the Lowbrow Palace and Neon Rose, as well as outside shows throughout Texas during a short tour through South by Southwest in Austin, San Antonio and Denton. The band has also played in the borderland’s sister cities, Las Cruces, New Mexico and Cd. Juárez, Mexico.

For information about Pet People visit them on Facebook @PetPeopleMusic and listen to their debut double A-side single on Spotify. Visit petpeople.bandcamp.com.

Neon Desert Music Festival will be held May 25 and 26 in Downtown El Paso. To purchase tickets or for more information about the event, visit neondesertmusicfestival.com.