Miners take on Florida International with tournament opportunity in reach 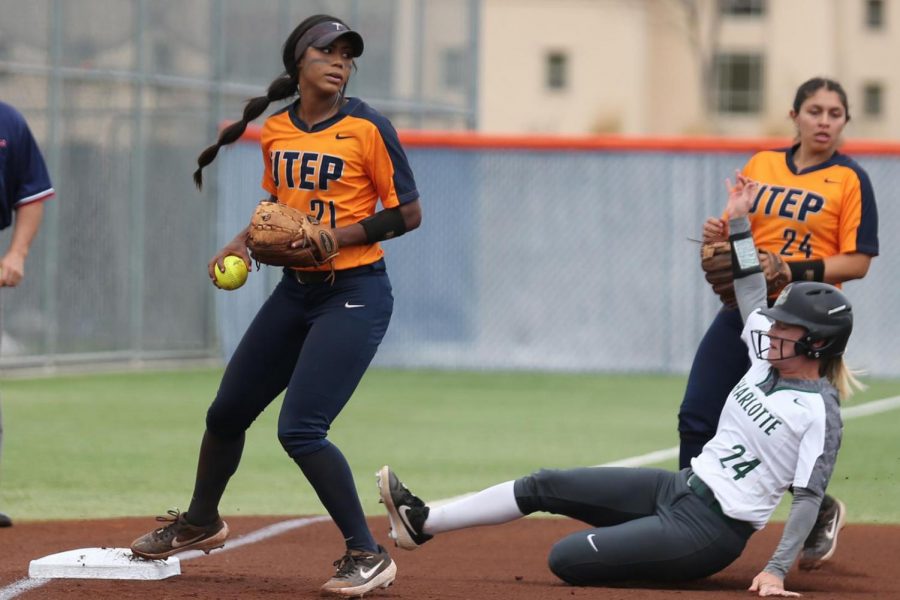 After losing two of three games to the University of Texas at San Antonio this weekend, the UTEP Miners softball team (15-31, 8-13 in C-USA) fell to fifth place in the Conference-USA West division.  The top three teams in each division make the conference tournament, along with the two remaining teams with the best conference record. With tiebreakers considered, the Miners need to win only one out of the three games versus Florida International University this weekend in their regular season series finale to be wild card eligible.

The Miners own a 7-0 record versus FIU since they have been in C-USA, and the Miners have not lost three games of a home series since 2016 against University of Alabama Birmingham.

The Miners had a promising start, winning the first of three games against UTSA, but in the following two games the bats went silent, with eight hits combined and no runs scored. Pitching also took a backward step reverting to the lack of control that has plagued them most of the season with 23 walks in 17 innings pitched. The Miners lost the last two games of the series by a 19-0 margin.

The Florida International University Panthers (25-23, 6-14)  have the worst batting average in the conference at .232. The best hitter for the Panthers is senior left fielder Natalie Orcutt who is batting .299 with three home runs and 25 runs batted in. Senior center fielder Jackie Schoff leads the Panthers in batting average at .327, and junior shortstop, Jessica Rivera leads the team in home runs with five.

For the Miners, pitching, which was turning around before this weekend’s games, has been their weakness for most of the season. The Miners are ranked last in the conference in earned run average at 7.15 and have 123 more walks than any other team in the conference at 297.

Nationally, the Miners earned run average ranks them 290 among all Division I teams as they lead the nation in walks.

Senior pitchers, Julia Wright, (9-13) with a 6.40 earned run average, and Kira Mckechnie, (5-13) with a 5.71 average, have both struggled with control all season, ranking first and second in the conference topping more than a hundred walks each.

Both pitchers have had some great performances infrequently this season. Wright dominated the previous weekend with only one walk, and no runs were given up in 10 innings versus Florida Atlantic University, and Mckechnie had a 12 strikeout game at New Mexico University.

UTEP ranks sixth in batting with a .283 average and second in home runs with 44.  Senior first baseman Kacey Duffield has been the Miners best player on the field with her bat and glove standing out.

Duffield’s .394 batting average is third in the conference, to go with ten home runs and 27 runs batted in for the Miners.

The Miners control their destiny by avoiding a series sweep loss to the Panthers impeding them from making the conference tournament starting May 8 in Birmingham, Alabama. The Miners have been a much better team at home with a 7-4 record and are facing an FIU team far removed from their NCAA tournament team of 2017 that went 46-15 overall.