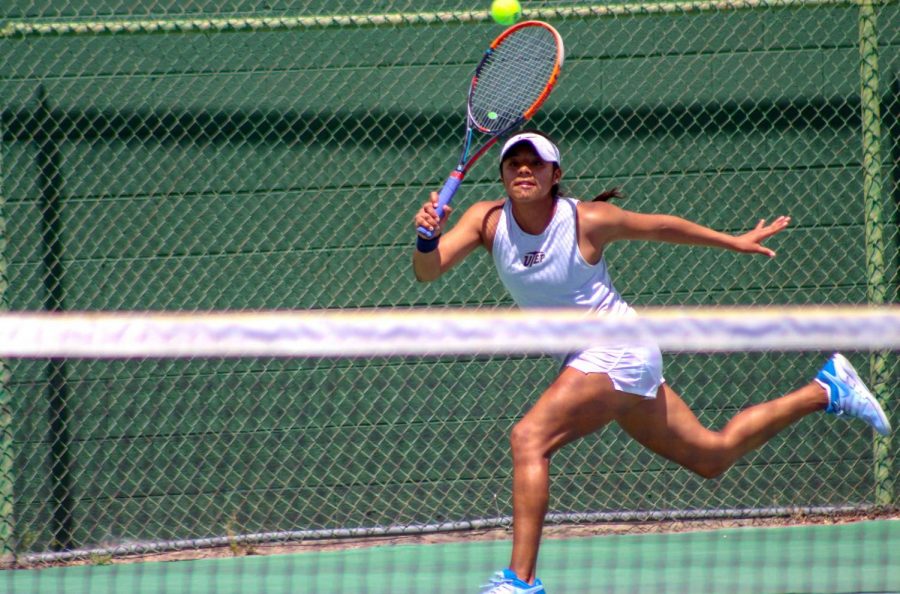 The UTEP tennis team (7-12) will seek to continue its winning streak against I-10 rival New Mexico State (11-8) Saturday, April 13. The Miners won its last three games and have been dominant at home with a 5-1 record, but have found little success on the road or at neutral sites with a road record of 2-11.

The Miners will be led in singles by freshman Kirsten Prelle, who has been the standout of the team with a 20-8 overall record in singles. Prelle is from Edmonton, Alberta, Canada and was the 2016 junior national Canadian champion in doubles. She is also a part of the top doubles pairing for the Miners along with junior Vanessa Valdez. Together the pair has compiled a 10-3 record and are the top duo in Conference USA this season winning its last five matches.

Sophomore Erandi Martinez has won two matches in a row and has upped her season record to 11-16 which is second to Prelle for wins on the team. Martinez was named the Steve Hoy UTEP Athlete of the Week for her back-to-back wins in singles play and picked up a win in doubles play with freshman Rine Nozaki. Nozaki and Martinez would defeat freshman Ana Zaiden and senior Lauren Kuhn.

Freshman Kathleen Percegona of Curitiba, Parana, Brazil has struggled this season with a record of 5-11. As the former top-ranked under 18 player in Brazil, she has shown promise and is currently number two in the tennis rotation.

New Mexico State’s top player this season has been sophomore transfer Harsha Salla (17-11) who is also part of their number one doubles team (5-9). Salla is teamed with sophomore Gavi Kalaga who is 14-10 in singles play. In her previous meeting against UTEP at the New Mexico State Invitational final, she topped Prelle/Valdez in a hotly contested 3-6, 6-4, 10-5 victory with senior Lindsay Hallas (8-8) as her partner. The Miners also claimed third place in the invitational with a victory by Martinez and freshman Rine Nozaki over the Aggie tandem of Chloe Gavino/Nadia Justiniano 6-4,6-3. The Martinez/Nozaki tandem are 8-14 on the season.

Kirsten Prelle will again face New Mexico State senior Rebecca Keijzerwaard (7-14) who she previously dominated 6-2,6-0 at the Invitational semifinal. Prelle and Valdez will most likely face a duo of Salla and sophomore Gavi Kalaga who are 5-9 in doubles play.

The match will begin at 2 p.m. at the El Paso Tennis Club and will be the Miners last match before the Conference-USA championships in Houston.