The good, the bad and the optimism : UTEP men’s basketball 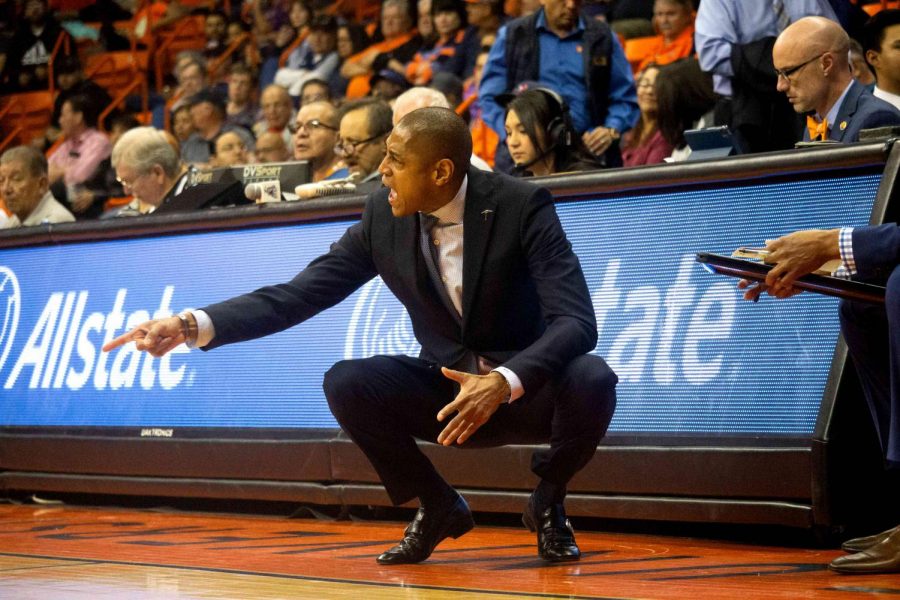 Rodney Terry and the Miners finished the season with their closest road loss of the year at Middle Tennessee State losing by a single point, capping off the season winless on the road 0-13. Their conference record of 3-15 is the worst in  UTEP’s history in Conference-USA play, and the first time they have missed a conference tournament since Don Haskins was head coach during the ‘97-’98 season.  This is the Miners worst record (8-21) since the Billie Gillispie led 2002-2003 Miners went 6-24 (3-15).

Coach Terry inherited a team that in the end only returned three players due to graduation and transfers. Isiah Osbourne, Titus Smith and Trey Wade left the team at the end of last season. Tim Floyd’s final season was a tumultuous season which left the cupboard bare with players wanting out of the program.

The three returning players were sophomore guards Evan Gilyard and Kobe Magee, and lone senior Paul Thomas. Terry brought in freshman guard and four-star recruit Jordan Lathon, freshman forward and three-star Efe Odigie, and freshman guard Nigel Hawkins to start the young foundation. Lathon was the most heralded recruit to be on the Miners roster as a freshman since Twymond Howard who was a four-star recruit for the 2012-2013 UTEP team.

The Miners began the year with three freshmen, a sophomore and a lone senior starting. All the underclassmen scored in double figures for the season with Terry playing a very short bench of only three players for the most part. Point guard Evan Gilyard led the team in scoring with a 13.6 average but suffered greatly from the field shooting just 37.5 percent.

The most pleasant surprise of the season was Odigie who averaged a double-double for the year and lead Conference-USA in rebounding with 10.1 per game; he was the second UTEP player to lead the conference in rebounding since they joined C-USA. The last player to accomplish this feat was Vince Hunter as a sophomore in the 2014-2015 season who averaged 9.2 rebounds a game. Odigie was also named to the Conference-USA all-freshman first team.

Odigie missed the final four games of the season with an ankle issue, and his rebounding was sorely missed.

Lathon the highly touted guard out of Grandview Missouri started the season quite erratically but came into his own against one of the Miners top opponents Marquette (23-8) scoring 26 points. Lathon averaged 18.5 points per game in group play that consisted of the last four games.

Hawkins the other freshman starter averaged 12.6 points and grabbed four rebounds a game. Hawkins was highly recruited out of Cypress Fall High School in Houston, Texas and was ranked as the 15th best player in the state.

Paul Thomas averaged a respectable 7.7 points a game and grabbed 5.2 boards a game. Down the stretch, Thomas became one of the better three-point shooters on the team finishing third in percentage at .340.

Next season all of these underclassmen will have a year of starting under their belt and will be joined by a significant group of transfers. Junior forward Bryson Williams will follow his former coach from Fresno State in Terry along with his 13.8 points per game and 6.1 rebounds per game. A former four-star recruit, forward Kaden Archie has transferred from TCU, and was ranked as a top 100 player by Rivals.  Souley Boum is a 6 foot 3 shooting guard from the University of San Francisco averaged 10.9 points a game for the Dons. Sophomore forward Tyler Verhoeven out of Duquesne and junior forward Anthony Tarke round out the incoming transfers

There should be good cause for optimism with the influx of transfers that have played Division I college basketball, and the current underclassmen that played significant minutes this season.

Coach Terry has experienced turning a team around as he made Fresno State one of the best in the  Mountain West, and one lesson that can be learned from Gillispie season from 2002 is that it all can change in one season. The next year the Miners were in the NCAA tournament with a 24-8 record. With the experience and talent on the current roster, UTEP’s future looks bright and promising.