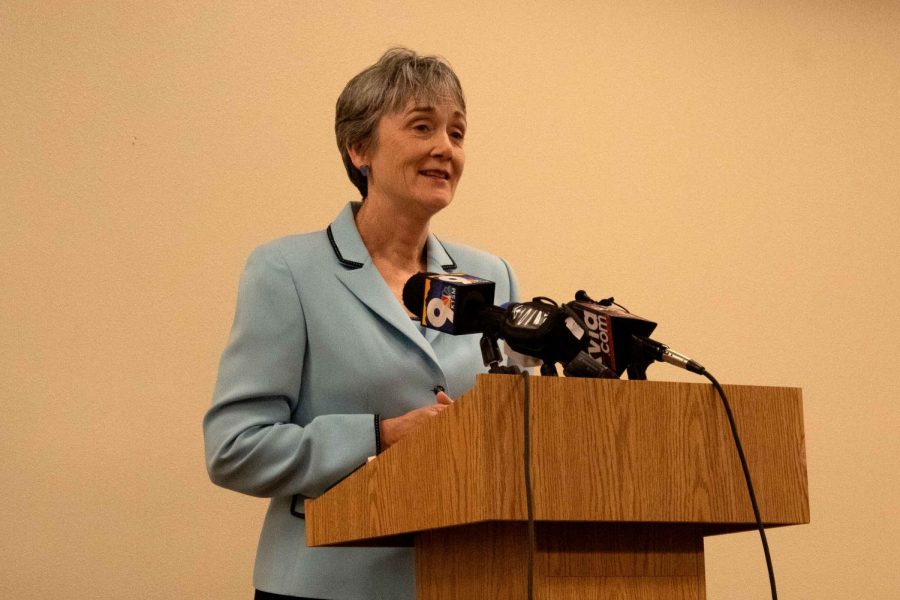 Dr. Heather Wilson, U.S. Secretary of the Air Force and sole finalist for UTEP presidency, visited the UTEP campus and addressed the media on Monday, March 11.

The UT System Board of Regents unanimously selected Secretary of the U.S. Air Force Dr. Heather Wilson as the sole finalist for the position of UTEP president Friday, March 8.

Over the weekend, Wilson traveled to El Paso and met with Mayor Dee Margo, UT System legislators, Regent Paul Foster and Dr. Natalicio. Wilson visited UTEP Monday, March 11, to speak with faculty and staff and addressed the media during a press conference.

“It’s clear from everyone I’ve met, this is a welcoming and wonderful community deeply proud of this university and proud of this community, and I look forward to engaging more,” Wilson said.

Wilson will succeed current UTEP President Dr. Diana Natalicio, who announced her retirement in 2018. The regents must wait a state-required 21 days before they can vote to appoint Wilson as president.

Wilson oversees 685,000 active-duty, National Guard, Reserve and civilian forces, as Secretary of the Air Force. According to Reuters, Wilson submitted a resignation from her position over the weekend and plans to step down May 31. President Donald Trump congratulated Wilson on her new position via Twitter.

During Monday’s press conference, Wilson took questions, some concerning backlash she is facing based on her past voting record and political ties.

Some voiced concern about Wilson’s ties to the Trump administration.

Another concern voiced before and during the press conference was Wilson’s political past as a former New Mexico congresswoman. A petition began circulating over the weekend asking the UT Board of Regents to reconsider Wilson as the sole finalist due to a history of voting against funding for the LGBTQ community and black and Hispanic colleges.

“My general approach with respect to LGBT issues is to treat everyone with dignity and respect and I think that’s what a leader should do with everyone,” she said.

She tackled questions about voting against funding black and Hispanic serving colleges by encouraging people to dig a little deeper and realize that legislators have to consider an entire piece of legislation to vote, not just parts of it. She cited an example where it was claimed she did not support Pell Grants.

“I’ve always supported Pell Grants and then I dug into what the vote was that someone was characterizing,” she said. “I went back and looked at the congressional records and it was a substitute amendment for an entire authorization act on a higher education act. And yes, I did vote against that substitute because it would have dropped the amount of the Pell Grant from $6,000 to $5,800 per person. That matters a lot. There was something else in that entire piece of legislation that somebody else thought should have been supported, then there were arguments for and against. In the end, that was an important decision. I absolutely support Pell Grants and I opposed cutting the level of pell grants to individual students.”

She said she is willing to engage with students and hear their concerns.

“I think it’s important to get to know people and to answer questions, engage with them,” Wilson said.

Wilson is the former president of the South Dakota School of Mines and Technology, an engineering and science research university. She served as president from 2013 to 2017.

In 2018, Natalicio stated she would like to see her successor continue a commitment to access to higher education, particularly with low-income and underrepresented students.

“Everybody focuses a lot on excellence. Everybody wants to be prestigious. Everybody wants to rank high, but there’s not a lot of focus on access, which is creating opportunities to people who wouldn’t otherwise have them,” Natalicio said in 2018. “And I think that public higher education is extraordinarily important because all the data show that low-income students don’t have access to higher education anymore.”

Wilson said that because of UTEP’s stance on access and excellence and its ability to do both for students, the university is a true example of what higher education in America should be. She said its mission of access and excellence played a role in her interest to take on the responsibility of becoming UTEP’s next president, if appointed.

“I think the people who want to define universities as having to choose either access or excellence create a false choice,” Wilson said. “… UTEP doesn’t buy into that and it has shown that access and excellence go hand in hand.”

Wilson stated she knows she has “big pumps to fill” if selected to take over Dr. Natalicio’s position.

“There are universities around the country that are in crisis, one reason or another…this is not one of those (universities),” Wilson said. “I think it’s important for me to spend time listening and understanding and then engaging with the faculty, staff and students about ‘it’s as good as it’s ever been, and how do we get even better?”

Wilson is expected to meeting with faculty, staff, and students in the upcoming weeks.