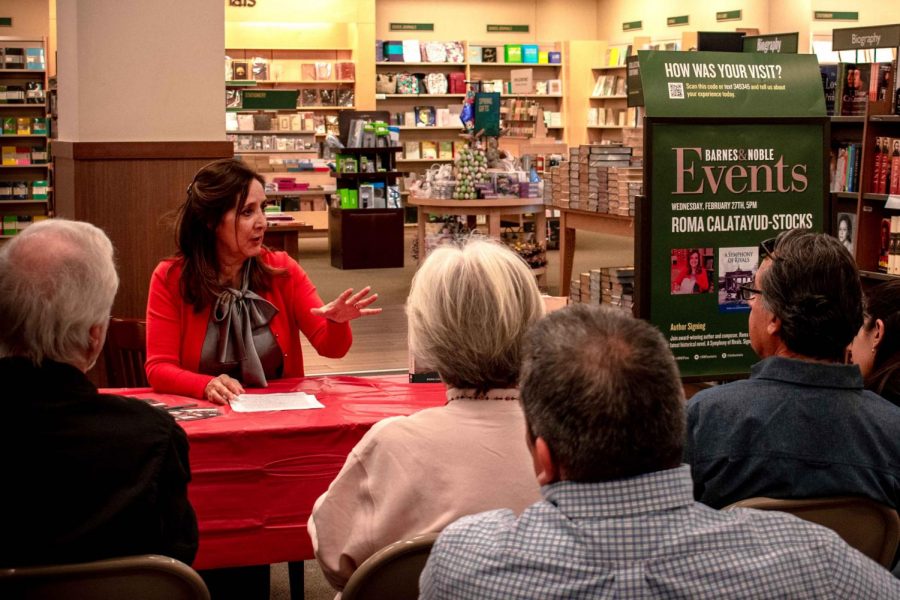 Roma Calatayud-Stocks, an author from Mexico City, spoke about her second installment of her book trilogy, “A Symphony of Rivals,” which focuses on life in the 20th century overseas in Austria, Italy, Germany and the U.S., Feb. 27 at Barnes and Noble at the Fountains at Farah.

“A Symphony of Rivals” is set in the 1930s in Germany, Austria, Italy, and the United States in the years leading up to World War II. It follows the lead character Alejandra, where the arts and culture have been taken over by a new administration in Germany.

The character Alejandra, named after a Mexican waltz by Enrique Mora, stays present throughout the book series and is bicultural with a Mexican nationality. Many of the other characters in Calatayud-Stocks’ books are multicultural as well.

“I guess that’s a very conscientious choice, to be able to decide what parts of the world I want to go to,” Calatayud-Stocks said.

Calatayud-Stocks explained she puts more of her personal experiences in the first book,  drawing from her life, even though the book is not autobiographical. She seeks to engage readers and thus believes that going beyond her own experiences will help do so.

The first book, “A Song In My Heart” included a CD with music composed to go along with each chapter in the story. The music that was chosen was historically significant and plays a central role with the characters.

She includes many genres of music in her storytelling with two of her own songs along with different composers from several countries.

Calatayud-Stocks said the arts have been present in her life since she was a little girl, and it’s important for her to display how music and the arts transcend time and societies and create bridges among people.

“It was not until I combined both the music and the literature and the writing in 2002 that those things really came together,” Calatayud-Stocks said.

Calatayud-Stocks explains how Beethoven’s music plays a big role in the main character’s life as an inspiration.

“Beethoven’s Legacy plays as a moral compass that contrasts against fascism,” Calatayud-Stocks said.

Calatayud-Stocks is currently writing the last installment of her trilogy “Ode to Joy”. Her first two books can be found at Barnes And Noble, on Amazon, or as e-book downloads.

Calatayud-Stocks said she has been considering turning her novels into films in the future.