Bhutan Cultural Exhibit tells many stories through its art 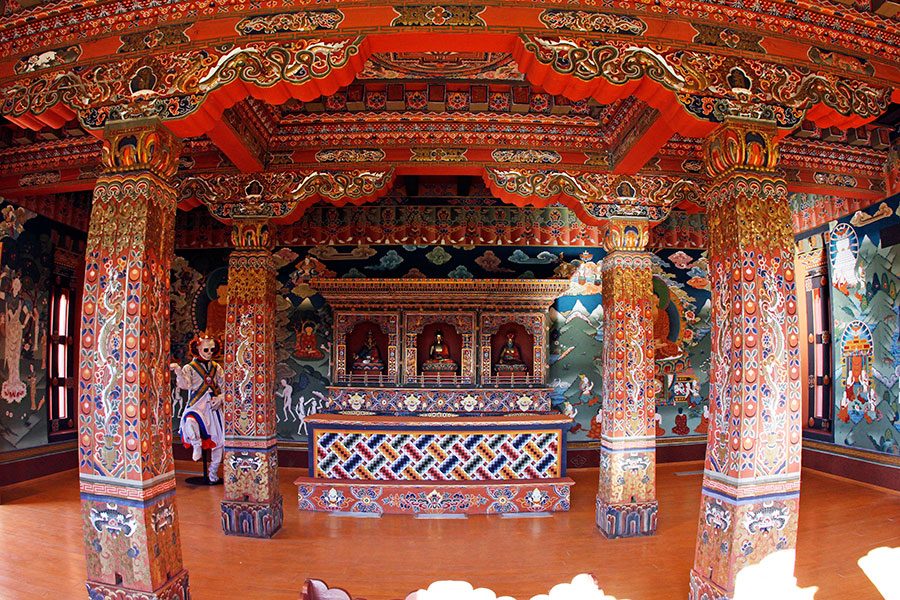 Along the U.S.-Mexico border, at the heart of UTEP’s campus in Centennial Plaza, sits the Lhakhang Cultural Exhibit, a gift from Bhutan and the only structure of its kind found outside of small Himalayan countries.

A lhakhang is a religious structure, or temple, where religious activities take place and house sacred objects. The translation of “lhakhang” means “the house of gods” for enlightened beings such as the Buddha, his followers and other deities.

The story of UTEP’s lhakhang began in the summer of 2008 when the Smithsonian Folklife Festival in Washington, D.C., showcased the Kingdom of Bhutan. Bhutanese craftsmen, painters and other artisans constructed a true lhakhang on the National Mall. During the opening ceremonies of the Folklife Festival, His Royal Highness Jigyel Ugyen Wangchuck, Bhutanese prince, presented the lhakhang as a gift to the U.S. and to UTEP.

“We offer it as a symbol of our hopes for a future relationship, as stable, as durable and as sweet as the Himalayan pine that it is made of,” Wangchuck said at the ceremony in 2008. “We are very happy that this (lhakhang) will have a home in the beautiful and, I dare say, Bhutanese campus of The University of Texas at El Paso.”

The lhakhang was reassembled in 2015 as part of the university’s campus transformation project in conjunction with its Centennial Celebration.

“Bhutan sent about 10 artisans (to El Paso) to help reassemble the lhakang,” said Kaye Mullins, education curator for the Centennial Museum & Chihuahuan Desert Gardens. “The Bhutanese did the artwork on the walls. They did the columns in the middle, they did they statues, the altarpieces and the furniture.”

The artwork now displayed in the Lhakhang Cultural Exhibit ranges from paintings, columns, sculptures, furniture and clothing. It represents Buddhist artists from all over Bhutan who have created works to represent the country’s culture and heritage.

“They were all handcrafted by the Bhutanese. We want people to know the artwork,” Mullins said. “Not necessarily to go in to study Buddhism, that’s not the idea of it. The artwork in there is exquisite. They have covered every single thread of that canvas. Everything in there has a story, if not 17 stories.”

The Lhakhang Cultural Exhibit at The University of Texas at El Paso is open to the public from 11 a.m. to 1 p.m. every Wednesday and 1-3 p.m. the first Sunday of each month, except holidays. Mullins serves as a tour guide during these times.