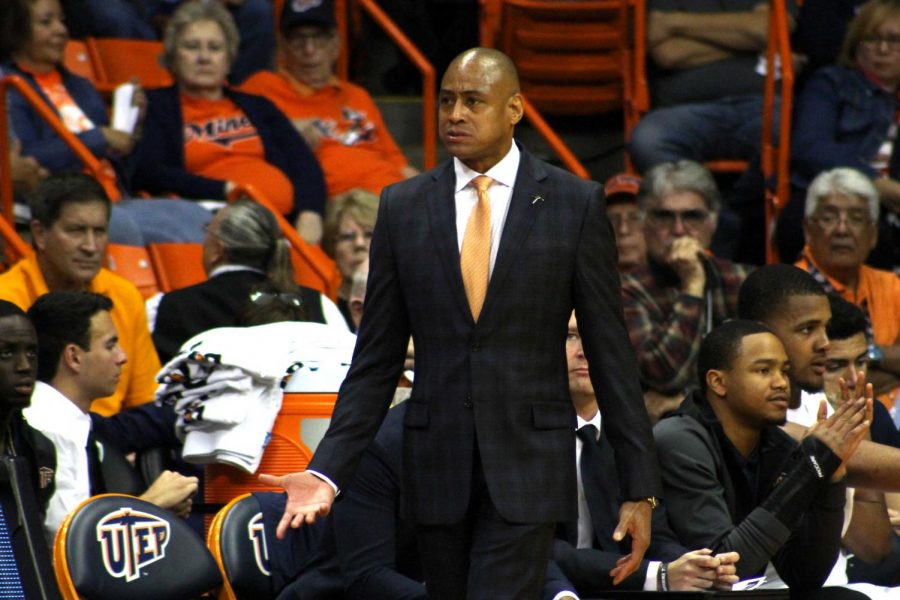 UTEP head coach Rodney Terry looks to lead his young Miner team into group play. The Miners are currently in 13th place in the Conference-USA standings.

This new format places all-conference teams by record within conference into two groups of five, and one group of four with these teams playing within their prospective groups for the final four games. UTEP is currently in 13th place with a 3-11 conference record. This seeding places them in the lowest rung of the conference groups.

The bonus play is designed to have teams play meaningful opponents that will give teams a chance to increase their RPI thus leading to a higher seeding in the NCAA tournament.

On Feb. 23, UTEP will begin bonus play against top seed in its bracket, Rice. Coming off its worst Conference USA loss of the season (77-44 at Southern Miss to former Miner coach Doc Sadler), the Miners look to bounce back against the Owls.

UTEP already owns a close home win over Rice, 65-64, in which it held Rice to 38 percent shooting from the field. The Miners need to provide more defensive pressure on graduate transfer forward Jack Williams and junior forward Robert Martin off the boards, as they both hit double digits in rebounds in their last meeting.

Rice, much like UTEP, has a balanced offense with no dominant scorer and a slightly deeper bench with eight players averaging about 20 minutes a game or more. The Miners are riding a six-game home win streak versus Rice and have not lost to the Owls at home since 2012. The Miners need to solve the shooting woes that have been plaguing them as of late, shooting 32 percent from the field their last two games.

Defensively the past two games the Miners have struggled, and allowed opponents to shoot more than 50 percent from the field while hitting on less than a third of their shots.

Freshman guards Nigel Hawkins and Jordan Lathon were effective in the previous meeting with 24 and 17 points, respectively.

Both teams shot 53.8 percent from the foul line in their previous matchup, which leaves more opportunity to put points on the board this go around.

Only the top 12 teams make the conference tournament so the Miners must win at least three out of four games to make the tournament. Winning the next four games would take any guesswork out of the process, but that would be a lot for a team that has not won back to back games all season.

After playing Rice at home, UTEP will travel to Charlotte to take on the 49ers at 2 p.m. March 3 in Charlotte, North Carolina.

“We’re excited about C-USA Bonus Play and the opportunity to play two more games in front of our passionate fans,” said first-year Head Coach Rodney Terry.“They’ve been tremendous all season long, and we’re counting on their continued support as we fight to earn a spot in the C-USA Tournament.  It’s going to be a super competitive final four games and we’ve instituted ‘Bonus Prices’ for ‘Bonus Play’ in the Haskins Center, which will hopefully help us pack the arena.”