O’Rourke, Escobar and others march against the border wall 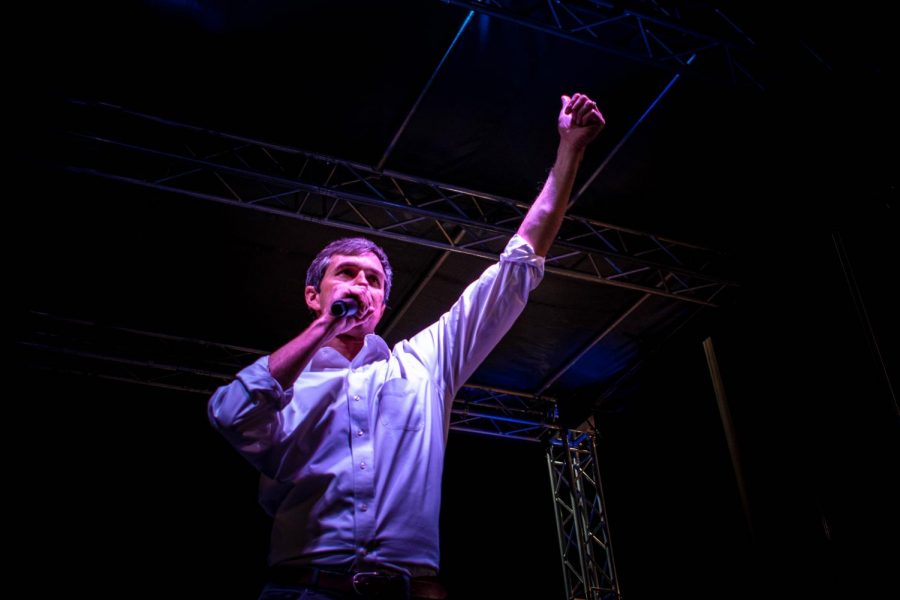 The event was just across the street – originally scheduled at the same time – from President Donald J. Trump’s “Make America Great Again” campaign rally at the El Paso County Coliseum, 4100 Paisano Drive, where the president discussed the need for a border wall and border security.

“Safe, not because of walls, but in spite of walls,” O’Rourke said. “Secure, because we treat one another with dignity and respect. That is the way we make our communities and country safe.”

Before O’Rourke spoke to his constituents, Texas’s 16th congressional district U.S. Rep. Veronica Escobar, and members of the Border Network for Human Rights, and Women’s March El Paso spoke to protesters at Bowie High School, 801 S. San Marcial St., about the president’s claims about the effectiveness of the border wall.

During his recent State of the Union speech, Trump said El Paso was a dangerous city before segments of a wall were constructed during the George W. Bush presidency after Bush signed the Secure Fence Act of 2006. The barrier now separating the two cities of Cd. Juárez and El Paso was built in 2008 and finished in mid-2009. Trump claims violent crime significantly decreased after the wall’s construction.

O’Rourke led a group of 10,000-15,000 in a march from Bowie High School to Chalio Acosta Sports Complex, where he then gave a speech about immigration that focused on El Paso and its relationships that made it the largest binational community in the western hemisphere.

“Two countries, speaking two languages, cultures and two histories, who come together (and) are joined not separated by the Rio Grande River – farming something far greater and more powerful than the sum of people or the sum of our parts,” O’Rourke said. “We have so much to give, so much to show the rest of the country, and we’re doing it right now.”

O’Rourke talked about distinguished El Pasoans such as World War I hero Marcelino Serna, who was the first Hispanic awarded the Distinguished Service Cross. He also discussed the all-Mexican unit from Segundo Barrio that fought in World War II Company E; Memo Herrera who coached the first Texas State baseball championship team with the Bowie Bears; and Thelma White who graduated from the all-black Douglas High School in El Paso. He used these examples to demonstrate how El Pasoans have faced obstacles due to injustice and racism, yet fought to take a stand – not just for them and the city of El Paso – but for the betterment of future generations.

“All of them made a stand together for El Paso, for this country, not just for themselves, not just for people who look like them, not just with the generation with whom they live,” O’Rourke said. “They did it for everyone, including those of us who stand here today, the beneficiaries of their courage and the stand that they made. That is our opportunity at this moment, with the eyes of the country upon us, all of us together are going to make our stand.”

“We make our stand here together tonight,” O’Rourke said. “That walls do not make us safer. Walls will require us to take someone’s property, their house, their farm, their ranch to build a wall at a time of record-low northbound apprehensions at a time that El Paso is not the outlier in the cities of the border. In fact, if you look at McAllen, if you look at San Diego, if you look at all points in between the U.S. cities of the U.S.-Mexico border, (they) are far safer than the U.S. cities deeper in the interior of the United States of America.”