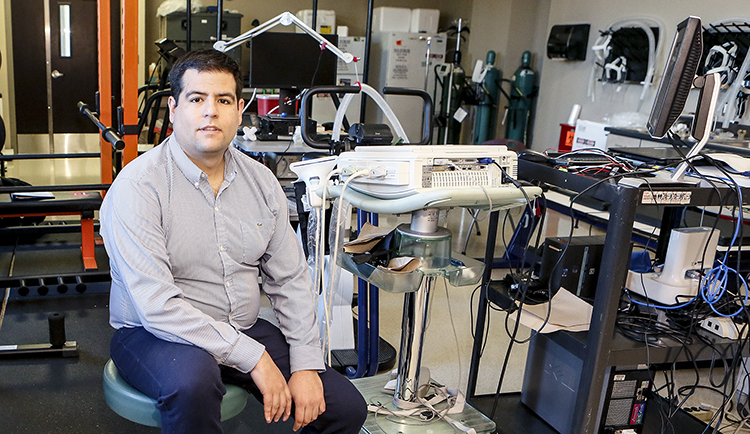 PRISM (Postdoctoral Recruitment Initiative in Sciences and Medicine) program gives graduate students an opportunity to see first-hand if a postdoctoral position at Stanford University would be right for them.

Morales-Acuña will travel to Stanford for three days, where he will tour the campus, go through a series of interviews and meet with faculty and current postdoctoral scholars.

“This is increasing my chances to pursue my personal goals of being with the top researchers of the world,” Morales-Acuña said.

The Chile native obtained a Master of Science in Sports medicine from Mayor National University in Chile in 2013. He continued his sports medicine studies over the years in Spain and the U.S.

He started his doctorate degree at Indiana State University. Two years later, his mentor received a position at UTEP and asked Morales-Acuña to come with him. He is now a part of UTEP’s Interdisciplinary Health Science (IHS) program, and is a research assistant in UTEP’s Doctor of Physical Therapy (DPT) program. His research focuses on the effects of exercise on the cardiovascular system and  the pair is looking for ways to use exercise as a prescription.

UTEP sends its students emails regarding different career opportunities on a regular basis. One day, the university sent him an email regarding the program and  according to Morales-Acuña it opened his eyes to a new opportunity.

“I wasn’t thinking about applying for a post-doc position, but Stanford is a great place to be,” Morales-Acuña said.

Morales-Acuña also works with former UTEP student, Francisco Javier Peña, who obtained a bachelor’s degree in rehabilitation science. As a lab assistant, Peña’s job is to assist Morales-Acuña in any research projects he conducts. Over the last year and a half, he has learned an abundance of information from Morales-Acuña.

“He is very knowledgeable. He’s taught me how to use the equipment, procedures and the meaning behind pretty much all of his research and how it benefits the community,” Peña said.

Even though Peña is a recent graduate, he wanted to stay in the lab to gain more experience and knowledge to prepare him for the next step in his career, which is going to physical therapy school.

Peña was also very excited to hear that his colleague was selected to be a part of the PRISM program.

“It’s something to look up to because not everybody can have a stance or a position like that. It’s pretty admirable,” Peña said.

Morales-Acuña has other options for post-doctoral positions in Spain and Chile, however, he is very excited to see if Stanford is a good match for him.