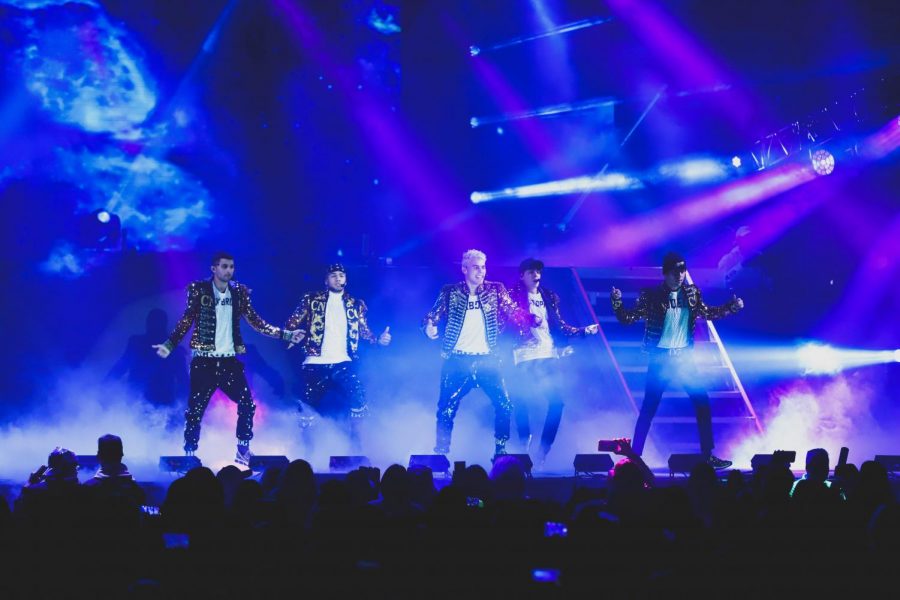 Fans, named CNCOwners, of the band arrived to the coliseum a few hours early to wait in line to be the first ones in when doors opened at 7:00 p.m. Upon entering the building fans rushed to their seats and waited for the show to begin.

A hand full of fans were lucky enough to have purchased tickets that included a special meet and greet with the band; where they chatted for a while took pictures with the boys and received autographs as well.

Concertgoers began to grow anxious as they waited for the band, and after about an hour the lights turned out and a blast of applause and cries filled the room.

Bright lights displayed the five members all standing side by side across a lifted stage under spotlights; moments later ropes appeared above the band as they clung onto them and swung down to the stage bellow.

Like most boy bands the band dazzled the crowd with a variety of matching sequin outfits that gleamed under the show lights all night.

CNCO performed their hit songs “Reggaetón Lento,” “Tán Facil,” “Mamita,” “Sólo Yo,” and many more all while dancing choreographed routines keeping the crowd excited with every move.

To extend their gratitude to their fans the boys gathered tweets that local fans had sent out to the band and read them out to the crowd to thank them for all the support.

At the end of the night Concert-goers could not get enough and chanted “otra” for the boys to continue the show. The chanting worked as the boy performed two encores. The boys finished the night spraying confetti into the crowd.

The band remains popular among teenagers and young adults ages 17-22 years old, the age range of the members themselves; however the crowd during their performance on Jan. 27 at the El Paso County Coliseum consisted of tweens who all wore CNCO merchandise.

CNCO currently has over 15 more stops on their “CNCO World Tour” for their second studio album, “CNCO.”