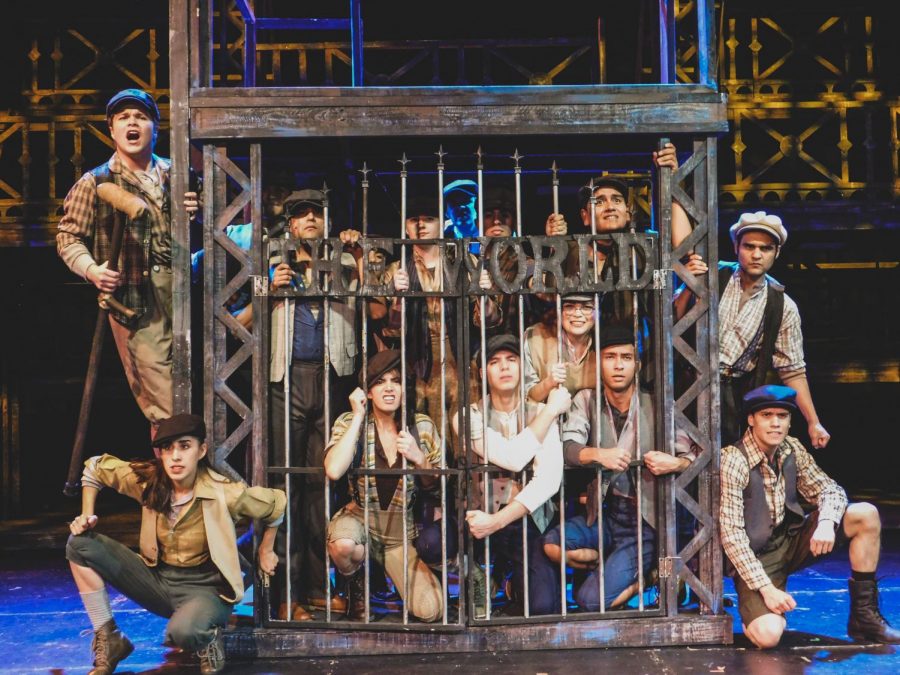 Based on the newsboys’ strike of 1899, the show is set in New York City and focuses on Jack Kelly (Derrick Cintron), a charming newsboy in charge of the “newsies,” a rag-tag team of newsboys.

When Pulitzer (Greg Thompson), a fictional publisher based on the real-life Joseph Pulitzer, raises the distribution prices at the expense of child workers, it calls the attention of Jack, who rallies newsies across the city to go on strike.

The production is based on the Disney film of the same name written by Bob Tzudiker and Noni White, a married couple who also worked on other films such as Disney’s, “Tarzan,” “102 Dalmatians,” “The Hunchback of Notre Dame” and “Anastasia.” The two approached Michael Finnell, a producer known for his work in horror-comedy films, to turn Disney’s “Newsies!” into a nonmusical drama. Next, Disney’s studio head, Jeffrey Katzenberg, redirected it into becoming a musical.

Now, under the direction of Jaime Barba, a lecturer of Theatre Arts and Dance, it has come to the UTEP Dinner Theatre to provide an entertaining experience.

Barba has directed many of the performers before, including Cintron.

Cintron told The Prospector he has worked with Barba for 15 years.

“I would not be even half the performer I am today if it wasn’t for him; he’s actually the reason I was a professional dancer prior to coming back to El Paso,” Cintron said.

Moreover, his character has numerous dancing numbers in the production, which is what influenced Cintron to pursue the role.

“Dance is probably my strongest attribute as far as performing, but I felt like I could really bring something to this character if given the opportunity,” Cintron said.

He is not the only actor whose role involves some newfound dance routines.

Alyssa Donnelly plays the role of Katherine and also had to dance when auditioning for the role.

“I’ve been dancing since I was 4 years old, but this past year I started doing shows at the dinner theatre so doing theatre is somewhat new for me,” Donnelly said. “When I received the call that I got Katherine, it was a big deal for me, and I was ecstatic because I’ve never had such a big role.”

Donnelly noted that if she had the option to choose her role then she would have been a newsie.

“This show is truly about them — if you can’t tell by the title of the show —  and they are the backbone of the show,” Donnelly said.

Nevertheless, she is grateful for the opportunity to play such a strong female role.

Although she was never involved in the real-life strike that the musical was based on she did work for Joseph Pulitzer’s New York World press, and her name became a synonym for famous female reporters. So her inspiration for the bright, aspiring journalist in Disney’s “Newsies!” is not far-fetched.

Overall, Cintron and Donnelly both feel that the process of putting together the musical has been a tough yet worthwhile experience.

“The UTEP Dinner Theatre has a wealth of talent both on and off stage, and it’s so amazing to watch each person get to show off their talents whether it is in a performance capacity or technical capacity,” Cintron said.

Donnelly said that viewers can expect to see displays of courage and boldness on stage.

“The show highlights what it means to stand up and fight for a cause that you believe in,” Donnelly said.